Today we had Jett's 4 month dr. appt. & the dreaded shots that go along with it. I honestly think I hate the shots more than Jett does. He really only cries for a couple seconds, finds those thumbs, & he is good! I, on the other hand, think about those stinkin' shots for hours after they happen. It ends up being a great deal for Jett though, because I end up spoiling him rotten the entire rest of the day!

We have a really great pediatrician- Dr. Charles Moylan. He is so laid back, & lets us parent the way we want to. He makes me feel at ease everytime I have a concern, & as new parents, that is much appreciated! I was concerned that his weight had dropped from the 75% range to 50% range, but Dr. Moylan reassured me that he is doing just fine, & growing like he should. In Dr. Moylan's words- "He is perfect" {We agree, hee hee}
Here are his stats from todays appt.
Weight- 14.12 (50th%)
Height- 25.5 (75th%)
And this is what he's been up to:
He is rolling over {but only when he feels like it, which has only been about 5 times total}
He is squealing & talking
He is sleeping all the way through the night without a single peep {& lately has even been sleeping until 8-9 am}
He is sticking out his tongue
He is having stranger anxiety-which leads to him sticking out that bottom lip-which leads to me melting
He is grabbing at EVERYTHING we have in our hands
He absolutely HATES the carseat {I think it is because he can't reach his thumbs}
He loves his bath- hates the water getting on his face
He loves looking in the mirror {I would too, if I were that cute!}
I love this stage he is at right now. I miss him being a cuddly, snuggly little baby, but I love that he is coming into his own little personality! He is funny, silly, stubborn, & incredibly adorable, & I swear I could just eat him up!
Look how I found him when I went in to get him out of his crib this morning! Little squrimy wormy! 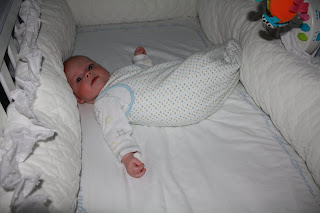 Posted by happeningsofourhome at 1:15 PM