You may remember me telling you that I am a bit of a planner, & that when things fall apart, I fall apart right along with them. Well, things fell apart today. And I quickly followed. Here's what happened...

Every Thursday we have Kindermusik class. All of you mommies out there know that it isn't the easiest task getting yourself, your baby, the big ol' diaper bag, & all of the supplies you may need for your one hour outing ready & out the door. But somehow, by the grace of God, we always manage to get to Kindermusik in one piece. Today marked a very special day at Kindermusik class- we could bring our little ones dressed up in their Halloween costumes!! What fun! I was very excited for Jett to have his very first "class" Halloween dress up party! I got up early to lay out his little costume, I packed up his diaper bag, got myself ready, fed him, & then I did something SO SO SO stupid. I knew that I would have to wake him from his nap to make it to music class in time, so I put part of his costume on him {black pants & a black shirt} to nap in so that when he would wake from his nap, I could change his diaper, throw on the other part of his costume, & run out the door. That's the problem with planning & having a little one- they don't ever go along with your plans. I am learning, folks. Slowly, but surely, I am learning.
I gently woke my tired little guy from his nap. He was groggy, but happy to be awake! Yay! Part of the battle won! I picked him up out of his crib, & felt something wet. NO!!!!!!!!!!! PLEASE NO!!!! NOT TODAY!!!! Sure enough, he had peed out his diaper {which of course he never does except for today, of all days} & onto his shirt & pants. THE shirt & pants for his costume!!! Almost immediately I could feel myself starting to unravel. As I was stripping him of his stinky, soggy costume, I started to feel tears welling up & my mind going a mile a minute -- Great. Now he doesn't have a costume. I can't take him to class without a costume. He would be the only one without one. We can't go. I spent all of this time packing, getting myself & him ready, & now we are stuck at home. Jett is going to miss his very first Halloween class party. Just fabulous. { Tears are falling at this point}. Maybe he could just wear a Halloween shirt- NO, that's dumb! How could I be so stupid to put his costume on early?! I should have waited until we were out the door - maybe even AT class before I put it on him. I know better!!! {I try to call Jared- no answer} UGGGHH! Why isn't he answering! I don't know what to do! I don't have anyone to talk to! Now I am going to sit at home all day & beat myself up over this!
Then my mind quickly shifted gears-- No. We are NOT staying home! This is much too important to miss! Jett doesn't know what he is wearing- he could be wearing just his diaper & could care less! We are going! Figure it out, Holly! Improvise. Throw something together. Wipe your tears. Get your big girl panties on. Do whatever you have to do- but get your butt to Kindermusik today!
I quickly scoured the closet for another shirt & pants {not my first choice, but whatever}, threw on the rest of his costume, & bolted out the door like a wild woman!
Once in the car, I calmed down, & almost had to laugh. Here I was 10 minutes ago, about to call my whole entire day off because of a little pee?! Seriously? Jett wasn't wearing the EXACT pants & shirt I had in mind, but in the grand scheme of things, who cares? I couldn't believe I had let something so trivial shake me like it did. I felt kinda silly. But then, I had to stop & give myself just a little credit. About a month ago, I actually would have called my whole day off. I would have said, "The heck with it. Jett's costume is ruined. My cheeks are stained with tears. I'm staying home." A month ago, I wasn't good at picking up the pieces after a meltdown- at bouncing back. But not today. Today, in the midst of the unravelling, the tears, Jett's screaming {that I falied to mention earlier}, I found my perspective. I sucked it up, & realized what is really important here. Not what we're wearing, not things going as planned, but that my son gets to go to class & have fun with his friends. It may not seem like a big deal to anyone else, but to me, it feels like growth. I am learning that life is messy, it's complicated, & it most certainly does NOT go as planned. I am learning to take it in stride & move on. That's big for me.
Kindermusik class was just as I imagined it would be-full of fun! All of the kiddos were dressed up & looked absolutely adorable- my little Jett Jett included {even with his improvised costume} :) We ooed & awwed over all of the adorable costumes {as there is nothing cuter than a baby all dressed up in a costume}. I am so glad I didn't say "the heck with it" & miss out on all the fun!
Undoubtedly, there will be more mommy meltdowns up ahead. Perhaps next time I feel one coming on, I will be able to take it in stride even quicker- you know, before the tears & all. We shall see... 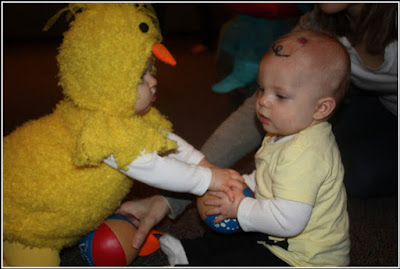 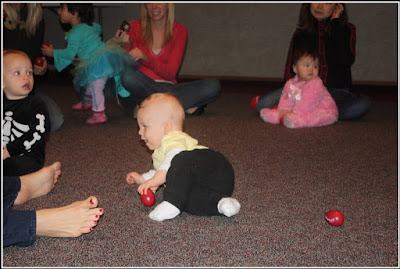 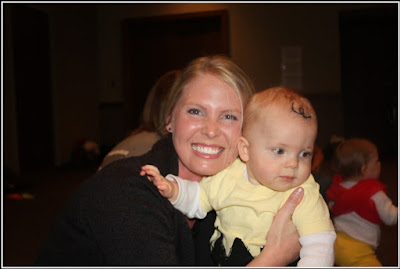 Posted by happeningsofourhome at 12:33 PM