a few more milestones to document!

"dada"
With Jett saying "mama" for quite some time now, I knew it was just a matter of time before DaddyBoy started to feel left out. Sure enough, the other day, when Jett crawled up to him & said, "mama", Jared looked at me, puppy dog eyes & all, & said, "I just wish he would say "dada". After hearing that, I quickly went to work with Jett- constantly saying "dada" to him, hoping he would pick it up if I drilled him with it enough! Usually he would just look at me, smile, & say, "mama"! Little stinker! Then on Sunday, what do ya know?!!! He said "dada"! It was the faintest, softest little "dada", you've ever heard, but Daddyboy heard it for himself, & was elated! Since Sunday, Jett has said, "dada" about a hundred times {I find myself saying "mama" to him, just to make sure I don't get left in the dust}! Whenever he says "dada", he looks around the room to make sure his Daddyboy is listening, flashes that big smile, & I see Jared melt right there on the spot. So precious!
closer to crawling
He is still doing his army crawl thing {the one with the dead leg dragging behind him that makes us laugh}, but a couple of times he has gotten up on his hands & knees & actually taken 2 movements forward! It's only a matter of time...
momma's cooking
The other evening I made baked chicken, rice, green beans, & crescent rolls for dinner, & guess who enjoyed his first "real" meal?! I cut up some chicken & green beans into really tiny pieces & our little meatball gobbled it right up! We were in stitches laughing as we watched him take fists full of food & literally shovel his dinner into his mouth! I am so glad to see he is a good eater- it's just the "shoveling" I am a little concerned about! Next on the list of things to work on- manners! And eating utensils! :)
moose a. moose & dora the explorer
Let me preface this by saying- I really am not a bad mother. I do not plant my 8 month old child in front of the television all day long. We spend much of our day playing, singing, reading books, & spending time outside. With that being said, I also do have to admit, that sometimes Nick Jr. does come to the rescue for this momma! If I need to make dinner, switch the laundry,or heaven forbid, go pee without my little guy attached to me, I will turn on Nick Jr for a little while. He loves the music & absolutely lights up {big smile, loud squeals, the whole sha-bang} when Moose A. Moose or Dora the Explorer come on! And just when I start to feel overwhelmed with guilt about letting my 8 month old watch t.v.; Nick Jr. reassures me that they are "like preschool on t.v."! Hmmm....right.
Here is a pic of the "Nick Jr. coma" 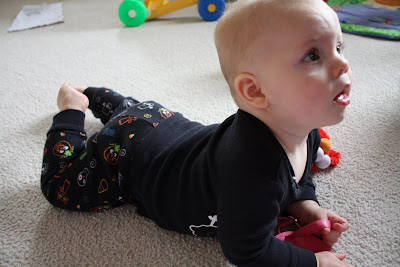 welp, those are our milestones for now! more are sure to come!


Posted by happeningsofourhome at 10:06 AM