Take Me Out To The Ballgame!

Hi friends!  Please excuse my neglecting the blog for the past several days.  We have been sick sick sick here at our house.  All three of us caught a bug & it has really kicked our butts.  Even Jared {who never gets sick} stayed home from work yesterday to get better.  Luckily, he's feeling much better & I sure hope that is a sign of what's to come for Jett & myself, considering we're still battling it.  Anyways, enough of that!


Today is the big home opener for the Royals!  Woo Hoo!  Jared is a huge Royals fan.  Actually, he's a sports fanatic in general, & is up for watching just about any game/any sport there is.  But it's most definitely the Kansas City Royals that he's got quite the soft spot for & come opening day, rain or shine, he's gonna be at that stadium cheering them on!

Wonder who Jared got that love for the Royals from?  None other than his own dad! 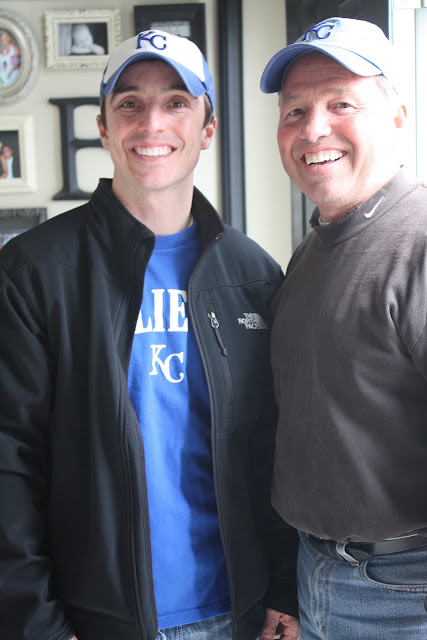 Every single Opening Day {I don't know exactly how many years it's been, but it's as far back as my brain can remember}, Jared & his dad have made it a tradition to get tickets, tailgate, & spend the afternoon out at the "K" together.  It is such precious father/son time for the two of them, & I think now that Jared is a father himself, that it even means a little more to the both of them.   I think it is so neat that both Jared & his dad carve out that special time for one another, clear their schedules, & have their little "thing" that is all their own. During those times out at the ball field,  I know they are making memories that will be etched into their minds forever, memories that penetrate their hearts & will stay there forever, memories that are simply priceless.  I can't help but think that it will only be a matter of time before Jett will be big enough to grab his own glove & join his daddy & "Coach"in their tradition!  And of course my mind doesn't stop there.  Even further down the line...I can imagine Jett,  all grown up with a family of his own,  calling Jared up & still wanting his ol' dad to join him up at the ballpark to cheer on those Royals!  I can only hope & pray Jett & Jared  have the kind of relationship that Jared & his own father have together.  I can only hope & pray that this timeless father/son tradition is just that--timeless.  That it lives on & on & on.