Jett man turned 13 months this week so I thought it would be fun to fill you in on 13 little "happenings" of his precious life!

1) He's walking!  But you already knew that--I shouted it from the rooftops & did an entire post on that alone!

2) He's going through milk by the gallons!  He transitioned wonderfully from formula to milk {which I am so thankful for} & he only takes a sippy cup now--no more bottles!  He has been such an easy baby when it comes to his eating habits!

3) He is eating 3 meals a day & two snacks!  This past week he has been a bottomless pit, & has been extremely hungry {growth spurt, perhaps?}.  The other evening he ate an entire chicken breast & two bowls of rice & broccoli {and just 2 hours before that, he ate 1/2 of a pb sandwich}!  Linebackers love them some food, I tell ya!

These photos are from the other evening when he crawled into the kitchen, opened the pantry, & helped himself to some graham crackers! 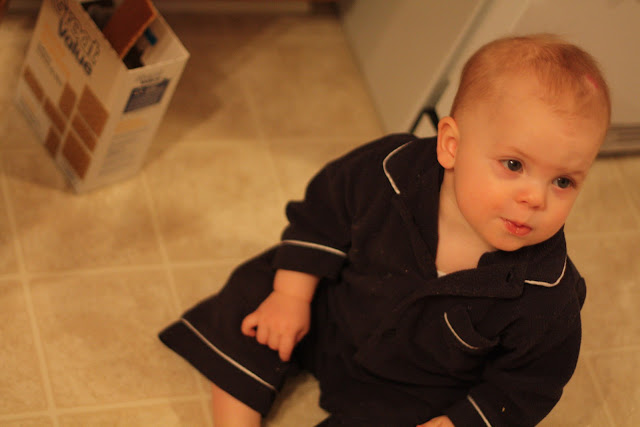 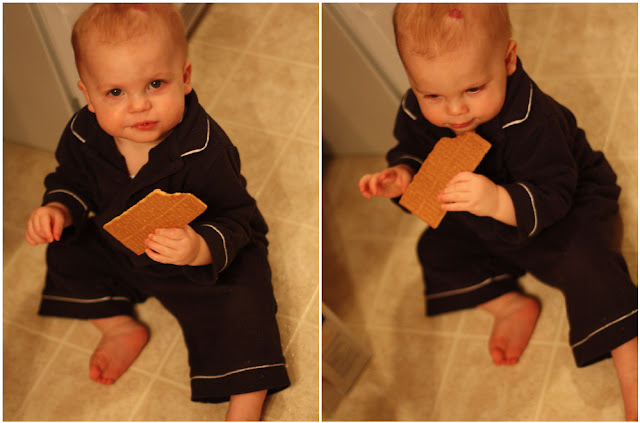 4) He sleeps about 12 hours a night--sometimes not waking up until almost 9 am!  Mommy loves those mornings!  He is still taking 2 naps & they can range from 40 minutes to 2 hours. I thought he was possibly ready for just one nap, but he couldn't handle it.  His growing body needs two still!  I don't put him down at an exact time every day, I just kind of follow his lead on nap times.  His naps generally end up falling around the same time everyday, though.

5) Chompers!  He has four top teeth, two bottom, & is cutting all four of his molars right now {one on top is already showing, & the other three are just sharp points right now}.  He has been a pretty good boy for cutting all of these {big} teeth at one time!  I had no idea until I caught glimpse of one & stuck my finger in his mouth to find that he has FOUR coming in!  He always has been one tough lil' cookie!

6) Backtalking big time! When he gets in trouble {like for throwing his sippy cup or food off of his high chair}, he responds with a "Na."{his way of saying no} & some other jibberish.  He gets a stubborn little look across his face & boy oh boy, does his will really showcase itself! I think I'd better get to reading "The Strong Willed Child" now to get a head start!

6) Our little climber!  He is constantly hoisting his leg up, trying to climb onto everything--the couch, ottomans, dishwasher, & kitchen drawers.  He hasn't quite got enough height on him {just yet} to master climbing on the couch & ottomans, but he has definitely conquered the dishwasher door & kitchen drawer! 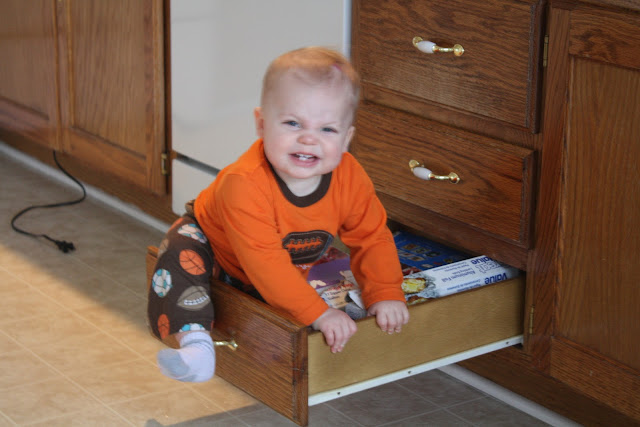 7) Signing!  He has been doing the sign for "all done" now for awhile {well, his version which consists of waving one arm quite rapidly}!  And just recently he started signing for "more".  It is the sweetest little thing to watch him gently take those little fingers & do the perfect sign for "more"!  I melted into a puddle at the grocery store one day when he saw me pick up a bag of fresh rolls from the bakery, & began bouncing in the cart, while signing for "more"!  It took all I had to not rip open that bag of rolls right then & there!

8) It's a Gymboree day!  Last month we started going to a Gymboree class.  He absolutely LOVES it!  It is wonderful for his social development & helps him to fine tune his motor skills, & I swear, while he's playing at Gymboree class,  you wouldn't be able to wipe the smile off his face if you tried!  We have even taken DaddyBoy with us a couple of times!  The minute we walk in the door, he is ready to get those shoes off & play, play play!  I think it is so important for him to have his little classes & outings.  I have already seen how it has helped him to become so very social & friendly!  And it gets us out of the house! =) 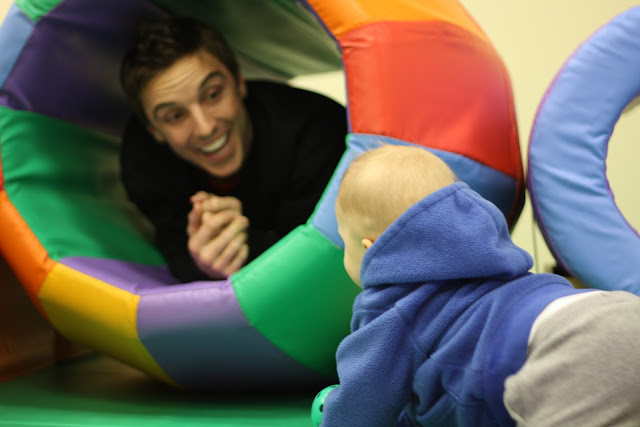 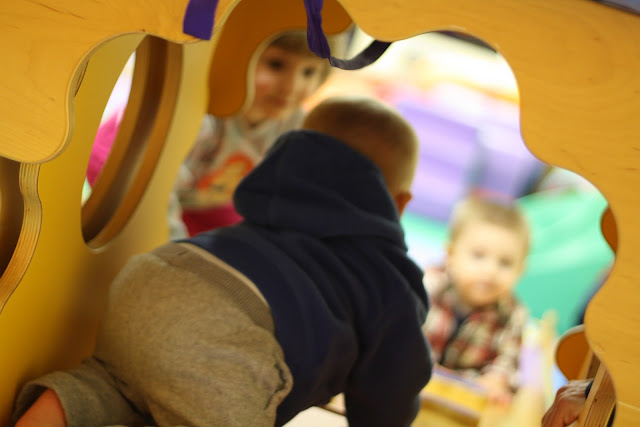 9) A new game.  His new thing is to go into a room or closet & shut the door behind him.  This always leads to him crying because he has locked himself in a room by himself, & then me opening up the door again, just for him to shut it once again--rinse & repeat.  It is usually the laundry room door when I am in the kitchen, or my closet door while I am getting ready in my bathroom.

11)  He loves his board books!  He will spend hours pulling books off his shelf, scattering them about his room, opening & shutting them, & looking at all of the pictures.  It is getting difficult to read an entire story to him, because he is constantly trying snap the book shut while I'm in the middle of reading it!  I know this is perfectly common with little ones, & we just read the pages we can squeeze in!  There are however,  a couple of books he will sit like a little statue for--"Brown Bear, Brown Bear" & "Trumpety Trump".  He insists that we read them over & over!  I love that he has already decided on his favorites! 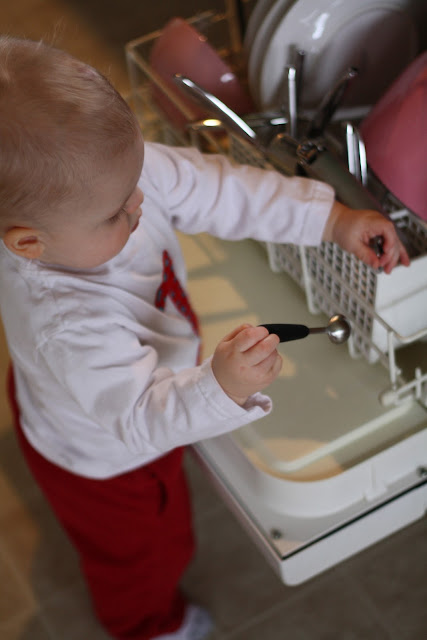 11) He is just beginning to lose that little baby look.  Once in awhile Jared & I catch tiny glimpses of the little boy he is growing into & can see his baby-ness slowly fading {tear}.

12) He's got moves!  This boy can dance!  If he hears any kind of music whatsoever, he rocks out some major dance moves!  He puts his head, shoulders, hips, everything he's got into it, & I just die!  I nearly lost it this week while shopping at Wal-Mart--a woman was walking by with her cart that had a janky wheel {it was making a very consistent "tap.tap.tap.tap" sound, & little Jett man thinks it's a beat & starts jamming out to it!  I could have died I laughed so hard at him!  Never a dull moment.  Never.