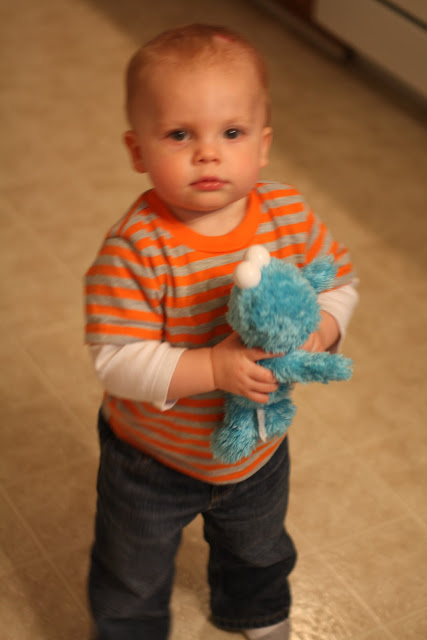 How in the world can it be that my little meatball is already 14 months old?!  Good gracious me, the months are just flying by!  Remember back when Jett turned 11 months, & I said it was my favorite age?  Well scratch that, cuz 14 months just trumped 11 months!  Oh, who am I kidding?  Every month trumps the next!  I fall more & more in love with this little boy every single day of his life, & my life becomes more & more fun simply because he's in it!

So here's what the little chubbers has been up to this past month!


* He has added some new animal sounds to his repertoire!  For an elephant sound, he cocks his little head back & makes a "phhhhhhhhhh" sound that is the cutest thing I have ever seen or heard!  To be real honest, I'm not even sure if he even knows what an elephant is, but Momma made sure he knows what one sounds like!  He loves to do the elephant sound, & will bust it out pretty much every time we ask him to {which is great for times when we want to show him off to his grandparents}!  He also has figured out the sound a monkey makes {this one we have to work a little harder for}.  He giggles at me while I make the obnoxious monkey noises, & once in awhile {if we're lucky}, he'll open his mouth real wide & say "Ahh Ahh".  Too cute for words, I tell you!

* Here lately, our little social bug hasn't been his social little self.  The past couple of times we have been to our Gymboree & Music class {which he loves}, he has been very clingy to me.  He used to be Mr. Independent, running off on his own, only checking once in awhile to make sure I was still around.  But recently,  he wants me right by his side, & sometimes he won't even let me put him down.  He is much more skeptical of trying new things, meeting new people, & being in new environments.  He moved up to the toddler class at church, & ever since then, he has cried when we drop him off.  I know it's a completely normal developmental phase that not only all children go through, but are actually supposed to go through, so I'm not worried about it one bit.  It's just so funny to see how he is developing & changing in just a matter of a few weeks!  It makes me wonder what his little personality will look like once he's gone through all of the phases!

* The kid still loves his grub!  It makes me laugh, because if I mention the words breakfast, lunch, dinner, snack, eat, or drink--he gets so excited & makes a b-line to his high chair.  If I don't get there quick enough, he gives me quite an earful!

* He's sporting two more teeth--the bottom lateral incisors!  Now he's only missing his cuspids {canines} & his 2 year molars!  That's a whole lotta teeth, but according to all of the charts I've looked at,  he's right on track!  I love his adorable little smile!  And thankfully, he has been a very easy teether.

* He still hates fruit {with the exception of bananas}.  I have tried every single fruit at the supermarket.  I have tried giving it to him cold, at room temperature, sliced, cut up, peeled.  You name it, I've tried it.  The kid is not having it.  It's the same response every time--a crinkling of the nose, & proceeding to either push the fruit clear to the edge of his highchair tray or dropping it off the side onto the floor.  Luckily, he will still go for the baby food pureed kind, so I'll keep giving him that until people start looking at me like I'm a weirdo because my 5 year old is still eating baby food.  Just kidding...I won't let it go that far!

* He loves to go!  He doesn't care where we are going, he just likes to be out & about!  But his favorite thing about going places--putting on his shoes!  When I say it's time to go, he loves to run to his closet, pull out his shoes {almost always mismatched}, back up into my lap, & have them put on his feet!  I have to be careful not to say that we are going anywhere before I am completely ready for his shoes to be put on, because once he hears, "go", it's go time!  The other day he was so mad because I was still gathering up my things & here he comes flying down the hallway, a shoe in each hand, flailing them in the air, madder than a wet hen!  I had to laugh!

* He's quite the little chatter box.  I have no idea what he is saying, but he will carry on a blue streak, allowing for my occasional "Oh really?" or "You don't say!"  I always wonder what is going on in that mind of his, what it is that he is trying to tell his Momma.

* He is the busiest bee I have ever witnessed.  Now that he has completely mastered walking, he is into EVERYTHING!  It is not uncommon for a roll of toilet paper to be strung across the bathroom, for every single pair of socks I own to be strewn across my bedroom floor, or for every last pot & pan to be scattered about the kitchen!  And that's not even counting the toys that cover the living room floor every day, all day!  But you know, I don't really mind the many messes.  In fact, I actually like looking around & seeing a home that is lived in.  I love the little reminders that the sweetest little toddler I have ever known lives here at my house, & makes one big mess of it!  These days are priceless.  Someday he won't be interested in pulling toilet paper trails all throughout the house, & I'll wish he was.  My house may not look perfect, but it sure feels perfect to me!

* I've said it before, & I'll say it again...I think we've got a strong willed child on our hands. With that said, I also have to say that he really is a great little boy.  He listens well, & even minds when he is told no {for the most part}.  He doesn't throw big tantrums {I know, it's probably coming soon}, & overall I would say he is a very easy toddler. But sometimes, when he gets in a mood, usually always at dinner time, & he decides he wants to do something he's not supposed to, he is on a mission to win!  The other night, he was chucking his food off the side of his highchair, & when Jared told him to stop, he continued to look Jared dead in the eye & pick up food & continue to toss it to the floor--one piece after another.  Jared then went to take the top tray from his highchair away, & Jett grabbed onto it.  Finally, Jared pried each little finger off of the tray & set the tray aside. End of that fight, right?  Wrong.  Jett proceeded to PRETEND to take imaginary food from the tray & drop it off the side, the whole time not taking his eyes off of Jared.  Jared & I just looked at each other like, "Oh boy.  We're in for it."  And then Jared told me that Jett's little attitude looks a whole lot like his Momma's little attitude.  Who me?  Couldn't be!


He's our little love bug!  He is now giving us kisses when we ask for them {well, sometimes}!  The big slobbery, wide open mouth kisses!  For awhile he was saving all of his kisses for me & me only {which I have to admit, made me feel pretty darn special}, but in the past few days he has started laying them on his daddy too!  Of course we just melt into a puddle every time he lays one of his big sugary smacks on us!  Talk about a little heart breaker!


I am soooo enjoying this toddler stage!  It has been amazing to watch him grow & learn.  I can't get over that just a year ago he was this tiny baby {well, he was never tiny, but you get the drift}, & now he is this little person, running through my house, adding life & energy that makes my heart want to burst!

I know in my heart that these days are the best ones of my life,  the ones I will always savor & hold onto forever.   One day, they will be the days that I long to have back.  They are the days that all of the little old ladies at the grocery store are referring to when they stop me to say with shaky voices & tears in their eyes, "Honey, you enjoy these days.  They go by so fast."  Oh, believe me, I am enjoying.  I am savoring.  I am holding on as tight as I can.  I am absolutely loving these days!

Now if you'll excuse me...there's a little boy waking up from his nap & he's calling for his Momma! 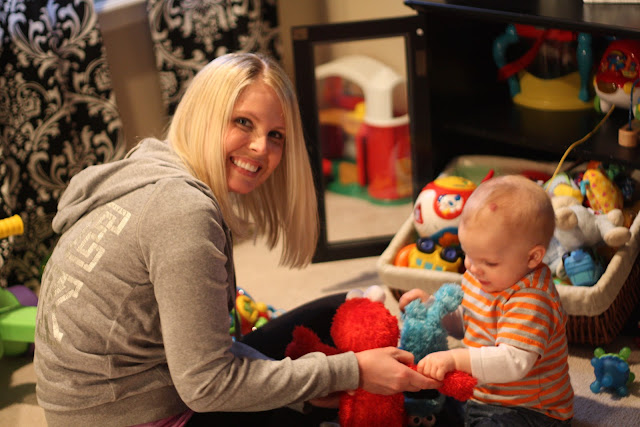