My baby is sick.

I know all of you mommas out there can feel my pain.  I know I don't have to tell you that one of the worst things about carrying the title of "Momma" is having to watch your little ones suffer right before your eyes.  If you've been a mother for more than a single moment, then you've most likely already experienced this truth for yourself.   Having to look into their sad 'sick' eyes & wipe away the tears that stream from them.  Watching the clock slowly ticking by & praying the stinkin' tylenol would just kick in already.  Holding their hot feverish bodies close to your own, just wishing you could take the pain on your own shoulders & ease theirs.  Yeah, you know exactly what I'm talking about.

I also don't have to tell you that one of the best things about carrying the title of "Momma" during these sick moments, is that when your precious baby lets out that cry that sounds just slightly 'off' from their normal, fussy, tired cry, it's you & only you that can race to their side & give them just exactly what they need.

I was reminded again last night of just how much my "momma's touch" is needed.  How that when my baby's world is crumbling &  spinning out of control, the only one that can swoop in & save the day, is his momma.

Jared does the bath time routine with Jett every evening.  It's a time that the two of them get to spend some one on one time together & it gives me a chance to get the kitchen picked up after the dinnertime mess.  Jett splashes & plays, the two of them talk "guy stuff", & then Jared gets him all lotioned & jammied up for the night.  Sometimes Jett gets a little fussy at the end of the bath or while he's getting dressed, often times because he's overtired & really ready for bed.  But last night, the cry I overheard coming from the bathroom wasn't a fussy or tired cry.  It was a wail, an all out scream for help, & you'd better believe I made a mad dash sprint to get to him as fast as I could.

I barged in to find Jared holding Jett in a towel, bouncing him in his arms, looking to me with complete desperation in his eyes.  Jett's face was beet red, & he was screaming relentlessly, hot tears flowing down his face.  Without hesitation, I swooped him from Jared & not giving it a single thought, got down to Momma business.  I rushed him to his nursery, where I held his wet slippery body against my chest, swaying, rocking, constantly moving until his crying dwindled to a whimper.  I whispered "shushes" & "It's okay, Mommy's here" repeatedly into his ear until finally he settled down & was calm.  We got him all dressed in his jammies & when I picked him up, he fell limp onto my chest, closed his eyes, & almost immediately drifted off to sleep.  I sat down in the rocking chair with him, resting my cheek against his burning head, & held him there for a long time.  He let out a few little whimpers, followed by a great big sigh, & then it was a steady snore from there on out.

I honestly haven't got the answer.  All I do know is that when my baby looks into my face with pleading eyes to make everything all better, well, you'd better believe I'm gonna use the "momma's touch" I've been given to do just that. 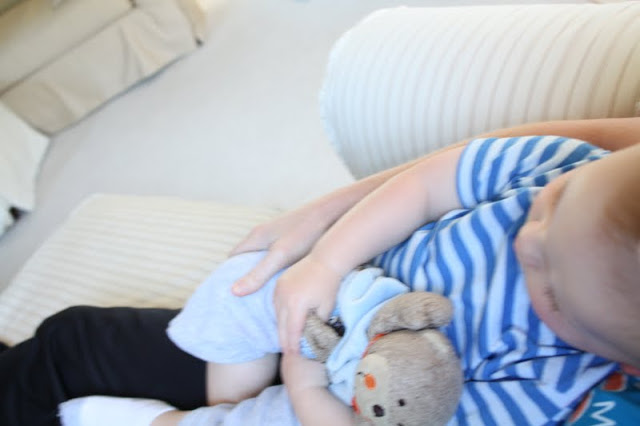 Posted by happeningsofourhome at 7:54 PM