Nine months pregnant.
I must have packed & re-packed that hospital bag over a dozen times.  I was pratically oozing with excitement.  I loved pulling out those tiny little baby clothes & neatly organizing them into perfect piles. I loved twisting the cap off the bottle & sniffing that delicious scent of baby lotion. I loved holding those teensy socks in the palm of my hands, knowing that soon, little feet & itty bitty toes would wiggle inside them.  I had been dreaming of becoming a mommy for so long, dreaming of rocking & holding & smooching that baby of mine, & for some reason arranging & rearranging that bag over & over again was a steady reminder that all of this was really going to actually happen.  That my dream of motherhood would soon become my reality.
But I wasn't the only one who was giddy with excitement.  I wasn't the only one with dreams & plans & visions for this brand new life about to be born into the world.  Daddyboy was dreaming big dreams, too.
I won't ever forget opening up that bag to take one last glance at all that we would be hauling with us to the hospital {okay, okay, & maybe to organize it for one last time} when I found something lying there that I knew for a fact I hadn't packed.  On top of that little pile of baby clothes laid a tiny blue ball cap.  And even though that ball cap was two sizes too big & not at all soft enough to put on a tender newborn's head, there was no convincing Daddy that we weren't bringing that ball cap to the hospital for his little boy.
Yes, Daddyboy was dreaming big dreams, too.
And just here recently, I watched as Daddyboy's eyes filled up with pride, I watched as his heart swelled with love, & I watched as one of his very own Daddyboy dreams came true. 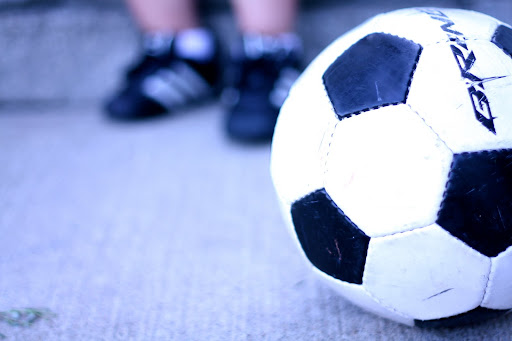 Little mister with a soccer ball at his feet. 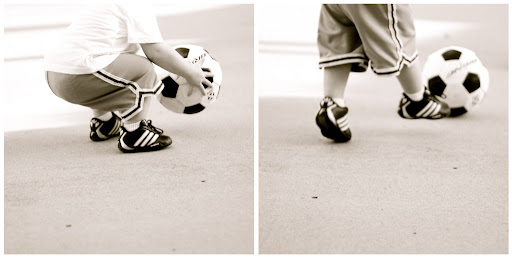 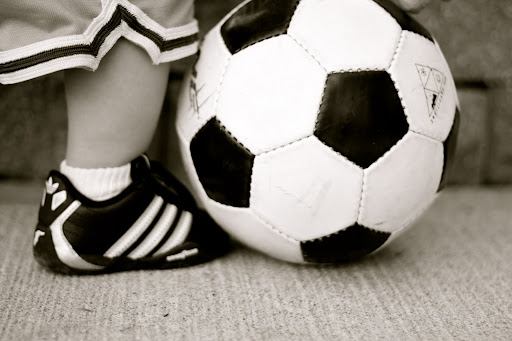 Daddyboy's grooming Jett to be quite the little soccer star.  He's spending the evenings running around on hot pavement in an attempt to teach Jett all the fundamentals: the proper way to kick a soccer ball, how to pass with the inside of his foot, & of course how to score a goal that'll make the crowd go wild.
I know I'm partial, but for a one & a half year old, little mister has got some skills {at least when he's not trying to color the soccer ball with an orange piece of sidewalk chalk, anyways}! 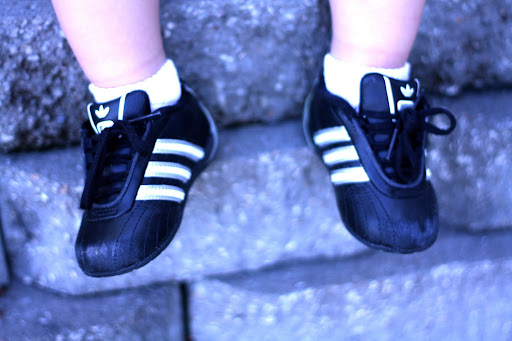 {We've had these little Adidas shoes for months & months just waiting for the day.  The day has come.}
And even though it's soccer that Jared has pulsing through his veins & has ever since he was a young boy, he's still making sure that his own son becomes a perfectly well rounded little sports star.  We wouldn't want to limit him to pro soccer when pro baseball could be in the cards as well, right? 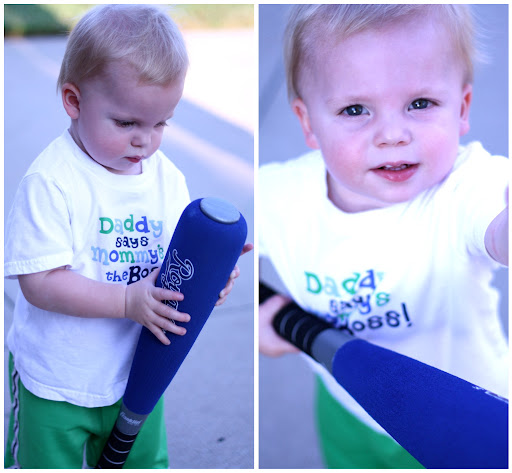 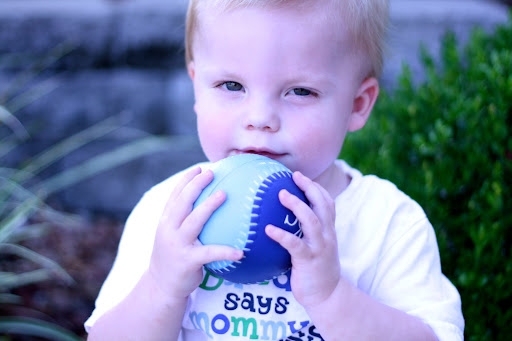 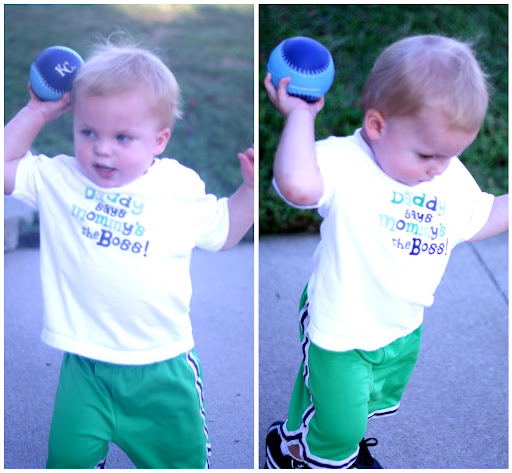 He's got the throwing part down pat.  He can chuck a ball {or a toy or a piece of food, for that matter} like no man's business.
And now, we're working on the catching part.  He cups those little hands & tries his hardest to grasp the ball as it comes sailing towards him. 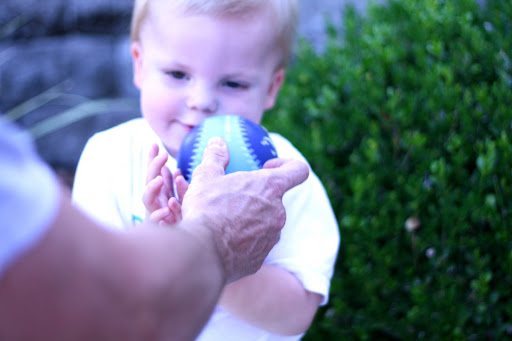 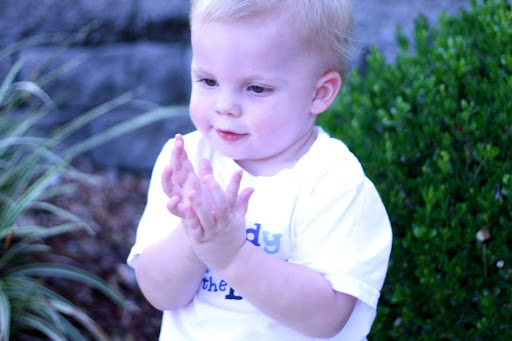 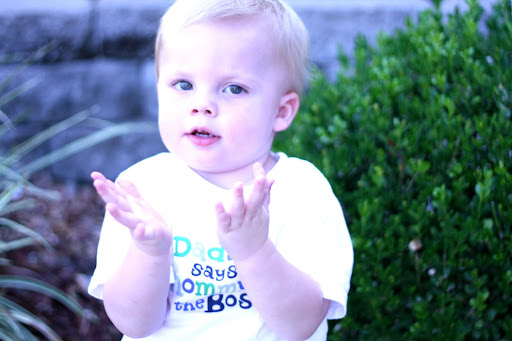 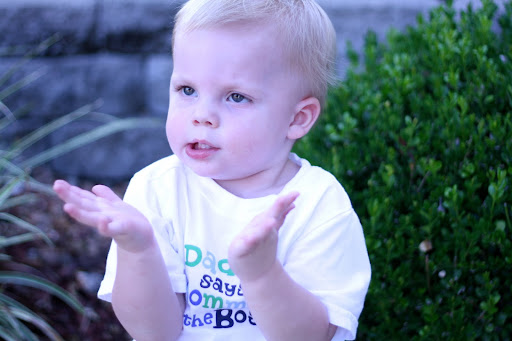 It's so exciting, watching your very own child conquer & master new skills. It leaves me daydreaming--what will he be good at? What is it that will pulse through his veins & inspire him, move him, & challenge him in his life?  Will he pelt a soccer ball down a grassy field & into a net like his daddy dreams for him to do?  Will he hoist a baseball bat over his shoulder & crank a ball into the outfield while we cheer from the stands? Or will he do is own thing, find his own hidden talent, a talent that has nothing to do with sports at all...

Only time will tell.

For now, all that matters is the fun we are having out on that hot pavement in the evenings.  The laughter that abounds after he chucks a ball & it bounces off the side of mom's head.  The million dollar smile my husband flashes as he watches his little sports star toddling right along in his very own footsteps. 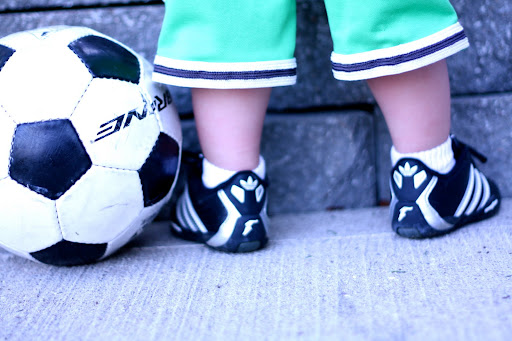 And for fun--our sweet, perfect newborn & that little blue hat I was talking about {sniffle}. 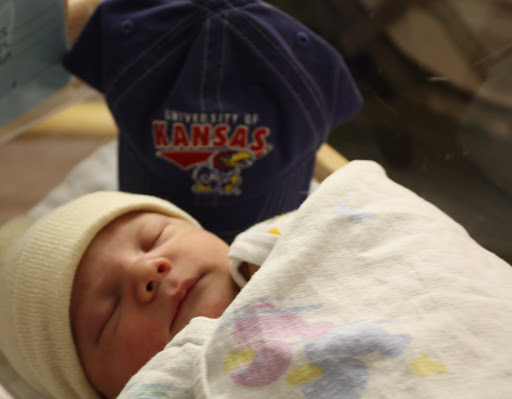 Posted by happeningsofourhome at 6:33 PM