To Thine Own Self Be True

I've thought about writing this post a million times.  I've let the feeling rise up in me.  I've let the words begin to swirl around in my brain.  And then every single time I've attempted to entertain the idea of putting those feelings & words out there for the world to see,  I've chickened out.

I don't want to appear vulnerable, or insecure, or god forbid-human.

But the truth is, I am vulnerable.  There are areas of my life that I am insecure about.  And unfortunately, I am nothing more than human.

I've shared on my blog a time or two that I have a hard time of letting my guard down.  There are very few people in this world that truly know me--the real me-- the Holly that cries & hurts & shows the parts of my life that are less than perfect.  The parts that have shaped & molded me into the woman I am today.  The thought of sharing my heart absolutely terrifies me,  for fear that it will be judged or even worse, rejected.

A few months back, someone took a jab at my blog.  It was actually more of an indirect jab--you know the ones--where they write a mean comment on facebook & hope that she {meaning me} sees it, kind of jab.  But a jab, nonetheless. Well, it was a success {for the jabber, anyways}.  I saw the remark on facebook & immediately knew it was intended for me.  And while I wish I could say that I just laughed it off, that I took it in stride, that I didn't let it bother me,  unfortunately that would be my guarded, unreal self talking.

Because the truth is, that little snide remark on facebook that was directed at me?  It stung.  It hurt.  It did bother me. You see, this blog of mine is something that is important to me.  It's special.  It's personal.  It's my heart & my life & all of the little details that make up my little family poured out for the world to see.  It's my outlet as a stay at home mom.  It's the way I capture our memories so that I can treasure them forever.  It's the intimate details of my day to day life.  And ultimately, it's a way for me to let down my guard so that others can know me.  I know to some people that may seem like no big deal, but for someone who doesn't easily open up, it's kind of big deal to me.  And to have someone come along & attack that with a few hateful words, to mock it & make fun of it, it's not a feeling that I would wish to make anyone else feel.

So what did I do?  Well...I'll tell you what I wanted to do.  I wanted to tell that girl that being a "mean girl" was cool way back in high school, but at thirty something...not so much.  I wanted to tell her that you get a lot further in life by being kind.  Honestly, I wanted to tell her off.  But that's not me.  It's not who I desire to be.  And it's definitely not the example I ever want to set for my own son.  So instead, I huffed around internalizing it all, asking myself why in the world this person would go out of their way to treat me this way.  I griped about it to my husband & he urged me to be the bigger person & just let it go. I called up my best friend & we laughed & made light of it, & she reassured me of my awesomeness {gotta love a best friend pick me up}.  And after a couple of hours of stewing about it, I got over it.

Turns out, I didn't really get over it.

Instead, what I did was revert to my old trusty ways & throw up my sky high guard.  I changed my writing style.  I became cautious.  Where at one time I would just ramble & express myself all over these blog pages without a care in the world, I now was critiquing every word, every comma, every exclamation point.  I began reviewing my blog posts through the perception of the jabber--what would she have to make fun of, what would she have to mock at, what could she poke & prod at?  And over the past few months, blogging changed for me.  Where it once was something I was eager to do, it slowly became daunting & draining.  I knew there were criticizing eyes watching my every move, just waiting for me to screw up, & that took the fun out of something I had always looked forward to.  Sure, I was still documenting our lives.  I was still telling our stories.  I was still displaying our pictures.  But the narrator behind those stories & pictures, I no longer recognized. It wasn't me anymore.  I had let someone squelch my voice.  I had allowed someone to make me feel like my life, my heart, what I have to say, that it isn't worth anything.

And then, just about a week ago as I sat down to blog, it hit me.  As I sat there contemplating my every word, checking my grammar, looking for errors in my writing, making sure there was nothing substantial to use against me, I realized that this is all just ridiculous.  I realized I am being more true to someone else than I am my own self.  Geesh.

What message am I sending to my son if I show him that every time somebody hurts him, to throw up a shield or to stifle the voice that lies within him?  I have to teach him that there will be people in his life that will attempt to knock him down.  There will be people that don't like his ideas or the way he lives his life.  And sadly, there will be people that are just plain mean--that make a sport of tearing others down.  I have to empower him to be strong & confident in the person God made him to be.  I have to raise him to know that he doesn't have to squelch any part of himself for any single person.  He's enough.  He is fearfully & wonderfully made {Psalms 139:14} & no one can come along & snatch that away.  I have to show him that there is freedom in being real, power in being kind, & something to be said about being able to shrug off the small stuff.

So... with all that said, a few months after the fact, & a super long blog post later...I can officially say--that little jab--I'm now laughing it off, I'm now taking it in stride, I'm now over it.


And from now on, you'll be getting the goofy Holly back. The silly Holly, the sensitive Holly, the secure  AND insecure Holly, the Holly that makes up words & uses too many exclamation points, the unguarded Holly, the real Holly.  It's MY voice you'll be hearing behind all of my life happenings. 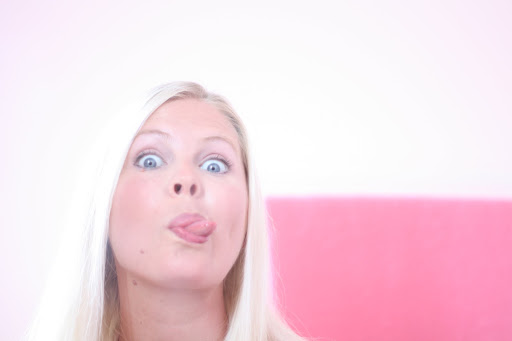 "To thine own self be true, And it must follow, as the night the day, thou canst not then be false to any man."
--William Shakespeare


Posted by happeningsofourhome at 1:59 PM