It was a good Saturday.

Our church fired up it's annual Happy Five Soccer League bright & early this morning up at the ADP Sports Park & Jared was one of the first ones out there.  He laced up his cleats & hit that soccer field running, all geared up to meet the little players that would make up his team this season.  My husband has an unwavering passion for Jesus Christ, a heart for serving others, & the sport of soccer racing through his veins. Having this Happy Five Soccer league, where all of those elements are intertwined together--where he can coach a team of kids in the amazing game of soccer, where he can spend time ministering to people, & where ultimately he can serve the Lord Jesus Christ & help others to know more about the Savior that died for their sins--well, I guess you might say he's totally in his element.  Those early Saturday mornings up there on those soccer fields have become a part of who he is.  And I love that for him.

On the mornings that we're not up on the sidelines supporting Daddyboy, we're off making our own adventures.  A little something  I call  "Single Mom Saturdays".  On said days, we skip the soccer fields, meet up with friends & go find some happenings of our own.

This morning it was a local parade. 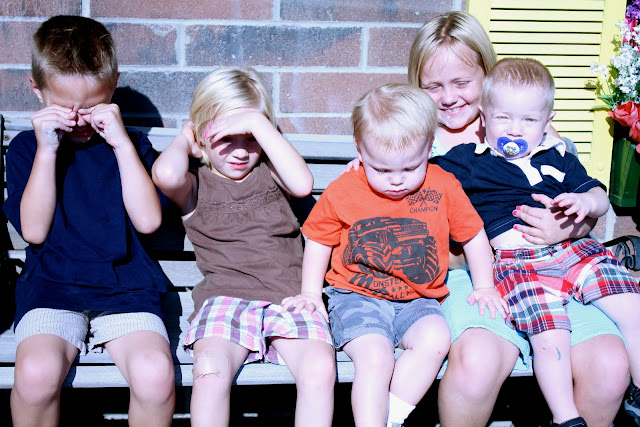 Perhaps it wasn't the greatest idea to snap a photo of children looking directly into the sun.  They really loved that. 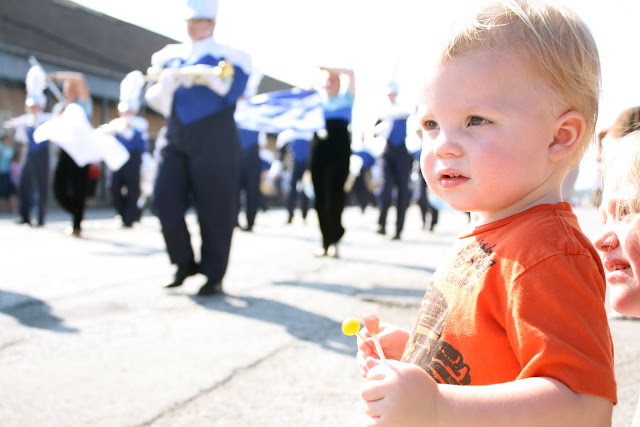 A lolly in each hand...that's how we roll. 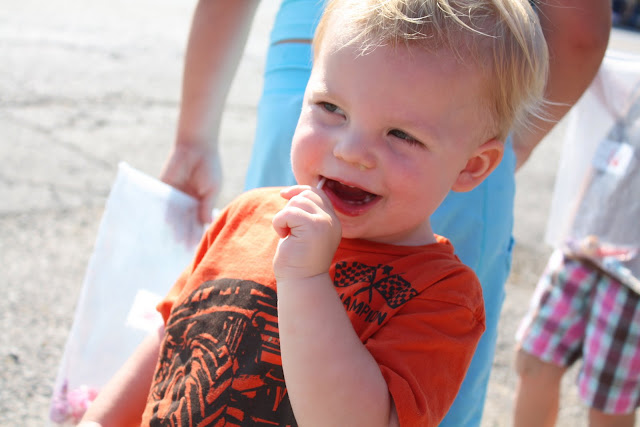 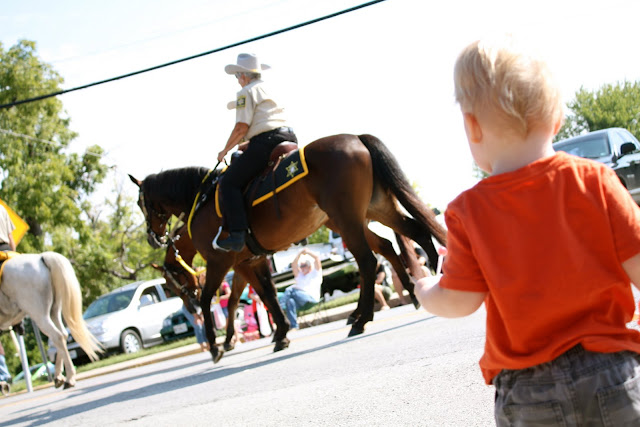 Once Jared got home from soccer & after Jett's little nap {You heard me right.  I said little nap. We're still battling that one out}, we loaded up in the car to ride off into our next Saturday adventure.

First destination--Coach & Gigi's.  We dropped Jett off to have some afternoon fun with his grandparents!

Second destination-- LIVESTRONG sporting park.  You guessed it, more soccer.  Tis the season, after all. 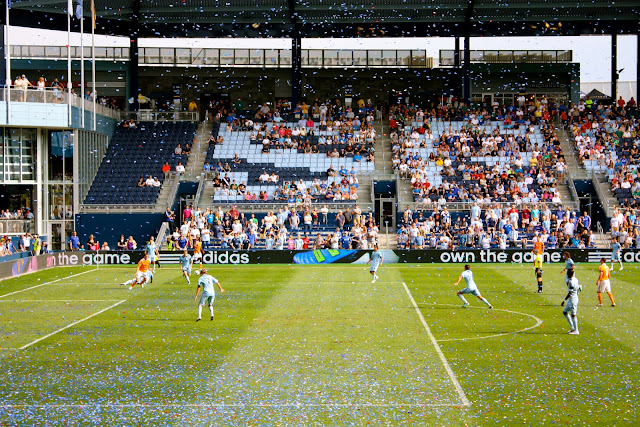 Let me tell you, I am totally that girl who's the first one to say, "Sign me up!" when it comes to spending an afternoon/evening out at a ball game.  Major league baseball, minor league baseball, football, it doesn't matter-- I enjoy it all.  I love the atmosphere, the tradition, the history, the camaraderie, the peanuts, the memories made, but mostly, I love the way it makes my hubby so happy.
Now with that said, I have to confess that I am totally not that girl who gets all into those sports.  I'm pretty sure I like going to sporting events for all the wrong reasons. You know, for the people watching, the chatting it up with friends, the consuming of the junk food.  I get bored of watching the game & at the end I usually haven't got a clue as to who the victors were.  I think I like the thought of loving sports more than I actually do.
Until today, that is.

Today marked my very first pro soccer game, & can I just say... it rocked my world?!  I couldn't take my eyes off that field.  I watched every move like a hawk, boo-ed the officials with the rest of the roaring crowd, & leapt to my feet, screaming at the top of my lungs when that ball would swoosh into the goal--which it did. Three times {look at me go--paying attention & all}. I made my husband so proud. 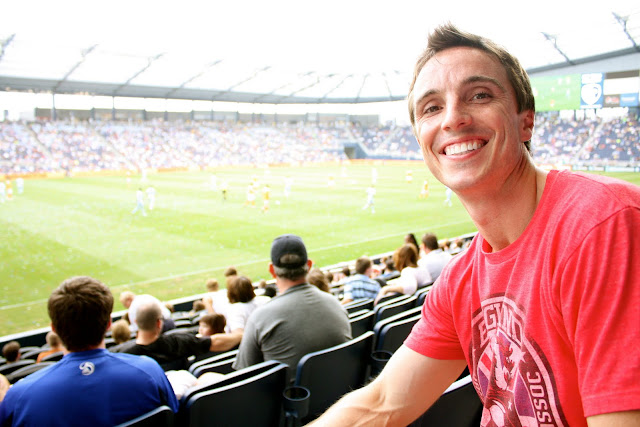 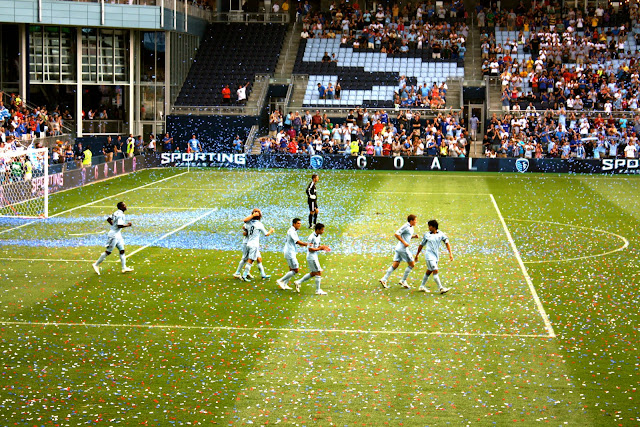 Confetti on the field.  Confetti in the air.  It was like this the entire time.  Pure awesomeness. 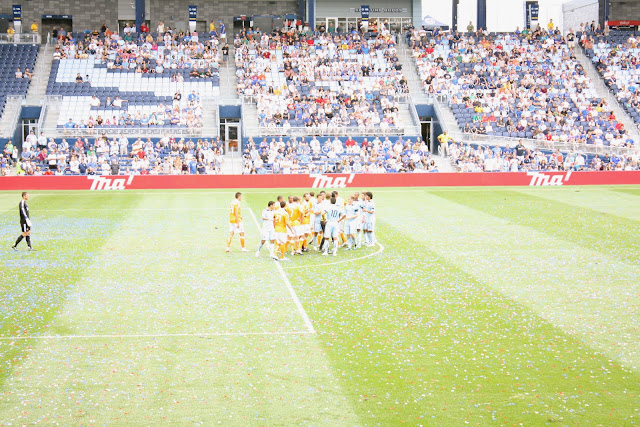 A little tiff on the field.  These boys are scrappers!
Man, I still get pumped just thinking about it.
I still can't tell you the name of the team we played {they wore orange jerseys & their players were big babies, but that's all I've got.}

But what I can tell you is that the final score was 3-0 & that I've never been more excited over a win in my life.

I guess it's safe to say I've got a thing for soccer players.  Good thing I've got one of my own *wink*.

Oh, & as if the day hadn't been great enough, on our drive home this evening, amongst wispy white clouds & baby blue skies, a hint of a rainbow put on a little show for us. 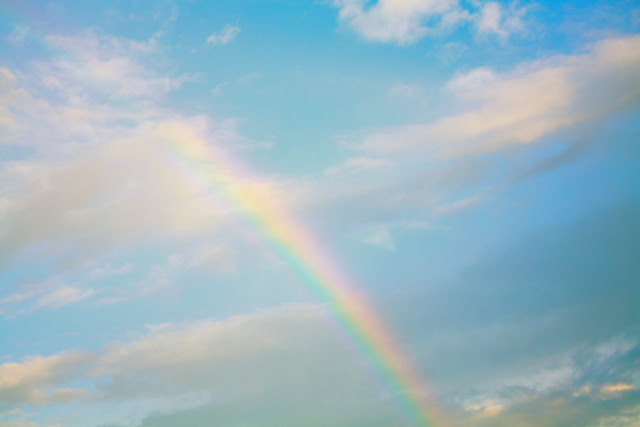 I heart Saturdays.
Posted by happeningsofourhome at 7:59 PM