Fun On The Farm

We haven't left the house much here lately. I just can't seem to find the strength to muster up any kind of motivation these days. Even getting to the grocery store to buy our everyday essentials has been an extremely daunting task for me, & I seem to come up with every excuse possible to put it off. But with an energetic toddler running around like a madman, it's hard to look at him going stir crazy & not feel guilty about forcing him to stay within the four walls of our home day in & day out.

Lucky for us, we've got some great friends who came along, dragged us out of the house, & insisted that we get some sunshine on our faces. Just what the doctor ordered....for me & for Meatball.

Deanna Rose Farmstead is an absolutely adorable place to spend an afternoon with friends, so my best friend & I, we loaded up our kiddos, all of our snacks & drinks, & we made the hop, skip, & jump over to find some fun on the farm!

And sure enough, we found some fun, alright! 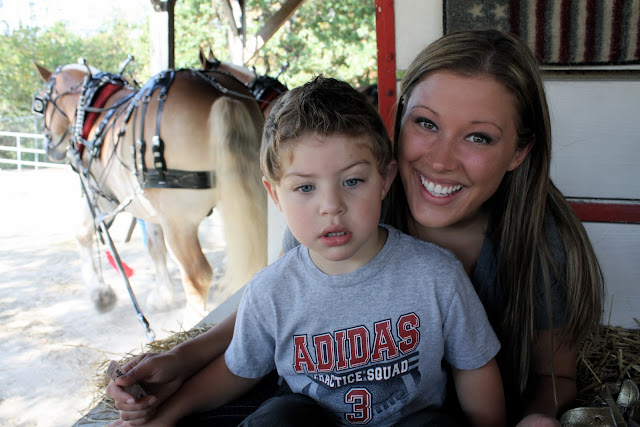 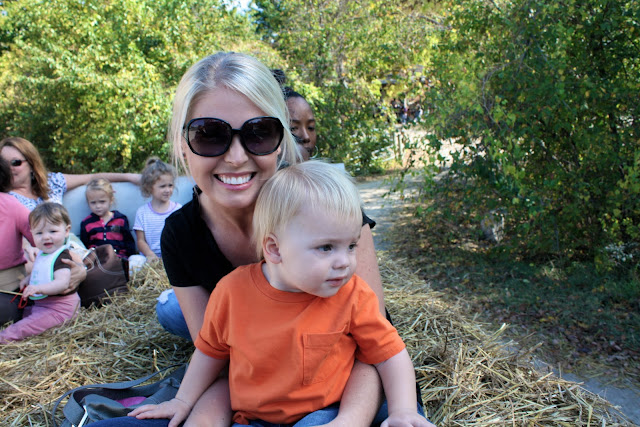 Once we arrived at Pumpkin Hollow, the boys hit the ground running & had an absolute ball!  I think the corn maze was the biggest hit of the day.  Wouldya look at the excitement on those faces?!  They chased one another, squealed, screeched, & ran til' their little faces turned cherry red!  A tale-tale sign of pure fun being had. 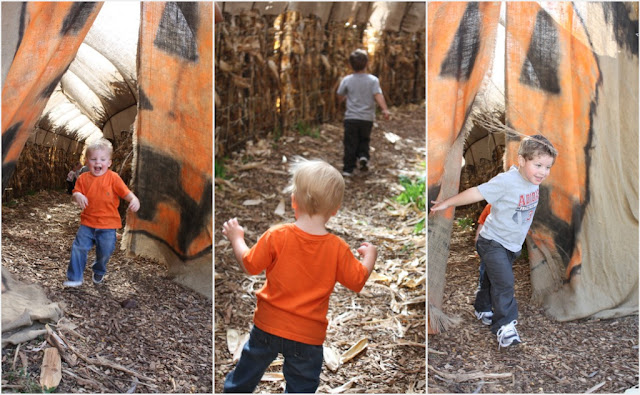 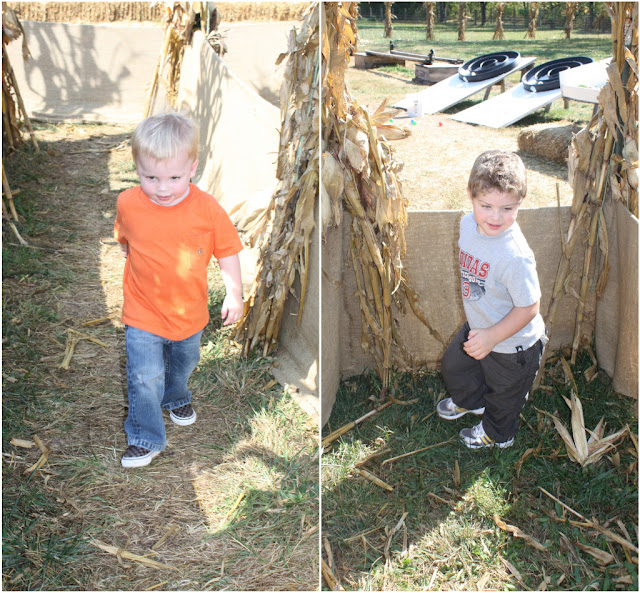 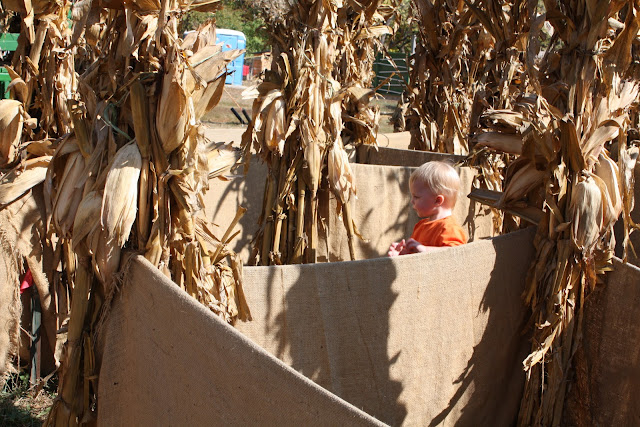 They climbed up big bales of hay to find a steep, slippery slide waiting on the other side. Of course Jett wouldn't touch the hay so I had to carry his butt to the top every single time & then race down as fast as I could to catch him. 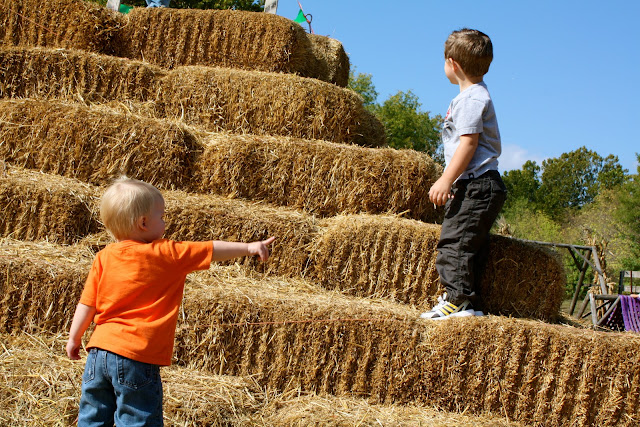 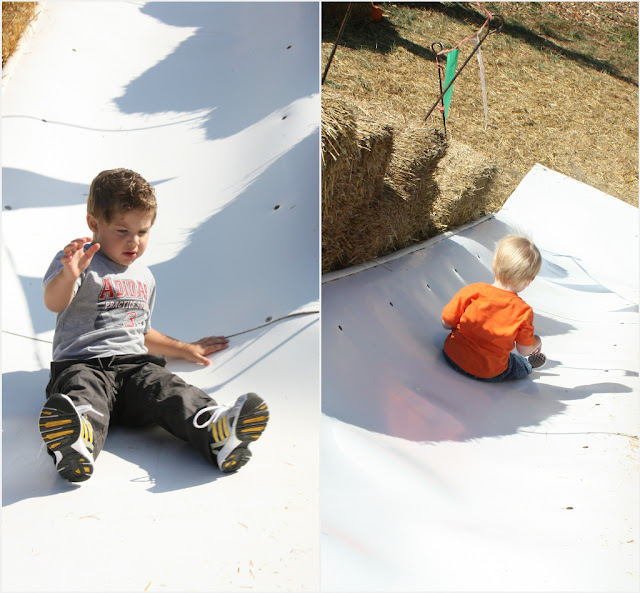 While Meatball would have no part in letting his hands come close to touching the dry, scratchy hay, he sure had no problem grabbing fistfuls of filthy dirty corn to throw, scatter, & fill up buckets with {when he wasn't wearing the bucket on his head, of course.  Silly boy!} 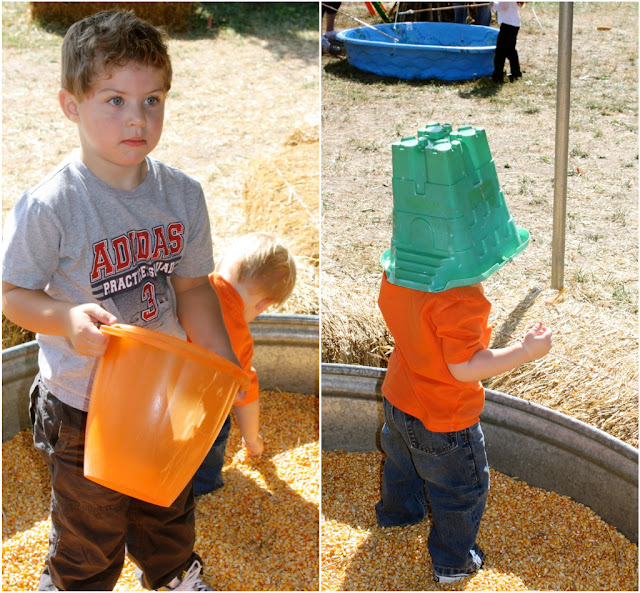 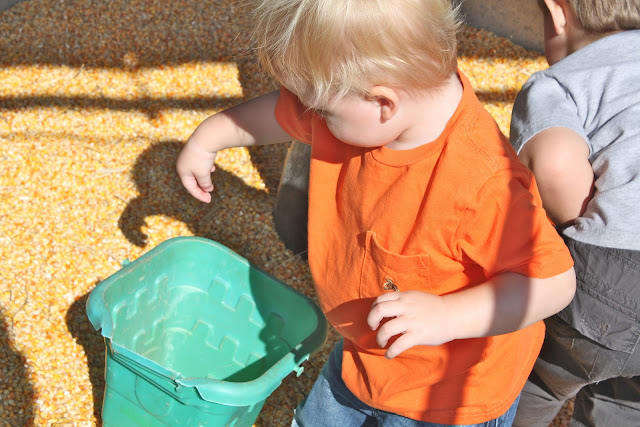 The boys got quite a kick out of the old fashioned water pumps that are placed throughout the farm.  They stood at either ends of the water cranks, laughing & giggling as they watched each other works so hard to get that water flowin'. 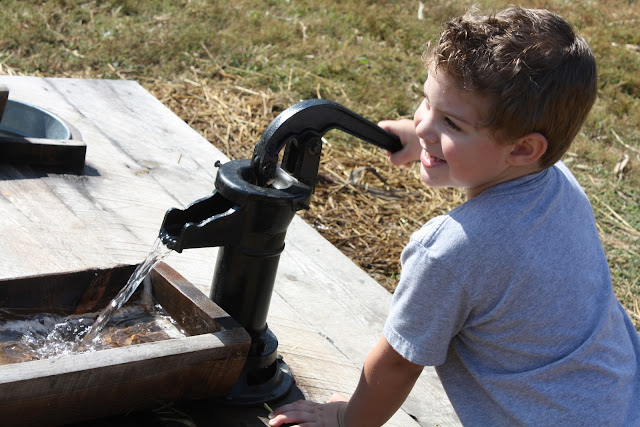 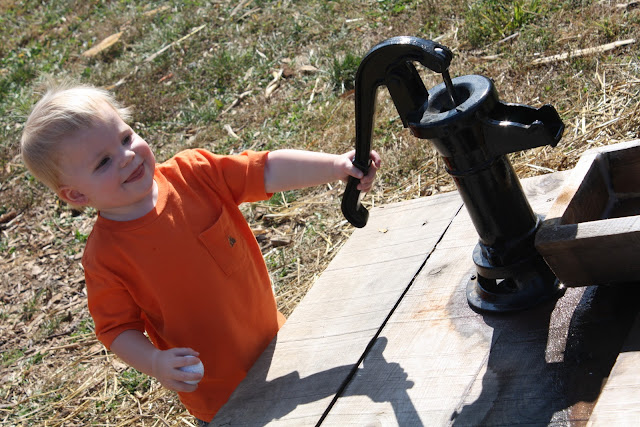 We paused for photo ops, but we had to snap quick.  The boys wouldn't sit still for a second. They could see all the fun buzzing around them & they wanted to be right in the mix of it. 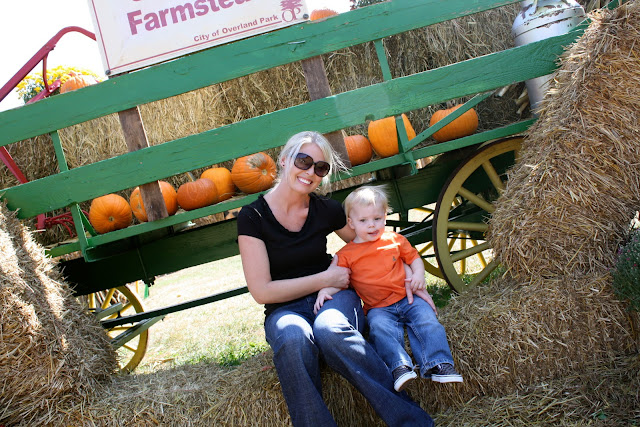 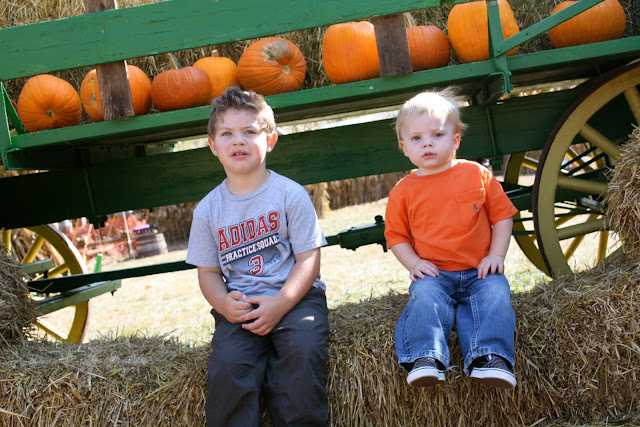 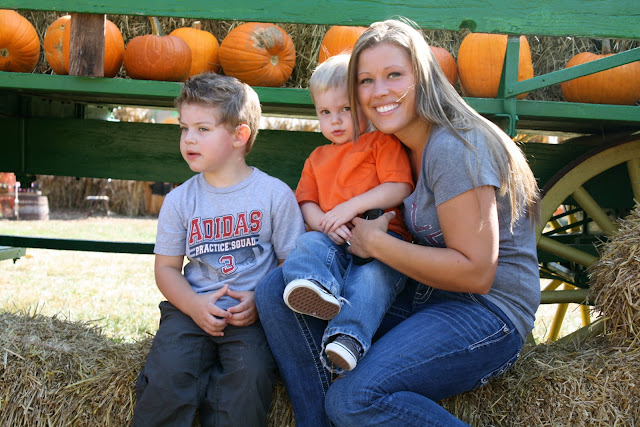 Next, it was time to do a little fishin', so we found a quiet little fishing hole that the boys could sink their lines into!  Jude got the hang of the fishing adventure real quick, while Jett proceeded to whip that pole around like a crazy person & scare me & everyone in his presence to death {I think he's going to be more of a fly fisherman type guy}. 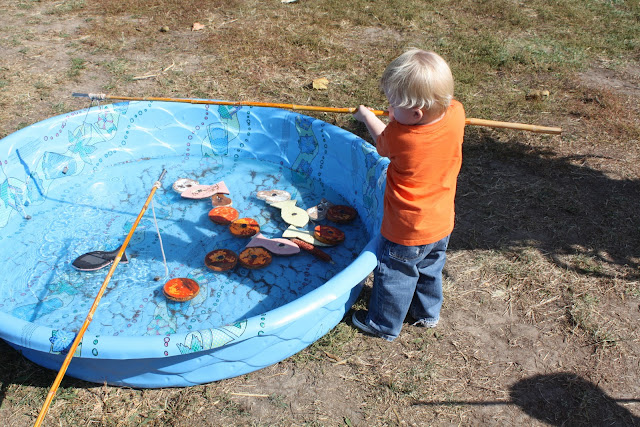 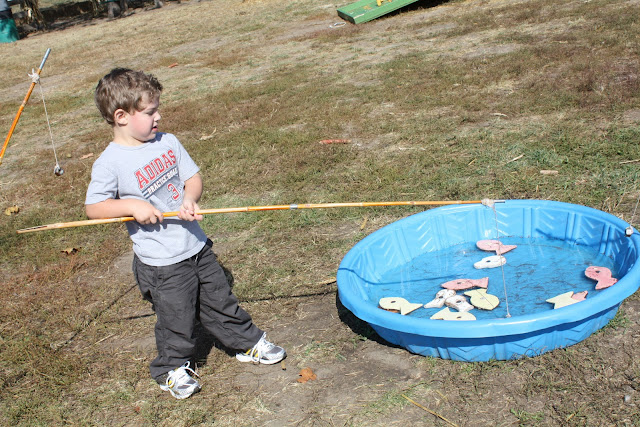 It was almost time to leave Pumpkin Hollow to go & explore the rest of the farm, but we couldn't exit Pumpkin Hollow without a pumpkin.  The boys were so funny in the pumpkin patch. They raced from pumpkin to pumpkin, choosing this one...no that one!  They traded in their pumpkins about a gazillion times, & for the life of them could not decide on just one. But alas, here they both came, grunting from the weight they were holding, as they emerged from that pumpkin patch carrying perfectly picked pumpkins.  They were so proud. 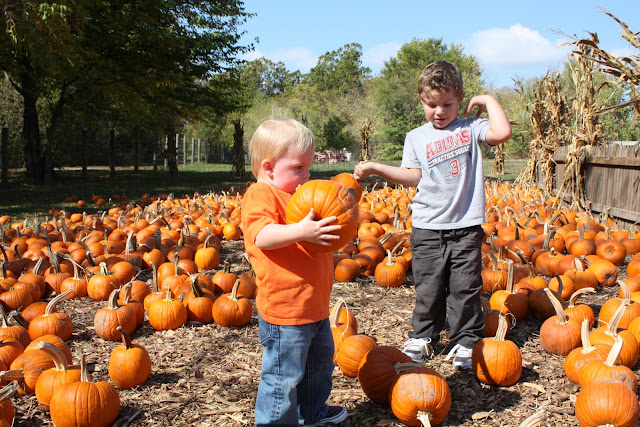 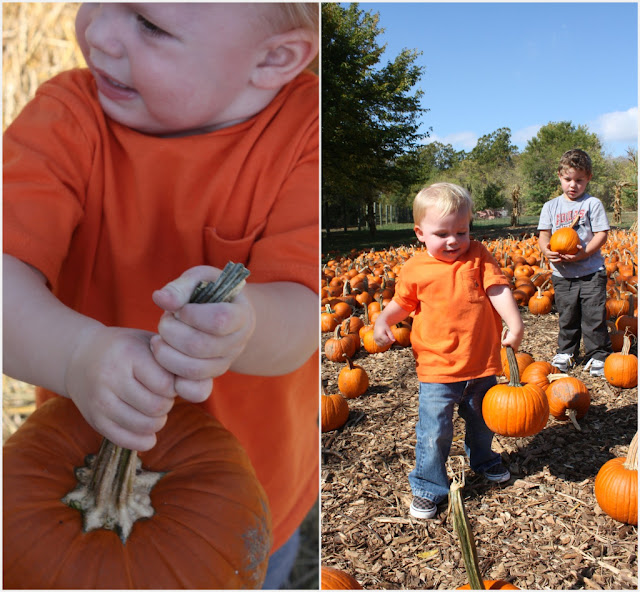 Once we hopped back on our horse drawn hayride to ride out of Pumpkin Hollow & back into the main area of Deanna Rose, we checked out the rest of the place--a few farm animals {I could barely stand the smell of them, let alone take any photos} & the active playground area, where we chased after our kids as they found forts to climb in & slides to zoom down.  Our kiddos were starting to grow tired {or maybe it was us Momma's--yeah, I'm pretty sure that was it}, so we topped off our trip with some ice cream & called it a day. A really great day, at that. 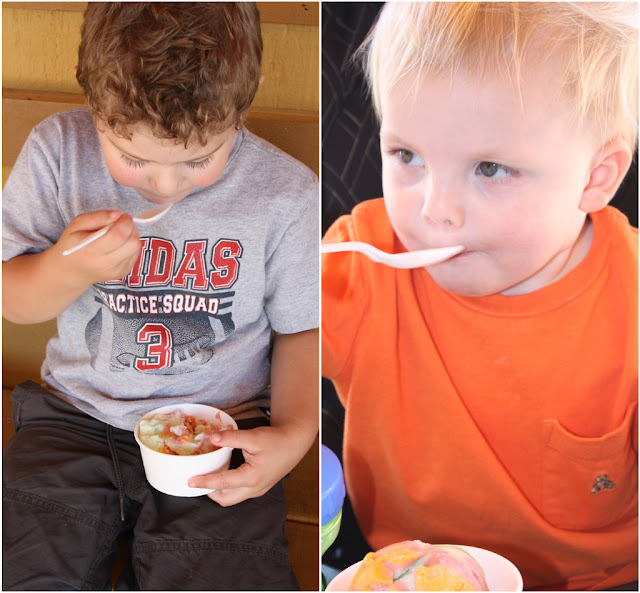 It felt good to drag our hermit selves out of the house for a change, it was amazing to get some vitamin D in our systems, & it was fabulous to spend the whole afternoon with friends who knew just what we needed!
Now that's what I call some good old fun on the farm!
Posted by happeningsofourhome at 8:26 PM