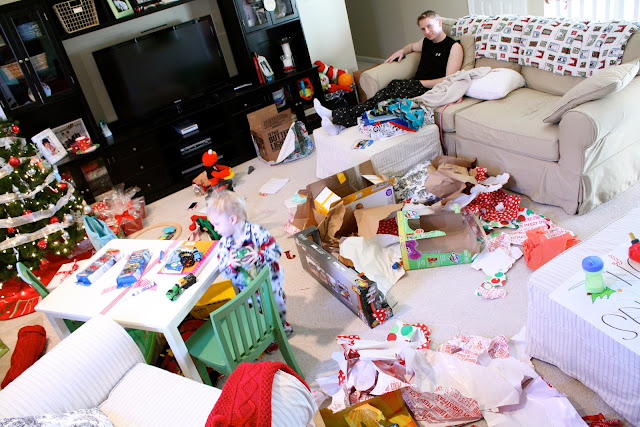 The aftermath
From Christmas Eve clear on through Monday evening which held our third & final celebration, this Christmas was hands down the Christmas of all Christmases. I sit here desperately wishing I could bottle up all the wonderment & take a big swig of it whenever I'm thirsty for a little Christmas cheer. It would be the sure remedy to a rough day, a straight shot to cloud nine & a dash of pep in my step, no doubt.

While I may not be able to bottle up each drop of joy the entire season brought to our hearts, you can bet I will most definitely be replaying & reliving each spectacular moment for oh say, the next 362 days or so.

Christmas Eve:
There's something about the Eve of Christmas that makes my heart go boom boom boom. It's the night that holds the magic. It's the evening where traditions, both old & new are carried out & it's where giddy excitement reigns free. It's where imagination flows & twinkling eyes sparkle. It's precisely the reason this momma insists her family be under our own roof every year on this particular night. I can't stand the thought of missing a single moment. Christmas Eve has always been my favorite night of the Christmas season--ever since I was a little girl. And this year was no different.

We spent Christmas Eve day at home, just the three of us, tying up loose ribbons on the great big, beautiful package called Christmas, that would soon be unwrapped. We cooked, prepped, tidied & spruced. 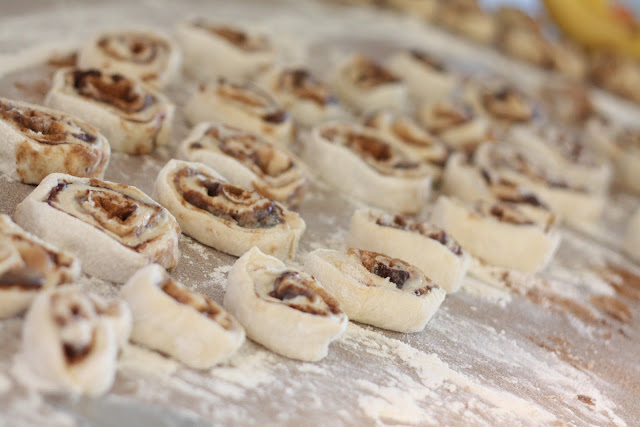 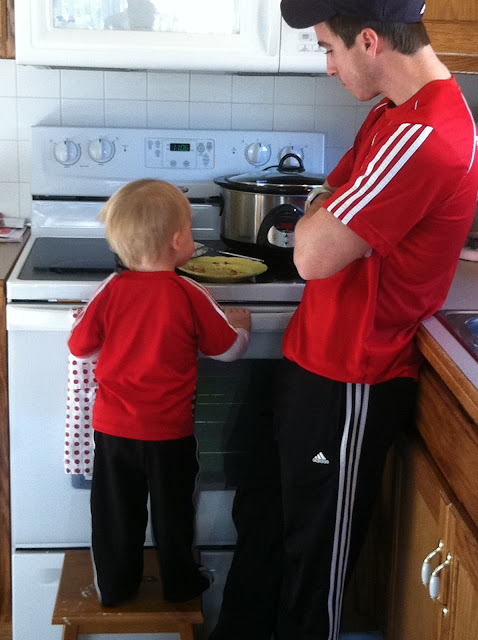 Official "taste testers"
Our home began filling up with love & energy as family trickled in throughout the afternoon & evening hours. And don't think for a second that Papa & Grandma held off for the break of Christmas morning dawn to get spoiling started. No siree--no sooner had they carried that mountain of packages inside the door before Meatball was tearing into his stocking & his "Christmas Eve gift" {As kids, my brother & I were allowed to open one gift on Christmas Eve. My mom thought it only right that she carry this tradition on with Jett.} 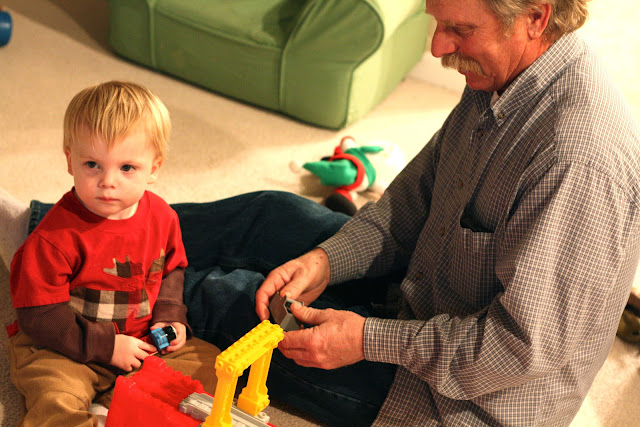 Papa's boy. He asks for his "Papa" about fifty times a day. 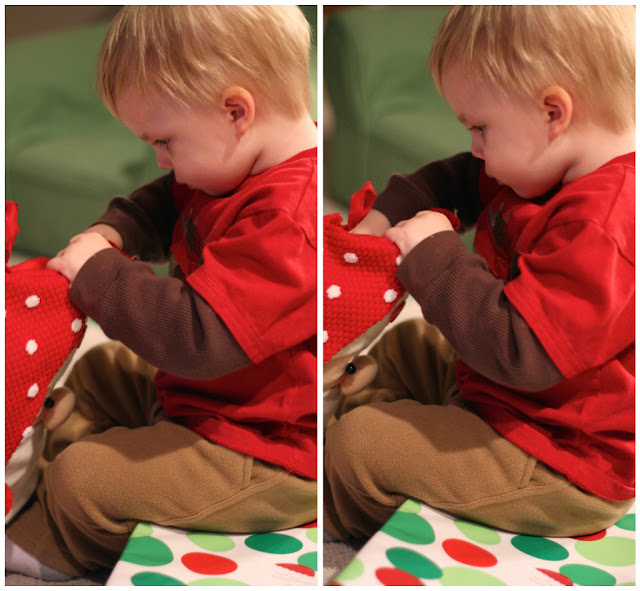 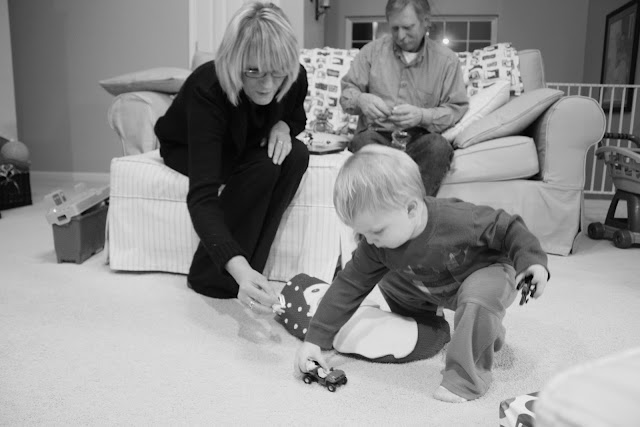 Once evening settled in, we carried out our timeless Christmas Eve traditions. 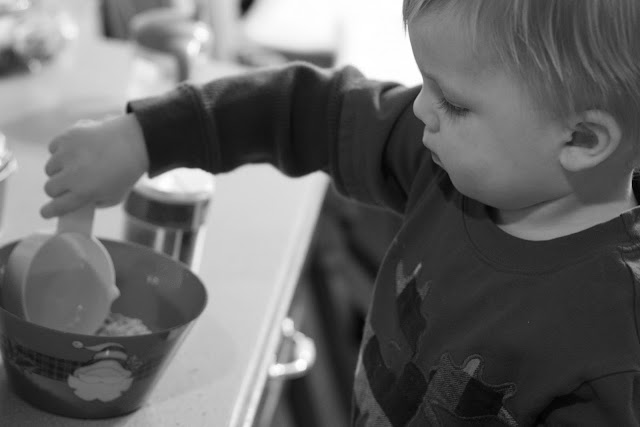 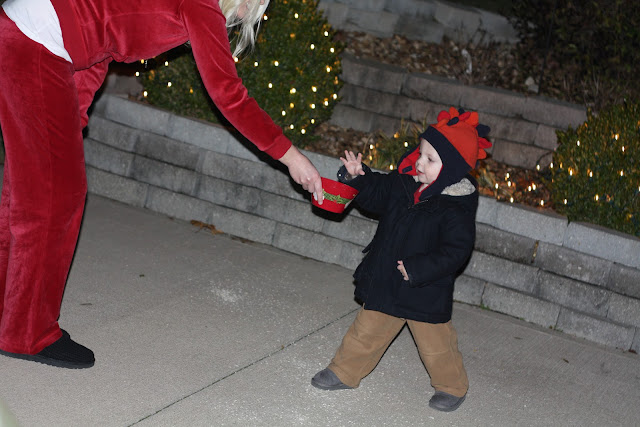 He loved scattering the reindeer food on the driveway! 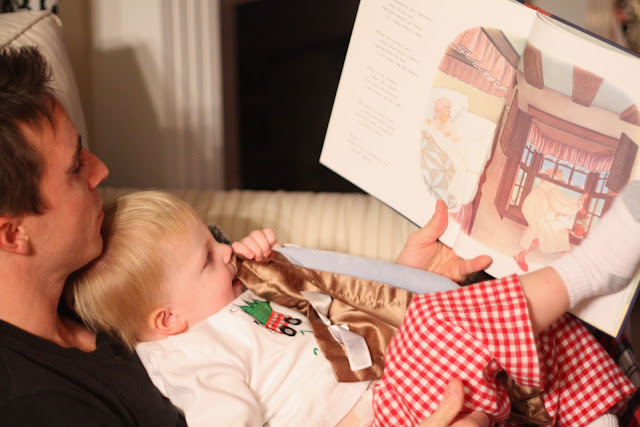 Twas the night before Christmas... 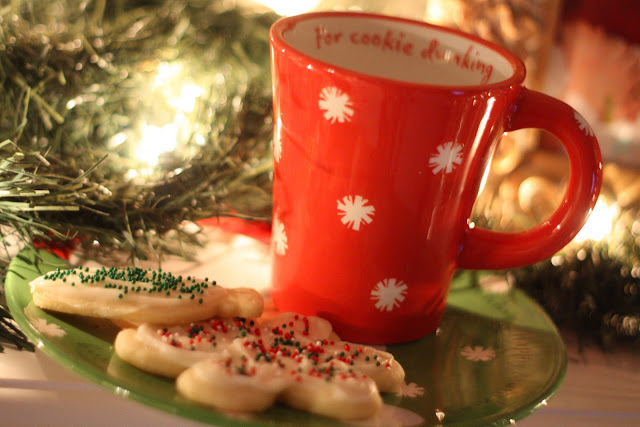 Tasty treats for Santa
After Meatball was all tucked into bed & everyone else had mosied off to bed themselves, Jared & I stayed up a bit longer...just breathing in the wonder of Christmas Eve. We felt the joy it is to be parents & the honor it is to bring these magical Christmas moments to life for our little boy. We counted the blessing it is to have loved ones who travel to stay in our home, under our roof & all the love & energy they bring along with them. And then we too, slipped into our sheets, anxiously awaiting the morning, when all our tedious work would pay off. 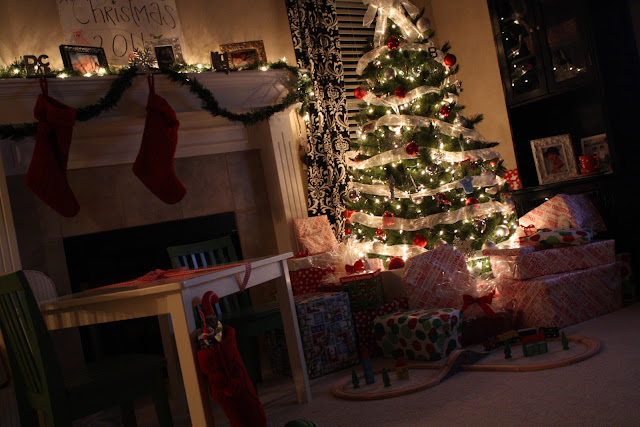 Christmas Morning:
This year, Christmas morning brought its A game . I've got to admit, it gave Christmas Eve a pretty good run for its money. Who knows, Christmas morning may have just slid into first place, becoming my new favorite. {I'm not making any rash decisions just yet, though.} Meatball's little voice over the monitor signaled that it was GO TIME & everyone corralled into the living room to get the Christmas show on the road. 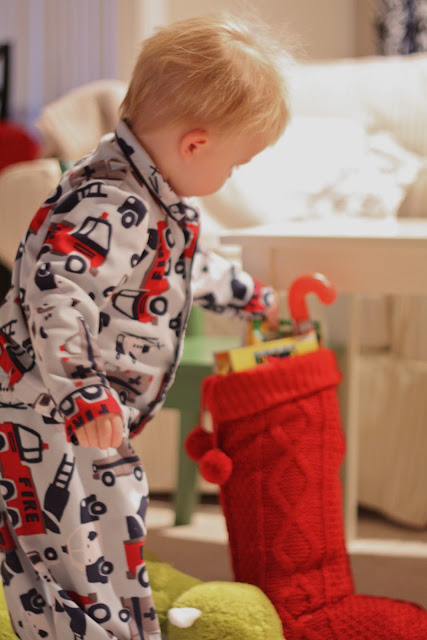 Notice he's not wearing his adorable custom jammies. He peed out his diaper & soaked them during the night. Go figure. 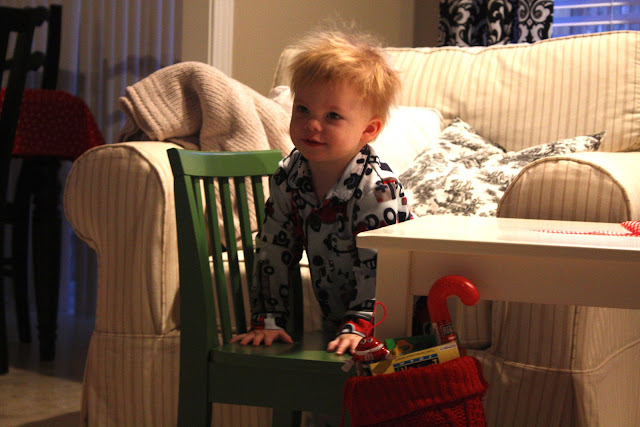 It took him a few minutes to figure out what was going on, but once he opened a few gifts & realized there were new toys inside, he quickly got the hang of things. 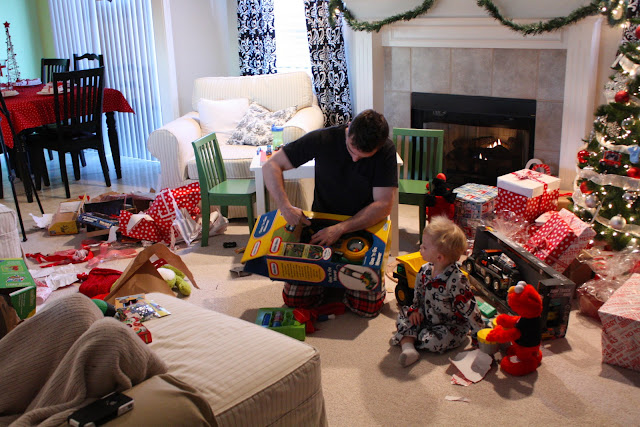 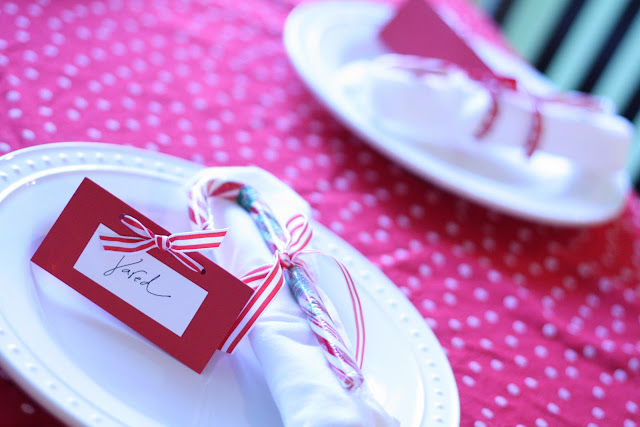 My Christmas morning breakfast casserole tasted like vomit & had to be thrown out but my cinnamon rolls saved the day!  Thank you Pioneer Woman. You never let me down! 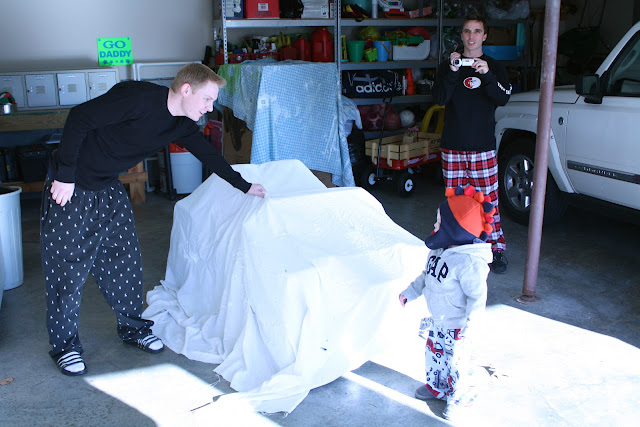 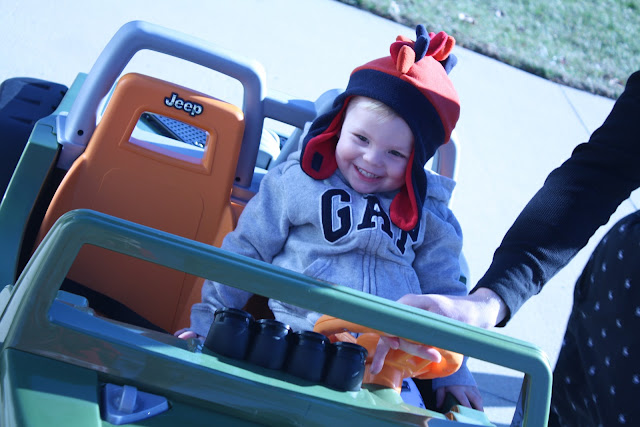 That smile says it all! 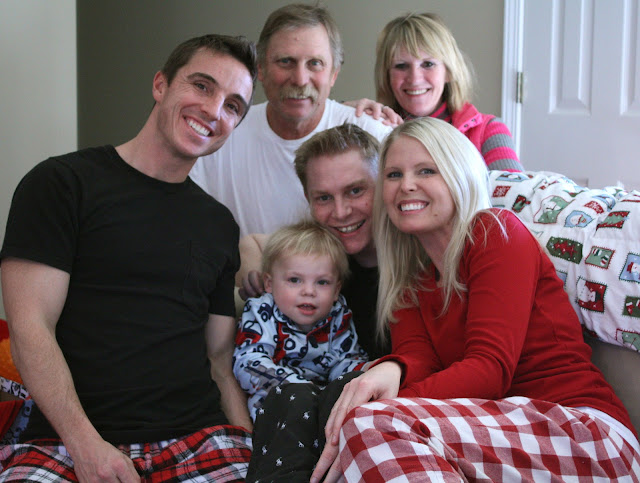 The Icing On The Christmas Morning Cake:
As if Christmas morning wasn't already all that I could dream of & more, we go & top it off by finding out a little girl will be making her way into our arms in just a matter of months. Talk about exciting! {Many of you have asked how we pulled the announcement off, who wrapped the gift, how all the details were woven together. Don't worry, I won't leave you hangin'. I'm going to fill you in on everything. That post is coming soon.} 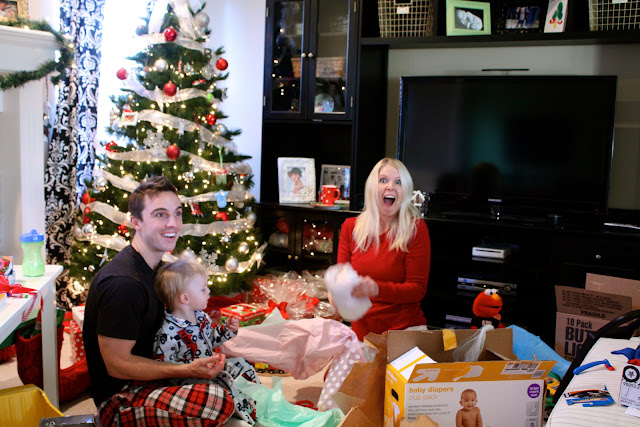 Clearly, I was shocked!
The Gift That Keeps On Giving:
The thing I love about having so much family is that Christmas continues to go on for days for us. It doesn't end once the shredded wrapping paper & ribbon gets tossed in the trash at 10:00 Christmas morning. No, it lingers just a little while longer. And what could be better than a little more Christmas, right?

We celebrated with Jared's family on Monday & like every other get together with this bunch, the excitement was crankin'! 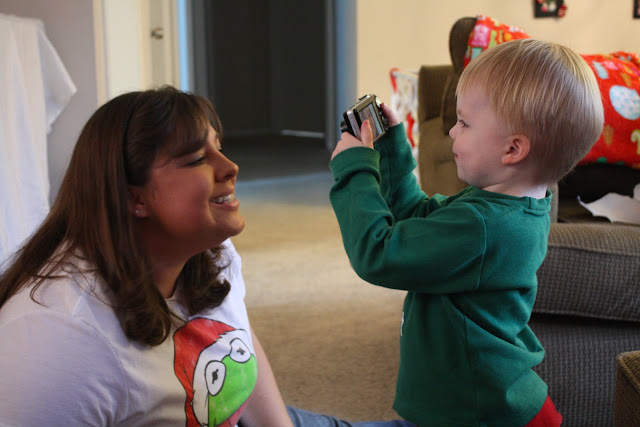 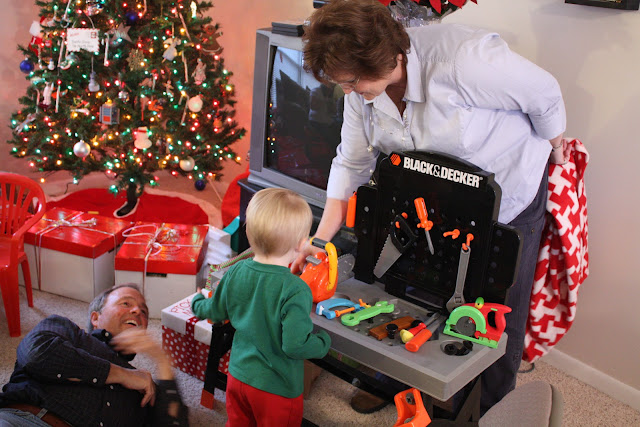 Workbench from Coach & Gigi. He hasn't stopped playing with it since we brought it home. 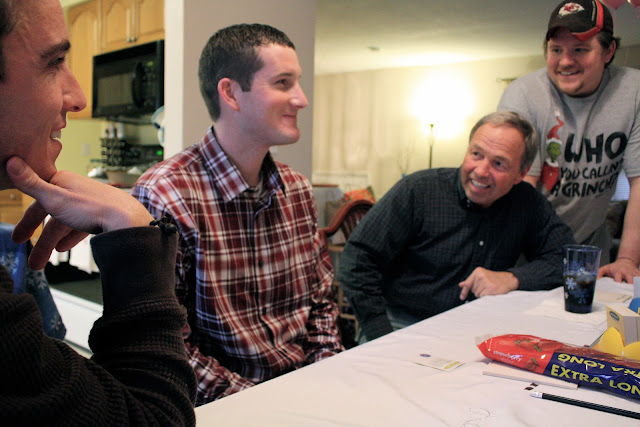 A little game of Cranium--guys against girls. {The girls whooped some boo-tay, just for the record.} 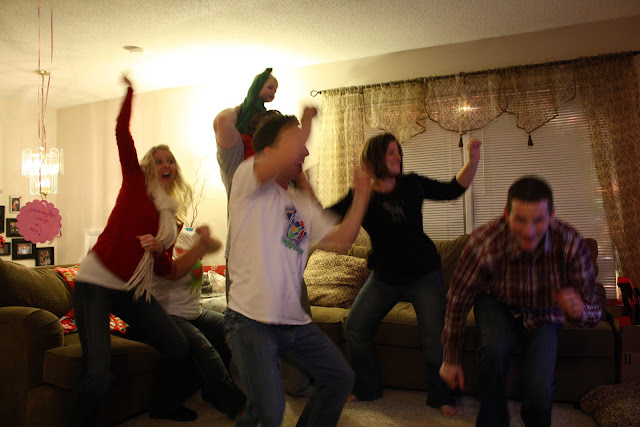 Bustin' some moves to Kinects Dance Central {check out Jett waving that arm!} 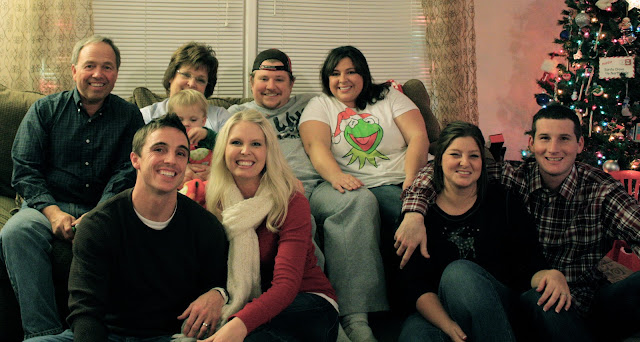 For so many reasons, Christmas 2011 is a Christmas I won't ever forget. It's a tall order, trying to pull off the best Christmas ever.

But we did it.

By golly, we did it.

Posted by happeningsofourhome at 10:21 AM