Right here, right now, I'm going to do what I said I'd never ever do.

I'm going to be one of those moms.

One of those moms that proclaims her kid is the best, smartest, strongest, bravest, most well adapted, cutest kid to ever walk the face of the earth. One of those moms that send my eyes rolling around in their sockets when they get up on their high horse & start babbling on & on about how incredible their child is in comparison to all the others.

I ask for your forgiveness in advance.

Myyyyy kid is hands down, the smartest, bravest, most well adapted, secure with his surroundings, {& let's not forget cutest while I'm getting after it} child that I have ever known. Seriously, he is.

Meatball moved to his big boy bed this week. 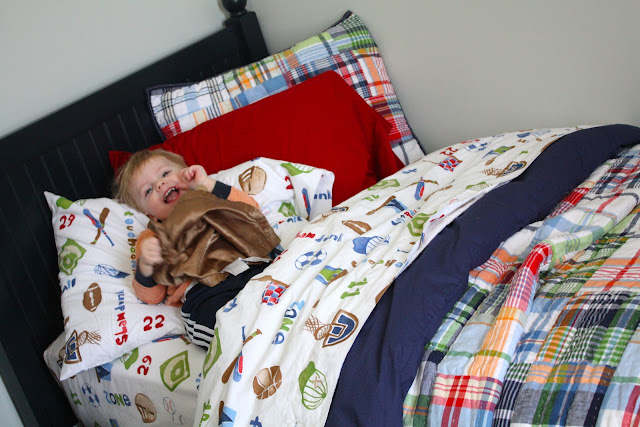 I was so nervous about this transition. He has always been the best little sleeper in his crib & of course I was terrified of the thought of going & screwing that up. I fretted, I stewed, I worried & I put it off for as long as I possibly could. But then, once I'd put all of the adorable new bedding on his bed & saw the wellspring of excitement that bubbled up inside my little boy, when I saw the way he jumped up into those soft sheets & snuggled in as tight as he could with his monkey blankey next to his face & that thumb plopped in his mouth, when I saw him point to the blankets, pillows & guard rail exclaiming with such pride, "Jett's!", I knew that the time had come. I knew our window of opportunity was before us. I knew I had to trust & follow my little boy's lead. I knew I had to fight the urge inside myself to strip those sheets off that bed & tuck them away until a later date down the road--a later date when I would be more ready. I knew it was time to move Meatball from his crib to his new big boy bed. 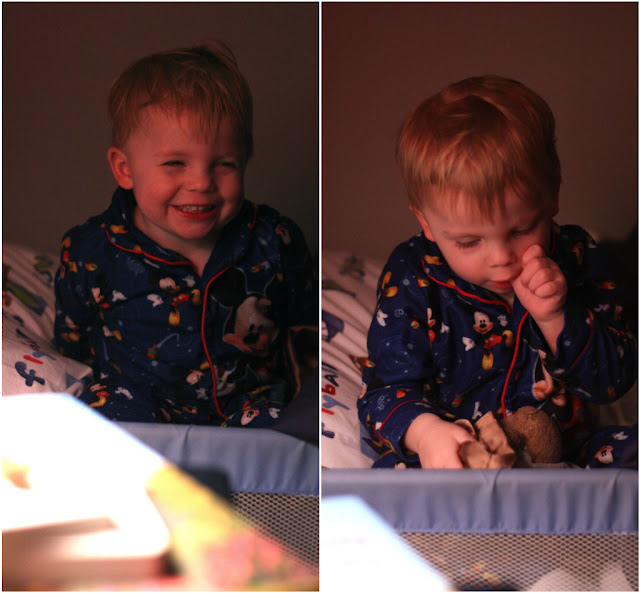 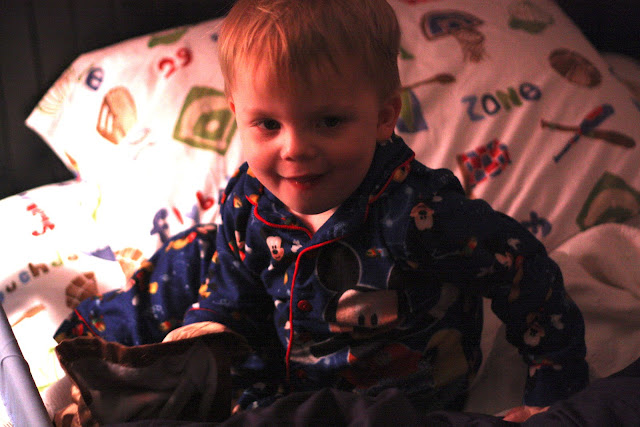 I honestly am still amazed at how easy this transition has been for Jett. The first night {Tuesday}, we gave Jett his bath as usual, but after his bath instead of taking him to the nursery like normal, we took him to his big boy room & diapered, lotioned, & jammied him up in there. When we went to take him with us to get his sippy cup of milk & let him watch a few minutes of Nick Jr. in the living room {our usual routine}, he climbed into his big boy bed & insisted that he stay there. He wasn't budging & we couldn't convince him to get out. So instead of sticking to our old familiar, we once again followed our little boy's lead. I grabbed a stack of books, climbed into his bed with him {I love that I can climb in & snuggle him now} & we came up with a new & improved routine. We read our books, we talked about what a big boy he was & how proud we were that he was going to sleep in his big boy bed & then we kissed him night-night, turned on the monitor & nightlight & softly stepped out of his room. 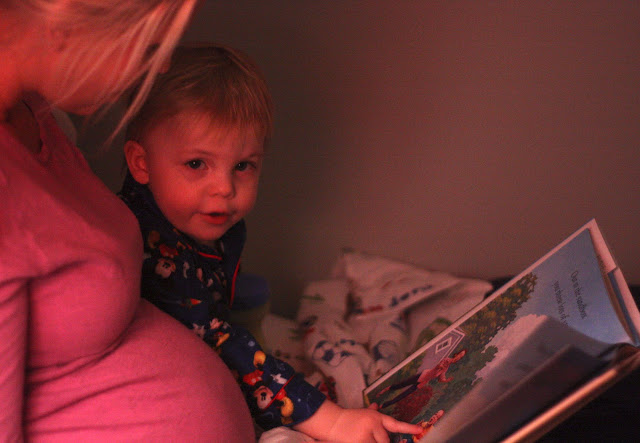 The moment Jared & I were no longer in his sight, we heard his little voice, "Momma...Momma..." I turned around & rushed right back in, snuggled & kissed him good-night, told him I would be there if he needed anything at all & walked away once again. A few seconds passed when we heard, "Dadda...Dadda..." Jared rushed in, gave him the same drill & that was all we heard out of him for the rest of the night. Not another peep. Talk about a little trooper. 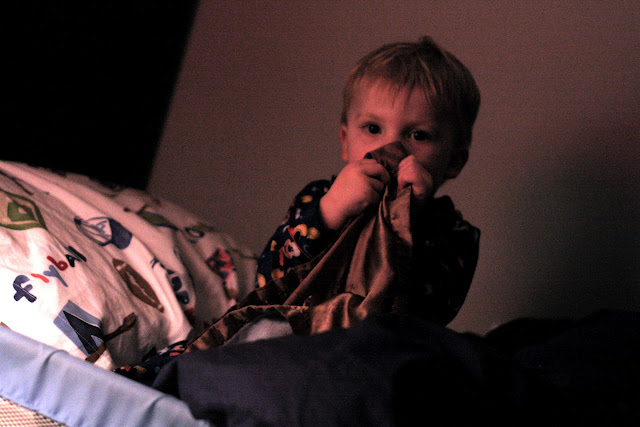 The next morning I woke up to the sweetest, happiest, most chipper little voice over the monitor & I walked in to find my little Meatball sitting up in his bed with the biggest grin smeared across his face. He was so proud of himself & as for me? Well, let's just say if I would have been any more elated, my big pregnant butt would have gone & done cartwheels all over the room. 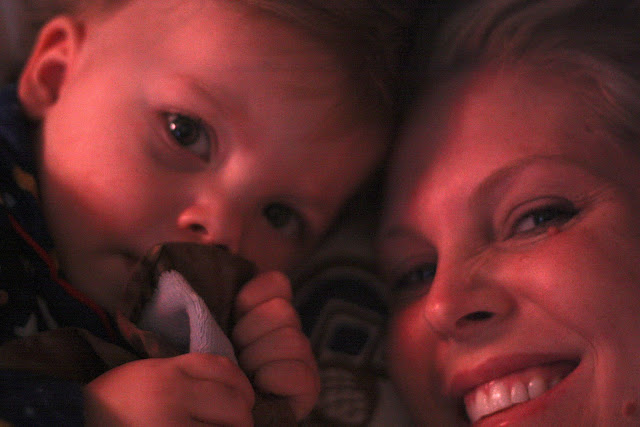 I do have to take a moment & admit that I have struggled deeply with this transition. {Shocker, right?} In fact, Tuesday night when Jett was taking his bath & just hours after Jared & I had made the final decision that this was the night, I'll admit that I cried my heart out. I had walked past the nursery, glanced in & saw that little rumpled ball of blankets in the crib & realized that I never had time to prepare for this moment in the way that I like to prepare for things. I didn't know that just the night before when I had tiptoed into his nursery to check on him before I turned in for the night that it would be the last time I would see my firstborn baby peacefully sleeping in that crib. I would have stood for longer. I would have looked long & hard at the room & reminisced on all those 4 am wake up calls where just the two of us sat & rock-a-byed those wee morning hours away. I would have studied his little features, memorized the ones that still whisper baby & I would have tucked them away safely in my memory so I could always go back & remember.

Even long after tucking him in his big boy bed that very first night, long after he had drifted off to dreamland, I sat out in the living room & battled with myself wondering if I'd made the right decision. I sat wondering if he was too little to be in that great big room in that great big bed, I sat wondering if I was forcing him to grow up much faster than he should be. I sat there beating myself up. I checked on him too many times to count that night & I anticipated a cry out in the night, but as it turns out, the lesson here to be learned was that I need to have a little more faith in my little boy--I need to have a little more faith in myself as a momma. 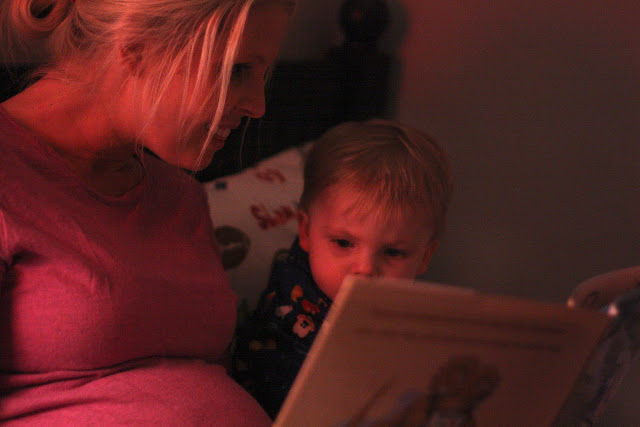 We're on night three of the big boy bed transition at our house & I still stand amazed at how easy & smooth this whole process has been. What a complete blessing! 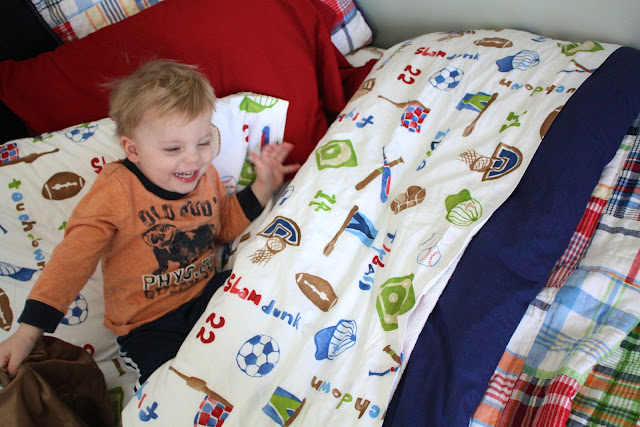 Alright, alright...I'm done being one of those moms {for now anyways}.


A very special thanks to all of my loved ones who gave such great suggestions for this transition in our lives. They were so very helpful & it meant the world to me to have a support system of veterans who have been there, done that. I appreciate each & every one of you!

Posted by happeningsofourhome at 8:17 PM