Kansas City knows how to do St. Patrick's Day. 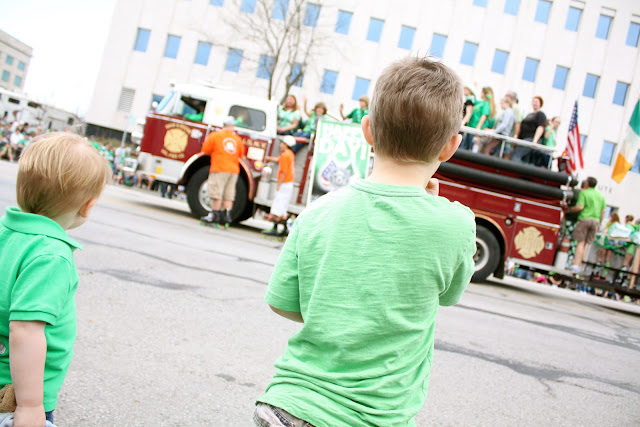 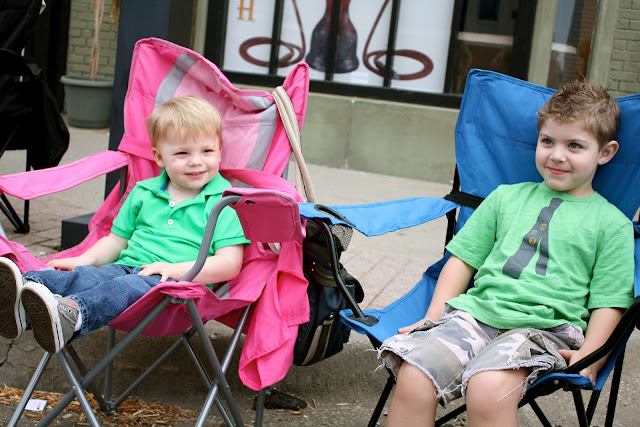 In fact, if you live in this city & haven't heard of the big, famous St. Patty's Day parade that rolls around every year on the the 17th day of March, well then, I'm afraid there's a good chance you may be living under a rock. 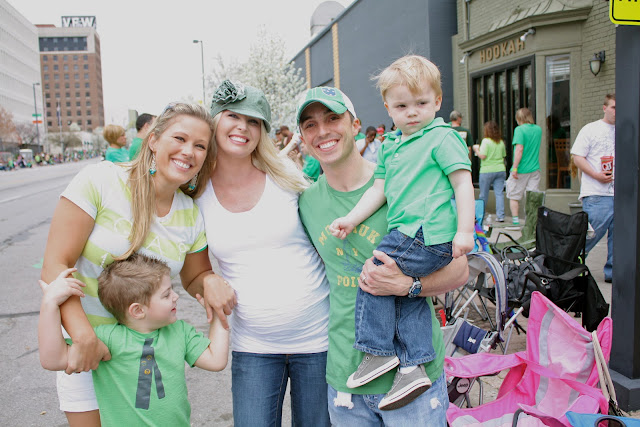 But I had yet to experience it all for myself. 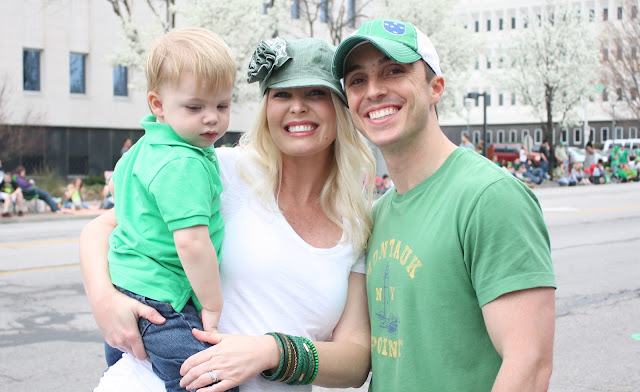 So this year, I decided it was high time to try my own bit of luck & scope out this shindig for myself. 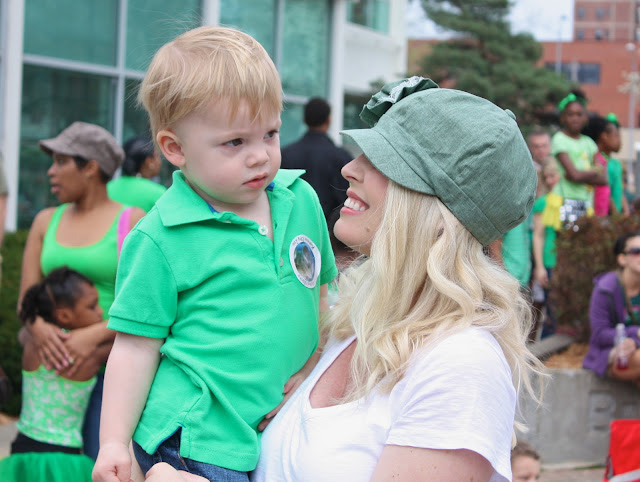 Sure enough, Kansas City knows how to do St. Patrick's Day, alright. 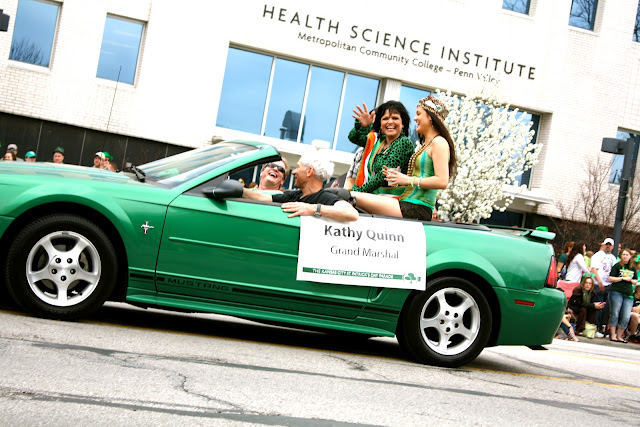 My girl {& Grand Marshal}, Kathy Quinn. Wouldn't you know it, she's rock'n GREEN animal print. Love her! Oh & yes, she is most definitely looking straight at me & posing for my camera {It wouldn't be because I was literally screaming her name at the top of my lungs like a crazy fool. No, that surely wasn't it.}

It was a perfect day for a parade & as we zig zagged through the sea of kelly green on a mission to find a seat with a view, I felt my excitement bubbling. 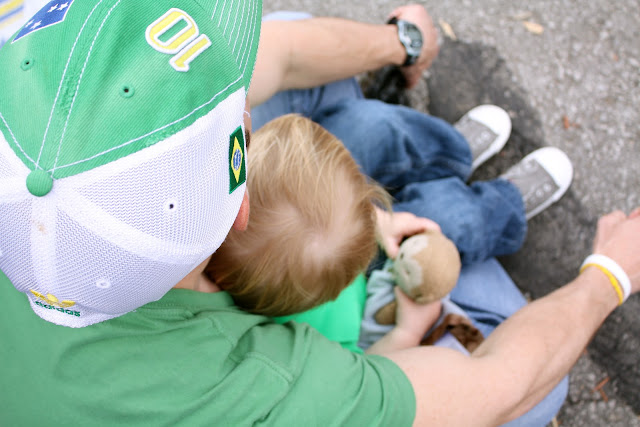 In the distance, the hum of motorcycles buzzed, the klippity klop of horse feet echoed & the blue & red lights of police cars flashed . We settled into our seats, said hello to our fellow Kansas Citian neighbors on each side of us & waited for the show to get on the road. 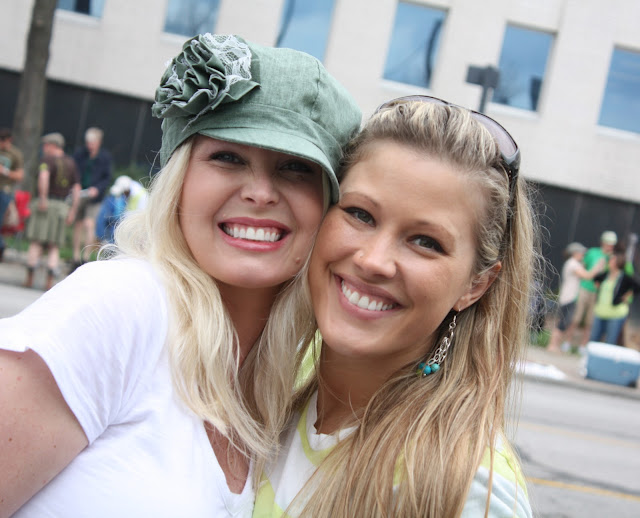 As soon as the parade came booming down the street, our boys were locked in. There were firetrucks & marching bands, leprechauns & men in kilts. For more than two solid hours, we were entertained by the steady beat of bass drums, pretty ponies that got jiggy with it {I'm not even kidding--these horses had moves I've NEVER seen before} & of course, my personal favorite, the Fox 4 News team that waved from their green mustang convertibles. 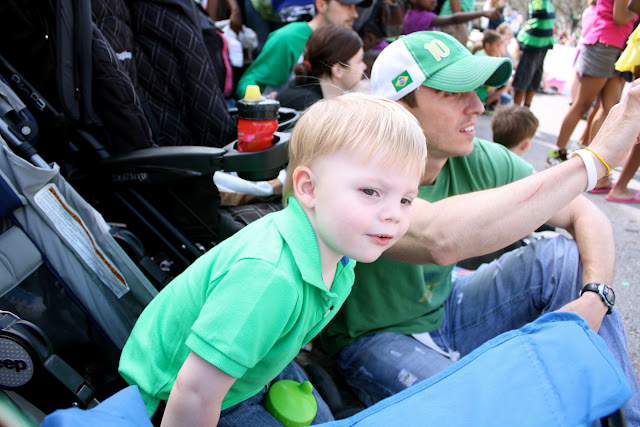 As the parade began winding down & we were packing up our things to head out, I took one last look around me & noted something. 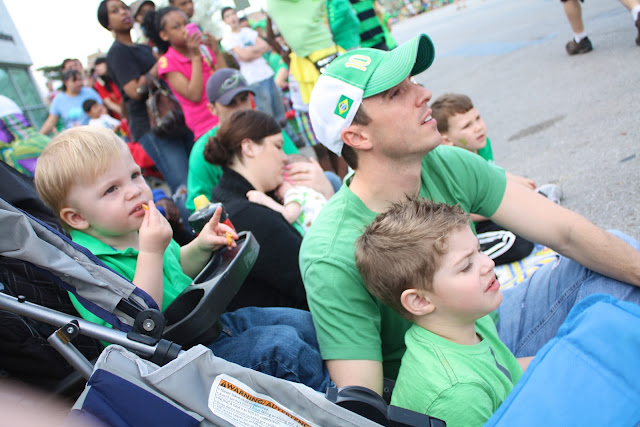 The Kansas City St. Patty's Day parade was nice. It was entertaining. There was plenty to hold our attention. But at the end of the day, it was just another parade--nothing different or spectacular in comparison to any other parade I've ever been to in my life.

Except for one element--one element that sets it apart from all the others--that puts the Kansas City St. Patty's Day parade on the map.

The spectators. The fellow Kansas City residents. The hundreds of thousands you'll find packed shoulder to shoulder along the sides of those midtown streets. It's the normals & crazies alike, that come out with their enthusiasm & spirit to make St. Patrick's Day in Kansas City one heck of a festival.

And one heck of a festival it was. 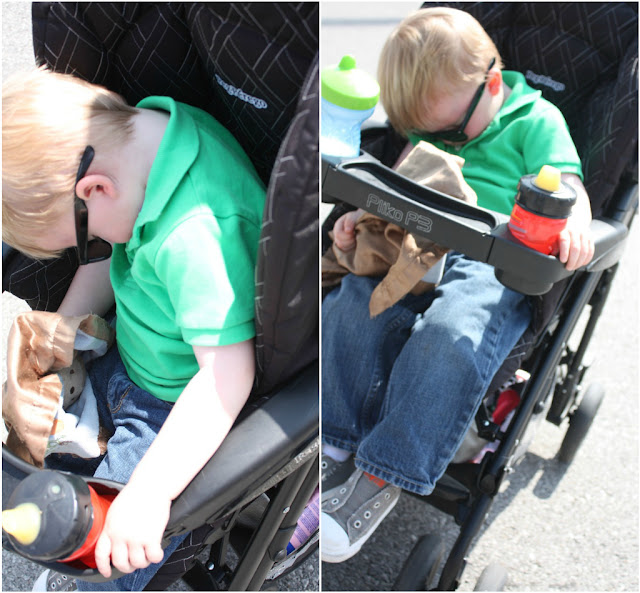 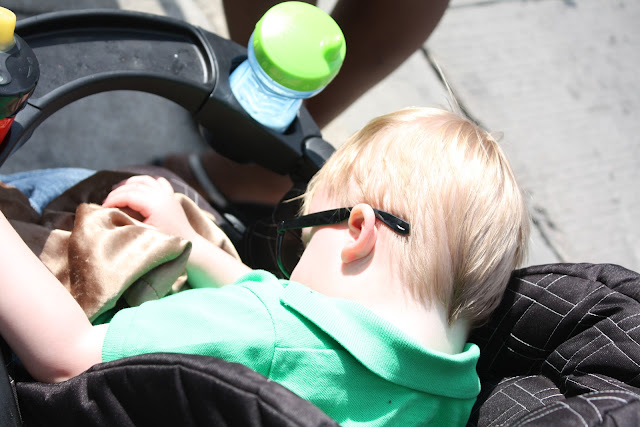 Not even a five minute walk back to our car & Meatball was konked out.

We concluded our St. Patrick's Day with an evening spent relaxing on our friends' front drive. Stacy & I caught up on all that life had been dishing up while our carefree boys raced strollers up & down the sidewalk & took turns tracing one another with sidewalk chalk. 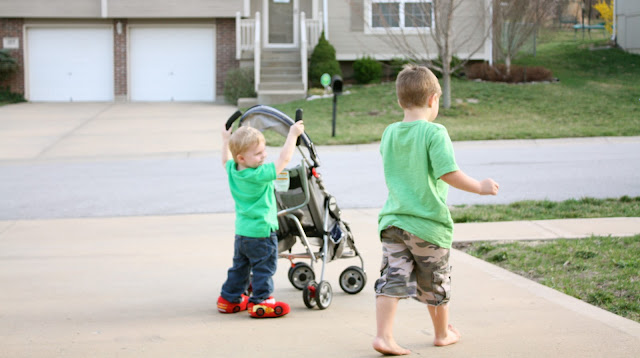 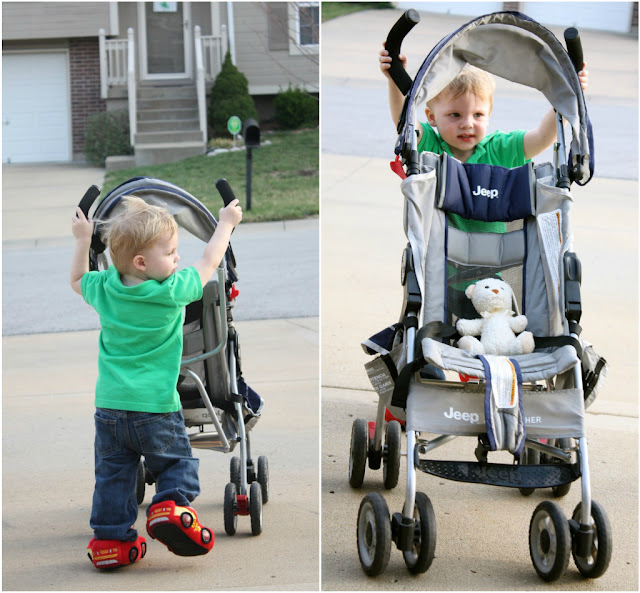 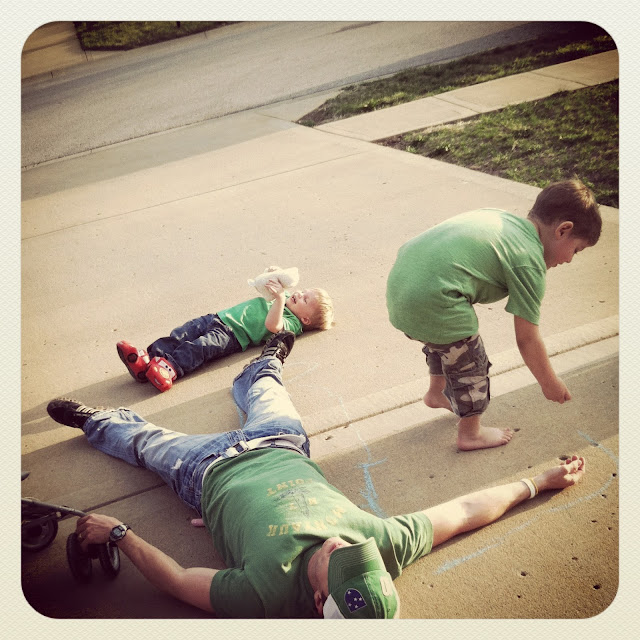 Jett laid eyes on these house slippers that Jude had outgrown & refused to take them off. We love our hand-me-downs!

Oh, & to wrap the day up, we showed our kids what's up with a fierce challenge of old school Hopscotch. 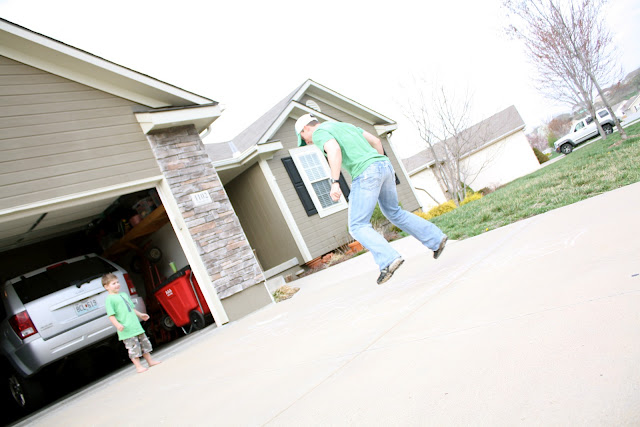 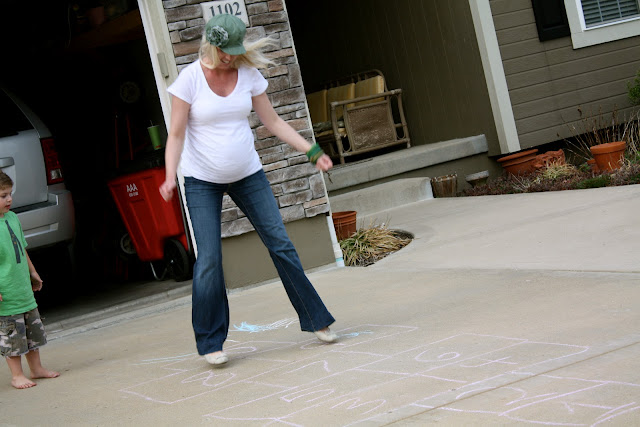 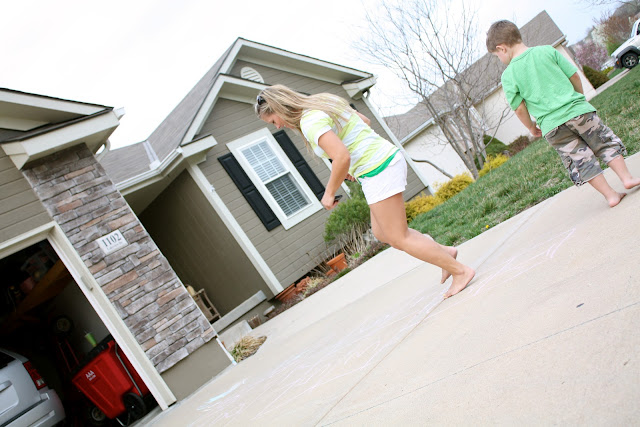 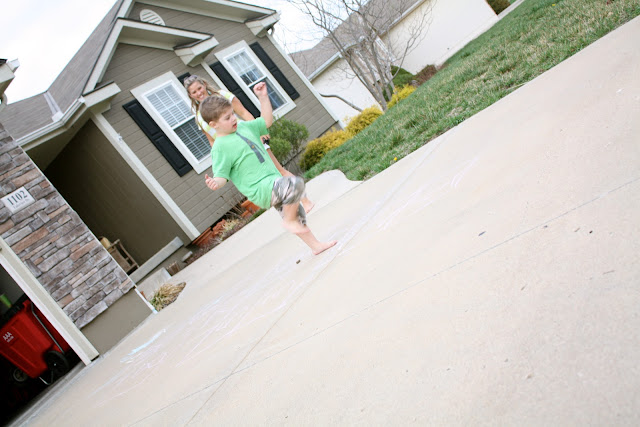 It was a happy St. Patrick's Day for sure & whether I've got a speck of Irish running through my veins or not, I was Irish for a day. 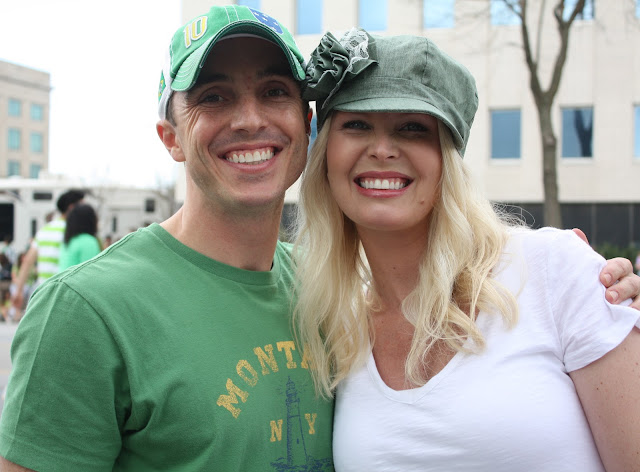 And these Irish eyes were smiling from ear to ear!

Posted by happeningsofourhome at 9:11 AM