It was a really happy Halloween. 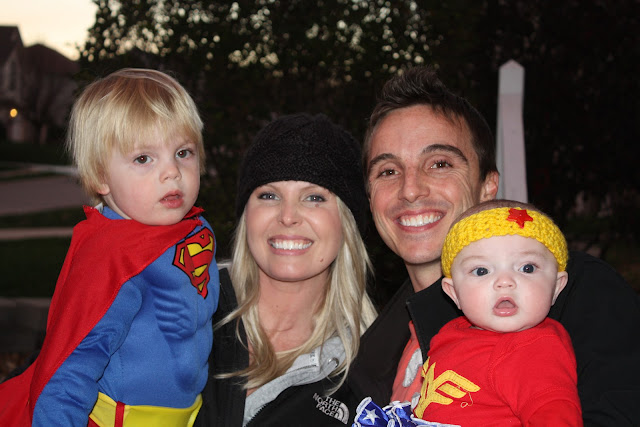 By five o' clock, Superman & Wonderwoman were all dressed up in their costumes & ready to join forces in trick-or-treating. 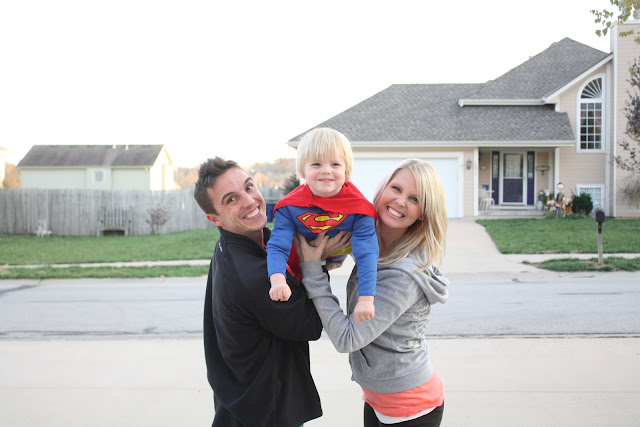 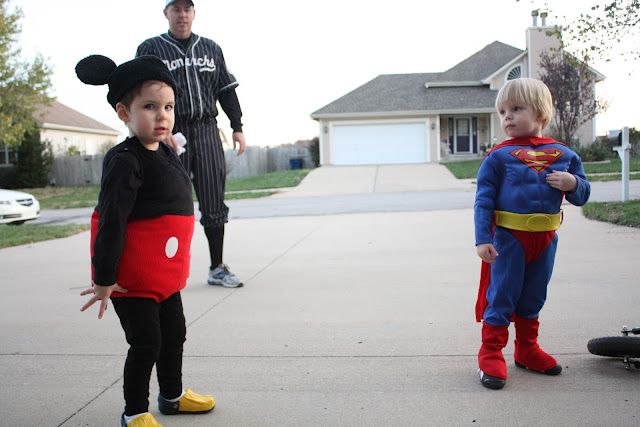 Papa, Grandma & Uncle Curtis joined in the festivities, making the evening an extra special one. As we weaved through ghosts & goblins, witches & werewolves, we reminisced of old times & our very own adventures in trick-or-treating we had as kids. 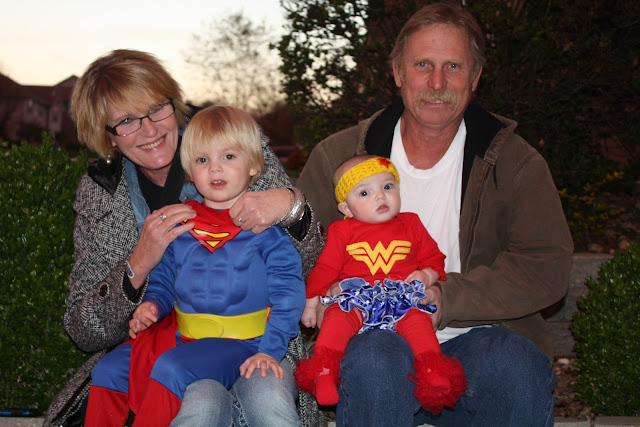 Everyone took a turn taking our little superheroes up to ring doorbells. We skipped the spooky houses--my boy was a little nervous this year about scary costumes, fog machines & shrills & screams. If a costume whisked by him that didn't happen to be Woody from Toy Story or a princess in a tutu, it was immediately labeled "Scary Guy".

So instead, Jett would march himself up to the friendly houses--the ones with jack-o-lanterns glowing on the steps & lawns that didn't resemble a graveyard. He'd utter just above a whisper, "Trick or treat" while Lulla stood on stand-by, simply looking adorable. You can't imagine the extra loot Superman managed to bank because of that cute little sister of his. That's superhero team effort at its finest right there. 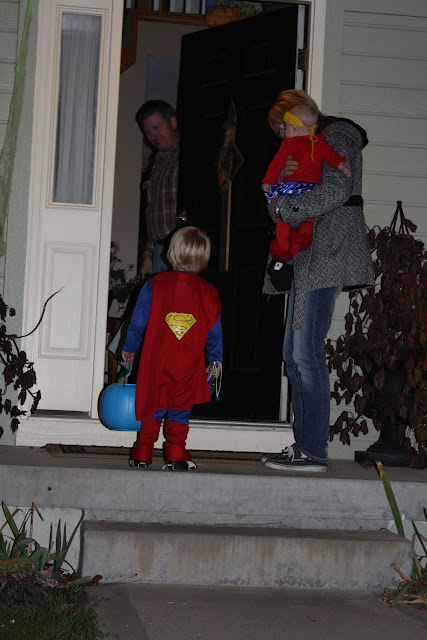 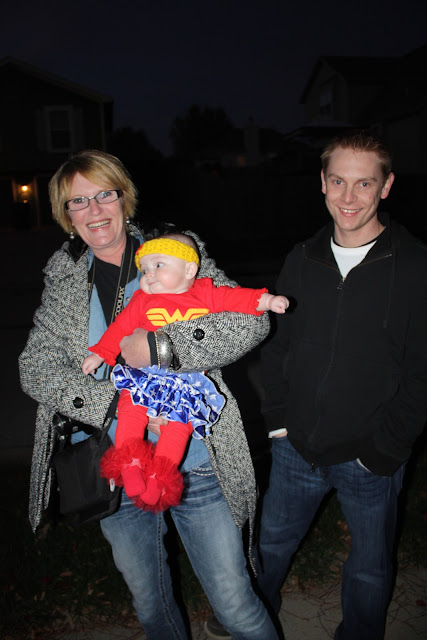 It didn't take long for Jett to realize his blue pumpkin was filling up--& quick. Just as soon as a piece of candy was dropped into it, he'd spin around & order, "Next house". 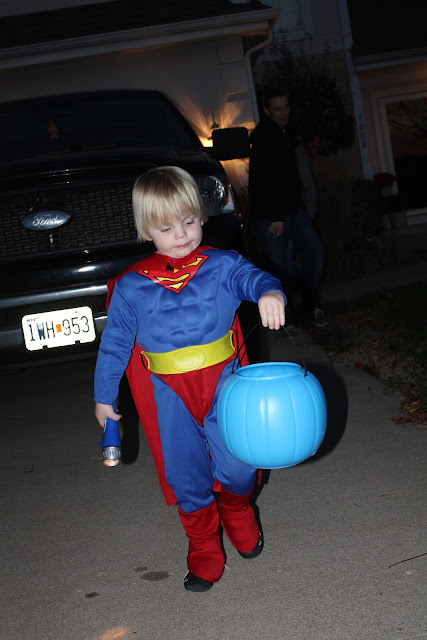 Finally that blue pumpkin was weighing him down & so was the temptation to dig into all that candy. So we called it a night & decided to take the party home to our own driveway. 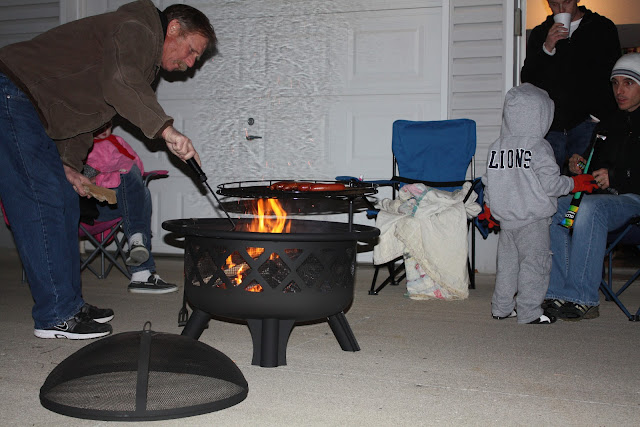 We huddled around a hot fire to warm our chilly noses & we guzzled hot cider to heat up our insides. Neighbors joined us, bringing their big cauldrons of candy along with them & together we lounged around in camping chairs, handing out candy until the trick or treaters finally trickled off. 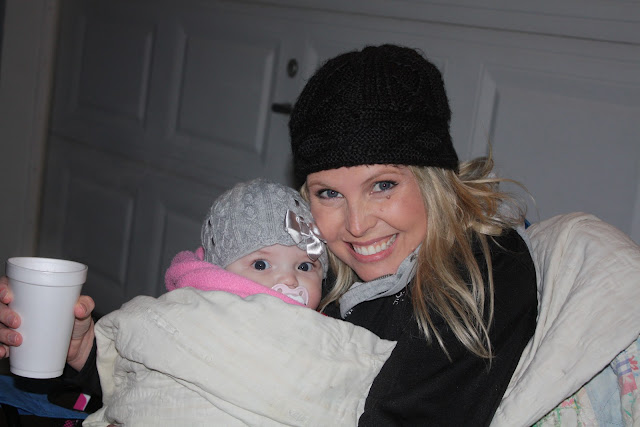 We've spent the entire month gearing up for this holiday evening. We've compacted all the Fall fun we possibly could into 31 days. We picked the pumpkins, crafted the crafts, carved the jack-o-lanterns, chose the costumes.

And then...as the sun went down on Halloween night, we watched as the big finale unfolded. 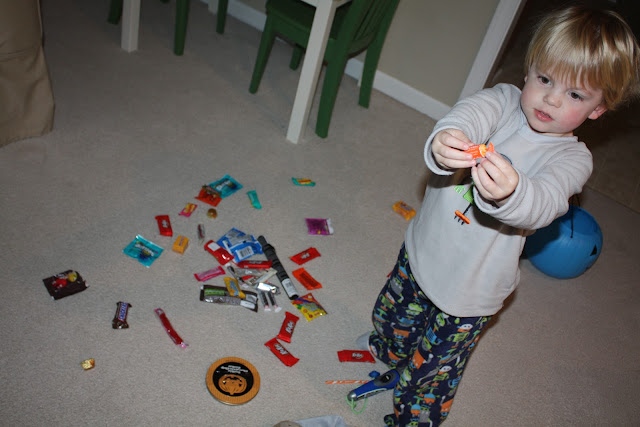 It was a really happy Halloween, indeed.
Posted by happeningsofourhome at 7:28 PM