"It hurts me more than it hurts you."

Just the other day, that old saying got put to the test here in our household. Oh boy howdy, did it ever get put to the test. And let me tell you a little something about that old saying...it's definitely still in the business of ringing true--of making a momma fight her crumbling heart between what it wants to do & what she believes is right to do.

In all honesty, I can't tell you if I did the right thing or not. I'm still pulling out lessons from that day & wondering how I could have done better as a momma.  Parenting has a real way of bringing you to your knees & humbling you. It's a circle of failing & getting up & trying again & again. I don't do parenting perfectly, not even close. I get impatient. I raise my voice. I have my days.

As soon as Jett woke up Wednesday morning, the first words I spoke to him were, "Today is the day we see Santa!" I played it up all day long-- reminding him that he'd have to speak loud & clear when he asked Santa for that special gift he's been talking about every single day--a piano. I did my best at convincing him he'd have to be strong & brave & sit on Santa's lap like a big boy so Sissy wouldn't be scared. I reminded him of how special he & Lulla are--that Santa was making a very big trip from the North Pole to come & visit them. He was excited. He couldn't wait. The day was dwindling down & the time was drawing near.

And that's when things began unravelling. Our passes to see Santa were for 6:30. And just minutes before 4:56, the day went to hell in a hand basket {4:56 is the time I tearfully sent Jared the text saying there was no need to hurry home from his company happy hour--that our trip to see Santa had been called off}.  Back up. 4:56 was the time that it all hit the fan, but really, the entire day, from early morning had just been off.  Looking back, I can see that each passing hour of that whole stinkin' day had been brewing into a combination for a perfect storm--an irritable momma, a baby who hadn't napped well & screamed relentlessly every time she was removed from Momma's hip, & a two year old insistent on making matters worse. Please, oh please, tell me you have these off days too. That I'm not the only one who's almost three year old whines through every sentence, who's six month old poops through three sets of clothing & screams the second she's put down. Where you look at the clock & back at yourself only to realize it's after three in the afternoon & you haven't even had a shower yet. Because those off days? They happen around here.

I laid Lulla down in the middle of the floor for a moment while I ran to the kitchen to shut off the beeping oven & pull dinner out when I heard Lulla's screaming hissyfit escalate to an even higher level than it had been at all day. I dashed around the corner to find toys--little planes & cars, bouncing off the top of her head. The little girl who screams bloody murder if you even look at her wrong was now getting plucked by tiny toys. You cannot even imagine the meltdown that ensued from her. And there stood my Jett man--the normally sweet, tenderloving big brother, standing across the room chucking toys at his crying sister while telling her, "You're makin' my nuwbs!" That's code for: you're getting on my nerves.}.

I should have stopped right there--taken a breath, told my own ball of winding nerves to chill for a sec. I should have stopped Jett, explained to him that I understand his sister's crying makes him absolutely crazy-- that it just so happens to "make my nuwbs" too--but that his behavior in hurting her is wrong. I should have allowed the steam that was building inside of me to fizzle out before I even took on the situation.

Instead, I saw red. I marched into the living room, steam spewing from my ears. I spanked Jett's bottom, plopped him in time-out & before I had time to even process the words, they were rattling off my tongue, "We are NOT going to see Santa tonight!" Ugh. The minute those words were out there, I immediately wanted to retrieve them, gather them back up & pretend I'd never uttered them. Here I'd spent a whole entire day preparing for our trip to Santa. I'd arranged dinner & naps & nearly killed myself squeaking in a five minute shower, all for the sake of making merry, magical memories for my children as they visited the jolly ol' fella, himself. I had watched my little boy ooze with excitement all day long & now I was watching that excitement be replaced with gigantic tears & a shattered heart as he sat sobbing in time out.

The smoke eventually cleared. My nerves settled. I apologized to Jett for yelling at him. Jett apologized for hurting his sister. I explained that it's okay for him to express himself, to tell me when he feels angry at Sissy & that if he can tell me when he is frustrated instead of taking matters into his own hands, that I will promise to do my best to help him in any way that I can--whether it be taking his attention off of the crying by engaging in something he loves, by having him help me with something "important" or just by corralling him away from his sister until his own nerves can settle. We had a good talk. Good hugs. Good reconciliation. And then he asked, with wide eyes, "I go see Santa now?"

Oh, the sting, the burn, the hurt in my heart, the tingle in my eyes from the quickly forming tears. My heart began wrestling itself a hundred times over as I looked into the eyes of my hopeful little boy-- Oh, just take him. You were wrong as a parent, too. You shouldn't have spouted that off without thinking. The punishment didn't really fit the crime. And see? He's genuinely sorry. You're all ready to go, anyways. Just take him to see Santa.

I answered him, despite the lump in my throat, "No buddy. We can't go see Santa tonight. You hurt your sister & that isn't okay."

For the next twenty-four hours, that same hurt filled my heart each time I overheard Jett say to Daddy, "We not go to see Santa, Daddy. I hurt Sissy." or to his own toys, "You sit in time-out. Two minutes. We not see Santa!" Over & over again I met face to face, the It hurts me more than it hurts you phrase.

Even after flip flopping & replaying that day over & over again inside my head, I still in this very moment cannot tell you if I did the right thing as a parent, or not. I don't know if there is a right-- or that any decision will ever feel right in the moments where my heart is being pulled & stretched & forced to make decisions I'm torn about. But I do know I took some lessons from that day. And I know my little Jett learned his own set of lessons, too. And I think maybe that's all I can do as a momma. Know that this parenting thing--it's a learning experience I won't ever do perfectly. But what I can do is commit to giving my very best & letting my not-so-very-best-moments mold me into something a little better.

At last, a new day dawned. And let me tell ya, there ain't a momma out there that was happier to see the that brand new Thursday morning sun shining through the bedroom blinds, than this girl right here. A more collected momma. No toys being bounced off heads. A renewed eagerness to see Santa.

On Thursday evening, with a pass for six o' clock to see Santa Claus...we did just that. 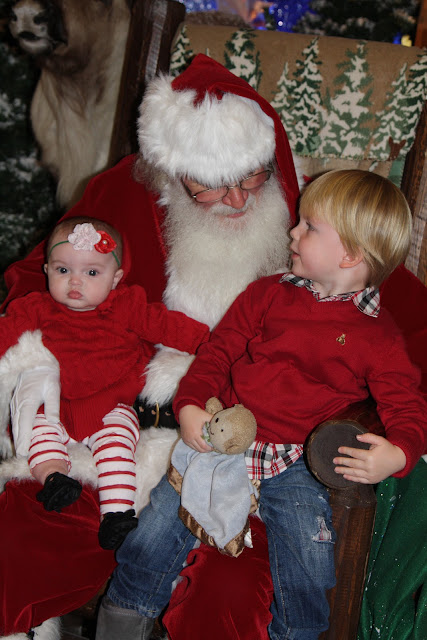 It was a picture perfect moment. Jett asked for a piano.  Lulla didn't scream her head off.  And Santa went on & on & on about what beautiful, wonderful children they are.

I'm with Santa. They are two absolutely wonderful & beautiful kiddos & I treasure their sweet little lives more than I can put into words. I wouldn't trade any of our moments--the perfect and imperfect ones for anything.

Posted by happeningsofourhome at 9:00 PM