This girl is a hot mess. 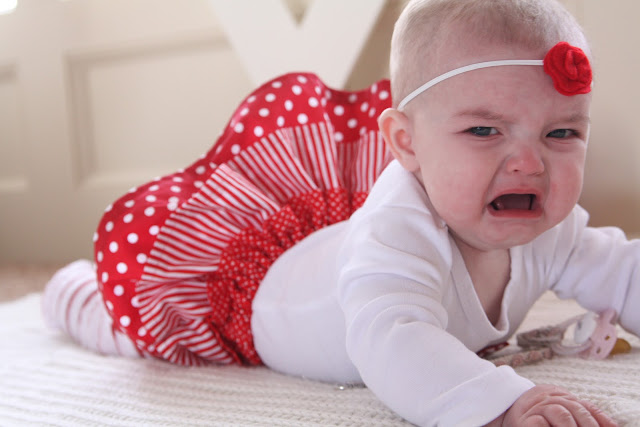 There's just no sugar coating it, people. She is putting this ol' momma through the ringer. At only eight months old, she has come & nabbed up the Most Stubborn Chick title right out of my hands. And let me tell ya something-- she is owning that title like a little boss.

And if the regular I'm ticked off you'd better come pick me up cry isn't working quickly enough, girlfriend has discovered a new cry that that'll do the trick in a hurry--one that sounds like she is being physically harmed in the worst of ways. It's bad. And now that she's discovered it, there's no turning back. It's her go-to cry--even for the smallest of offenses. The other night a friend I went to college with, & her family {who Lulla had never met before} came over for dinner. When my friend spoke to Lulla, Lulla let the poor girl have it with the most blood curdling cry you've ever heard. How dare anyone speak to her?! Just the other evening, Jett let out a squeal that startled little sister & you guessed it--full on let loose of the lungs session. And the worst part of this cry? It makes Jett cry. Today Little Miss tipped over from a sitting position & that upset her royally, resulting in the usual gasping for air wailing bit. Before I even had a chance to pick her up & remedy the situation, Jett breaks into full tears & melt down of his own. When I asked Jett what was wrong, his reply-- "Sissy is scaring me!" Oh, mercy me.

She's no easy baby. She's not laid back like everyone said the second child is supposed to be. She stands my nerves on end daily with that stubborn crying. And while I complain about it, while I laugh at the sweet red headed lady at the grocery store who says every single time we come in, how she could just take Lulla home with her, {all the while I'm thinking, Ha! You'd bring her back in a flash!}, while I get absolutely nothing done all day long except for making a dent in my couch by holding her--I just can't help but love this little stinker with all that I am. 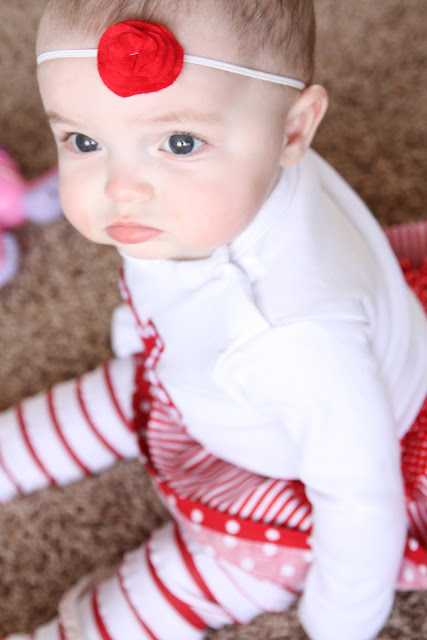 She's a mess, alright. But she's my mess. And I love her. Oh, how I love her.  And when she isn't crying with every ounce of might she's got in her, here's what she's doing at eight months old:

*Sitting up completely on her own.  Now, that doesn't mean I can go & leave her sitting by herself. Oh, no. I must sit with her. Because when she's all done, she throws herself backward--with force. I think it's her way of keeping Momma on a short leash.

*Her stranger anxiety is getting better. As in, she doesn't greet her grandparents & other familiar faces with a pouty bottom lip anymore. She smiles & laughs with them. She lets them hold her. She doesn't watch Momma's every move while she isn't in my arms.  She is making big strides, this one.

*She is coming around to the idea of baby food. For the first few weeks, girlfriend was not having it. She gagged. She cried. She pursed her lips. I tried fruits, veggies, cereals--she wanted no part of any of it. So I stopped trying to force it down her & we took a break from solids. Instead of stressing the both of us out, I figured the best thing I can do is follow her lead. She'll let me know when she's ready. I recently started introducing it again & she is slowly showing more interest--as long as she is the one holding the spoon, that is. Pears seem to be the fave for now. Pears, it is. 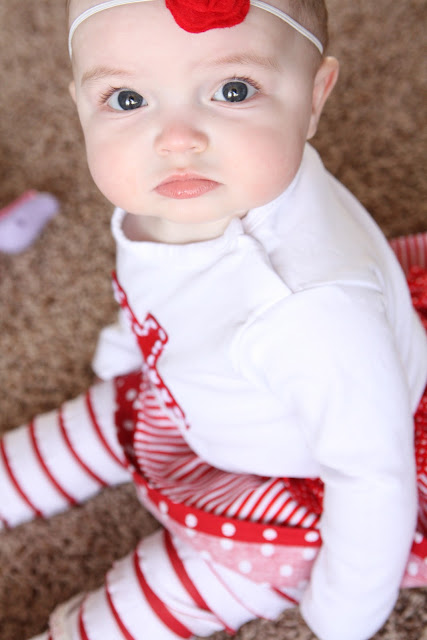 *She waves hello & goodbye. At first I thought it was a fluke, but after a few times I realized she knows exactly what she's doing. She lights up & waves that little hand & gets so proud of herself when she does it. It is incredibly precious.

*Until just the past week or so, if she needed to get somewhere, she figured out she could roll & roll & roll until she reached it. But just here recently, she has begun stretching those chunky legs out & using her toes to push. She grunts. She reaches. Then she gets ticked & cries because she isn't going anywhere quick. Little does she know just how much progress she really is making. She'll be moving & shaking before we know it. 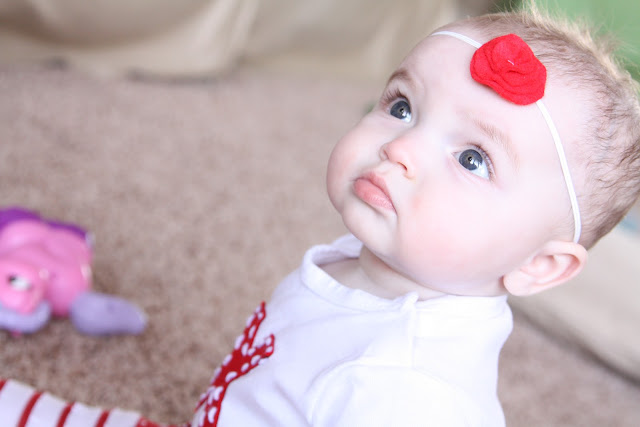 She's feisty & stubborn, dramatic & over the top. And in all honesty, I wouldn't have her any other way.

Well, just a smidge less crying could be nice. But other than that, we'll keep her just the way she is.

And since I missed a seven month old post--here's a pic of miss Lulla Beans at seven months: 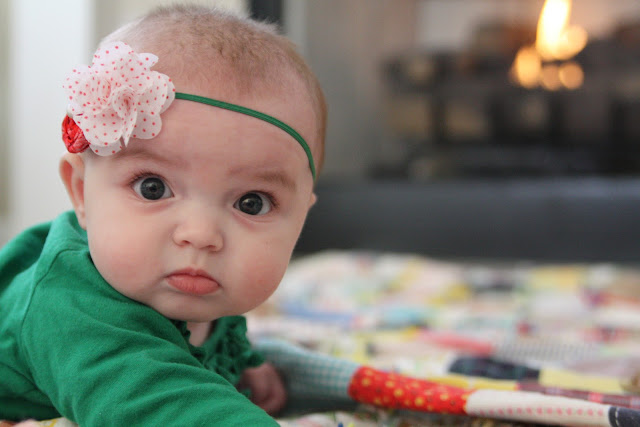 Who, me? Stirrin' up trouble?
Posted by happeningsofourhome at 1:34 PM