We've been having a bit of a rough go around our parts lately.  Maybe it's the freezing cold weather that's giving us a bad case of cabin fever.  Or perhaps it's the three year old uncharted territory we are nineteen days deep into. Whatever it is, I'm ready for brighter days. 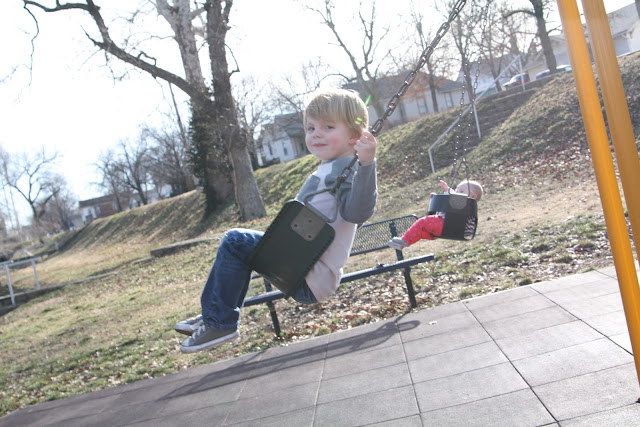 Valentine's night was going grand. We had a Bo-Ling's picnic dinner on the floor of our living room while Jett bounced around between bites, so excited for the special treat of eating somewhere besides the kitchen table. We enjoyed gooey, fresh-out-of-the-oven cookies for dessert. We had a dance party in the dining room {which has been deemed the "play room" because well, when you don't have dining room furniture in a dining room, it quickly becomes a catch all for toys}. Life was sweet. Sweet as sweet can be, really.

And then it all hit hit the fan. And if you'd like a definition of just exactly what hitting the fan means, I invite you to come on over to our homestead any weeknight between the times of  5:30 & 9 o'clock at night. You may want to bring popcorn--'cause it can prove be one doozy of a show. Three years old--it's doing a number on us. Screaming, crying, slapping, throwing things, using the word "no" as if it's the only one in his vocabulary, putting up a fight at dinnertime, bathtime, bedtime...anytime. I'll be honest, it has completely taken me off guard & I wasn't at all armed & ready for all the heat that three is packin'.

On this particular night-- Valentine's night--it went down a little something like this:  Jett screamed through his entire bath & tossed a soaked washcloth at me, resulting in a spanking & being sent straight to bed. I spouted off to Jared, something along the lines of how I feel like he never does the disciplining, leaving me constantly feeling like the bad guy. I stomped up to bed at 8:50 p.m., leaving Jared downstairs in the living room by himself.  I cried myself to sleep, feeling like a failing mom & a crummy wife. Happy Valentine's Day.

We've been snippy. We've been short tempered with one another. We've been counting our sorrows & not our blessings. Our fuses are fried down to nubs.

I don't know how you all deal with spouses who are on your nerves & little ones who need to run off pent up energy from their little systems, but me? I need a breather. So when Sunday afternoon offered up a spillage of sunshine,  I jumped on the opportunity to get out of Dodge for a bit. I loaded up my kiddos, a scooter & a Baby B'jorn & drove until I found an exit marked Change of Pace--otherwise known as home. 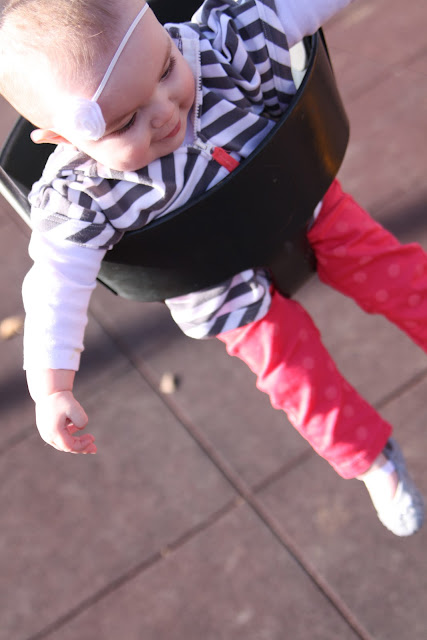 Little sister's first time in a swing. She wasn't quite sure of the idea at first, but it didn't take long for her to warm up & for that smile of hers to spread across her face. 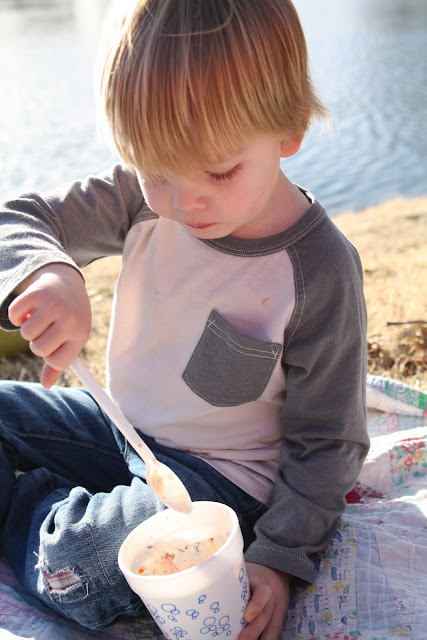 It's amazing the difference a change of scenery can make. A visit with Papa & Grandma, a park playground, an ice cream treat eaten lakeside & a couple hours on a four lane highway can prove to be really, really good for the soul--both the kiddos' & a momma's. 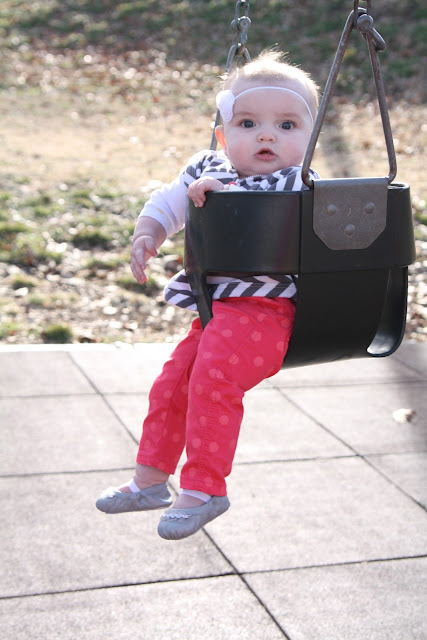 That night, just in time for evening baths, the kids & I rolled back into our neighborhood. As we rounded the turn on our street & I reached up to trigger the garage door opener, I could feel that my shoulders were carrying much less of a load. The foggy vision I had left the same house with earlier in the day had been replaced with a clearer, renewed outlook. And my lungs, instead of the heaviness that had weighed them down, were now filled to the brim, full of the fresh air I had inhaled throughout the day--at the park, pushing bucket swings & spotting fearless climbers. 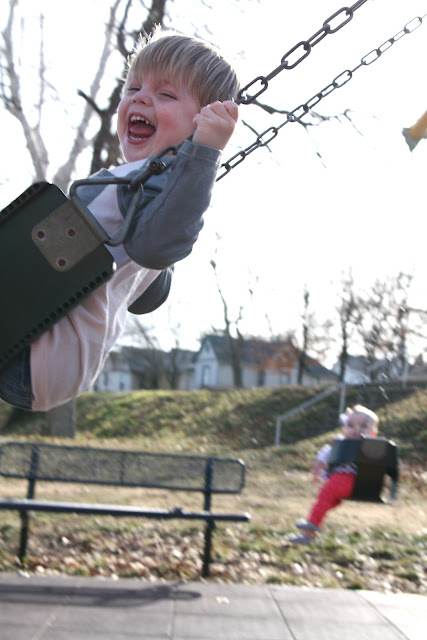 We were greeted at the door by a daddy who had taken the opportunity, while we were out of the house, to tackle some of the big projects he'd had looming over his head for some time now. Together we lugged in two tuckered out babies from the car, ones who hadn't even an ounce of energy left to put up a bedtime routine fight. 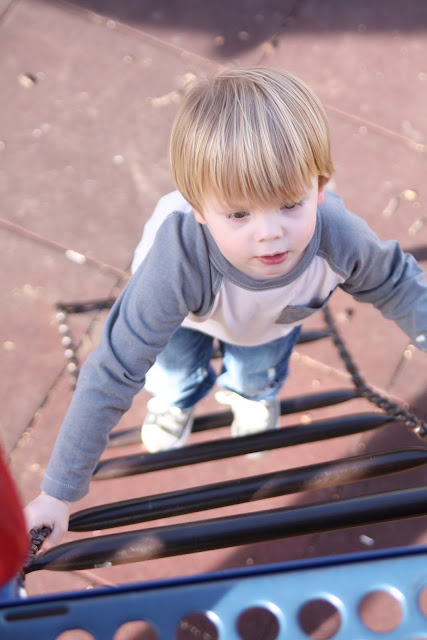 I know these three year old shenanigans are just a phase & simply a speck in the grand scheme of Jett's precious life. Jared & I will figure out as parents how to come together against the fury of three & become a united front so that we aren't so easily divided & conquered. I know these long winter days, where we're cooped up & about to wring each other's necks--they'll melt away. Spring will blossom & bloom & beg us to come out & play & we will happily do so. 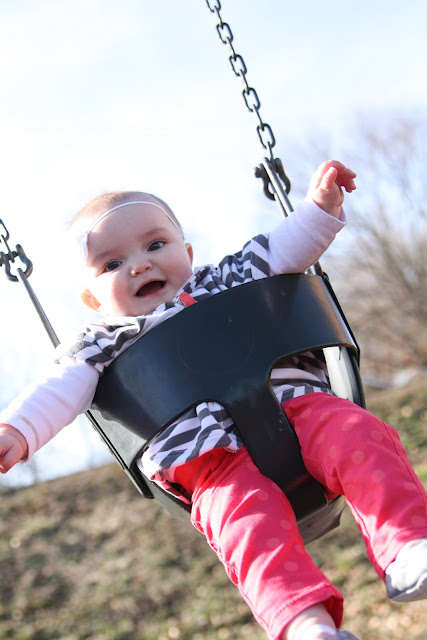 That little Sunday afternoon breather changed the course of direction life was traveling us on. It was just the thing we needed as a family to re-set & re-start. And in the meantime, until 60 degree weather decides to settle in & unpack it's bags, you can bet I'll be keeping my eyes peeled for the next break in the clouds--for the next breather that's tossed in our direction. 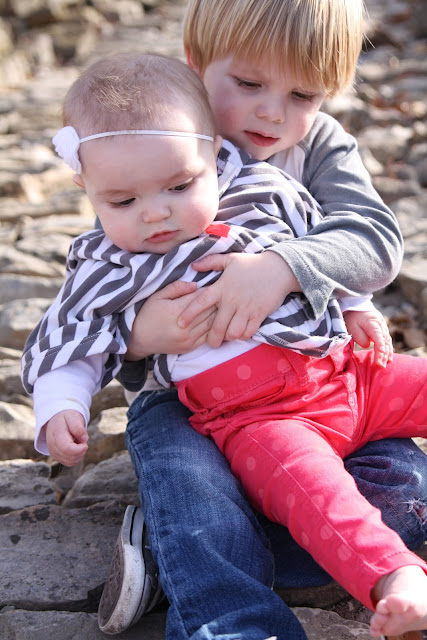 Posted by happeningsofourhome at 9:21 AM