My brother had a pet chicken when he was little. No lie. His name was Jack. Jack the chicken. Oh, the memories our hearts hold of that little chicken named Jack.

Jack's life began in a first grade classroom, where a dozen & a half sets of eager eyes waited patiently for fertilized eggs to warm inside an incubator & to finally, many days later, emerge as pecking, cheeping, tiny baby chicks. Amongst that group of pecking, cheeping, tiny baby chicks was a little ball of fuzz, soon to be named Jack. Curtis had to have him. And my parents were always pretty cool about that sort of thing, being that we lived in the country & all, so they said yes & built Jack his very own coop.

I remember Jack clear as day, my most vivid memory being the one where he received flying lessons from his six year old owner one afternoon, right there in our own backyard. My brother Curtis, a small statured six year old boy, with a fiery spirit the size of this universe was up to one of his tricks again. I'd bet just about anything that there was dirt caked under his fingernails,  holes torn across the knees of his jeans, & a frog wriggling in his pocket--that was him & that's who I see when I picture six year old Curtis. There he was that day, running as fast as he could {& he was fast} across the yard...with a tiny little chick perched on his back, just a flutterin' those fuzzy yellow wings to beat the band. Curtis wanted that chicken to fly. And Jack did his best. He fluttered & sputtered & I'm pretty sure he caught more air than any other chicken that ever lived. He actually seemed to be having as much fun as my spunky little brother was. He was an adventurous little chicken. I suppose he didn't have a choice, having Curtis as his owner.

I tell you this story of Jack the chicken to tell you this-- yesterday, on the first day of Spring, when my brother showed up to spend the day with me & the kids, I knew just the adventure we needed to go on. I knew in my heart there wasn't a soul on the face of this earth that would enjoy what I had up my sleeve more than my brother--even the twenty-seven year old version.

So off to the local farm & feed store we went.

To visit the newest hatchlings. 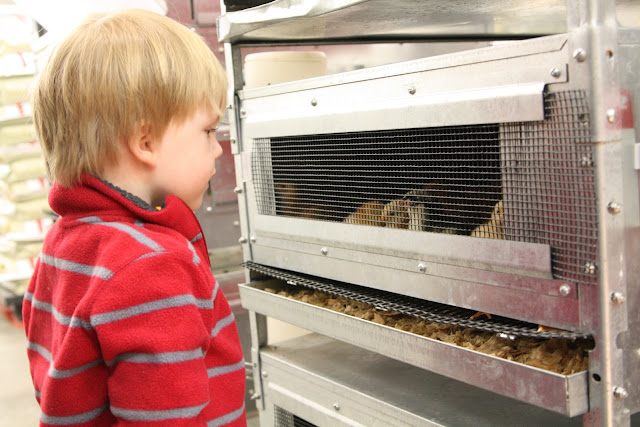 They were a noisy bunch, these chicks. Although located clear in the back corner of the store, their cheep-cheep-cheeping could be heard the moment we walked in the front doors. We were greeted by the friendliest store clerk, a lady I'm guessing was in her 50's with graying blonde hair & oversized glasses, who made us feel immediately welcome, as if she were inviting us into her very own living room. She took one look at us & exclaimed, "You here to see the baby chicks & bunnies? They're back there! You can't miss em'!. They're noisy! And we've even got baby ducks back there, too! ". We caught the come on in & make yourself at home vibe & oh boy, were we excited. 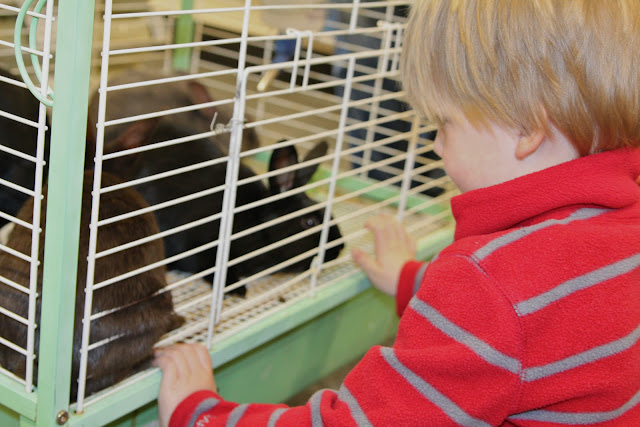 Jett was dying to get his hands on these bunnies. Sticking his finger through the cage just wasn't cutting it & he was begging to hold them. I'm a rule follower. I always have been. I'm black & white, cut & dry & if there isn't a sign that says we can pull the bunnies from the cages & hold them, this momma just isn't going to do it. I know, I'm no fun at all. But lucky for Jett, Uncle Curtis' fiery spirit hasn't dwindled in the least. That six year old universe-sized spirit is still a-blazing & he's just the opposite of me--as in--if there's no sign saying you can't pull the bunnies from the cage to hold them, then what's the problem? So he did it. He pulled one out, let Jett pet it & quickly tucked him back in with his bunny friends. I don't have pictures because I was scared we were gonna get caught & my armpits were sweating & I was looking over my shoulder & I wasn't thinking straight to change my camera settings & all the pictures I frantically snapped turned out blurry. Rule follower here. 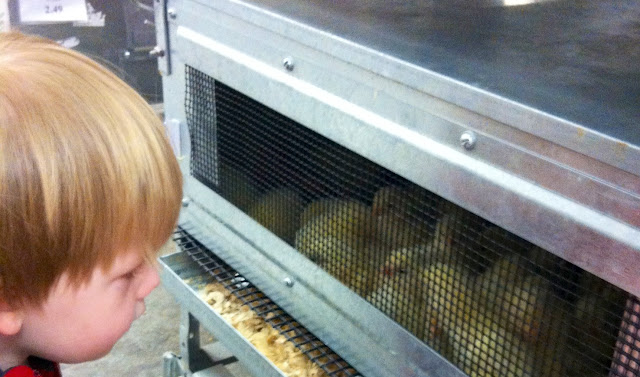 The chicks were an even bigger hit with my boy. There were dozens upon dozens of baby chicks--groups of itty bitty ones, groups of more mature ones--there were so many. We'd put our finger up to the cage & they'd all bounce over to it & peck at it. And while Jett had begged to hold the bunnies, this time he was begging to bring the chickens home with us. When I told him we don't have a home for chickens, he then begged that we buy one of those too.

**Grandma....Papa....didn't you mention that you're spending an awful lot of money on organic eggs? I'm just sayin'...**

Okay, now you're gonna need to brace yourself. Because I promise you, you have never seen cuteness like this ever in your life.

The highlight of our trip... 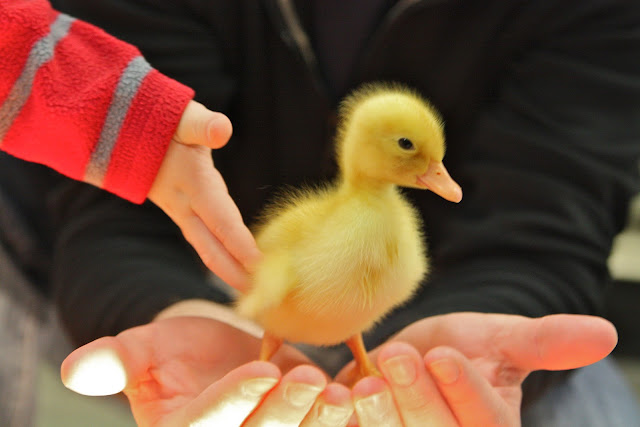 Is this little guy not the freakin' cutest thing ever? He standing there all puffed up & proud like he's proclaiming, "I'm a duck."
**Grandma & Papa--can we add a duck pond to our wish list, too?** 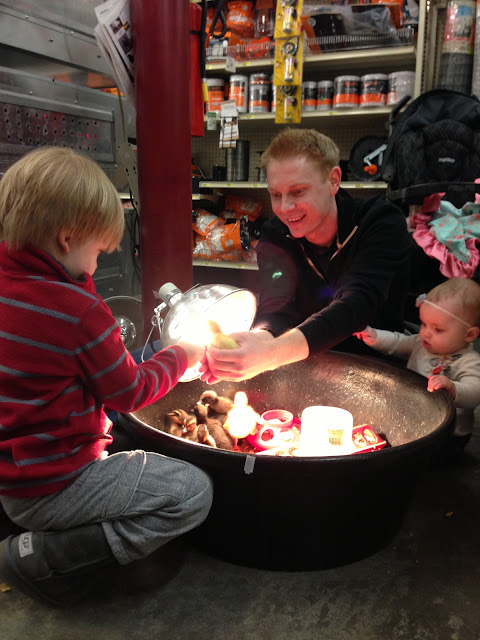 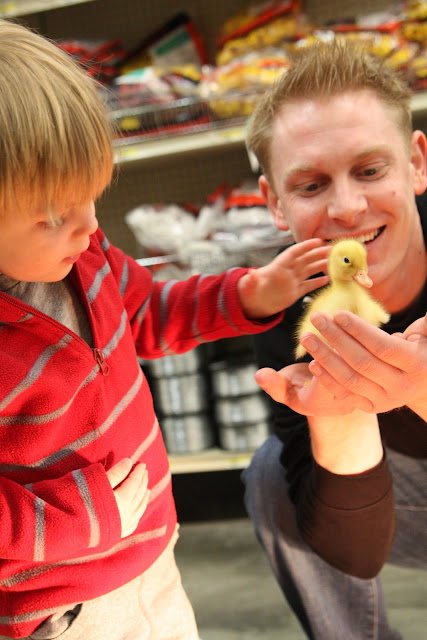 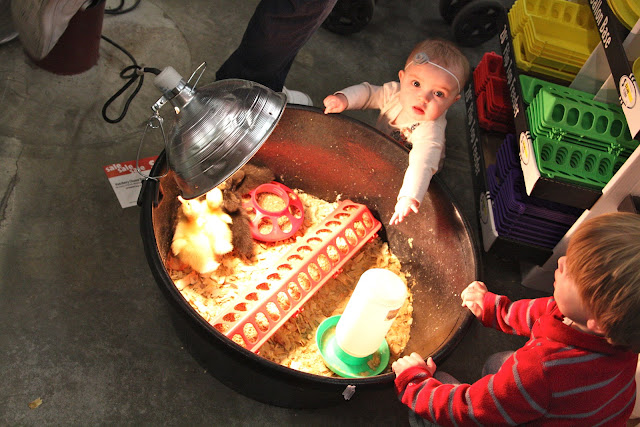 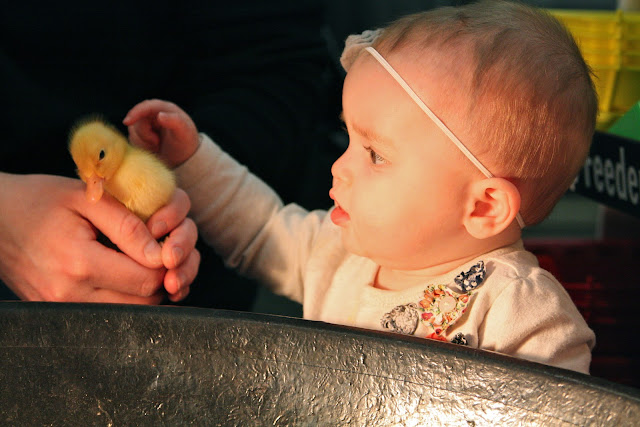 Who knew so much adorable-ness could fit into one photo? Seriously. 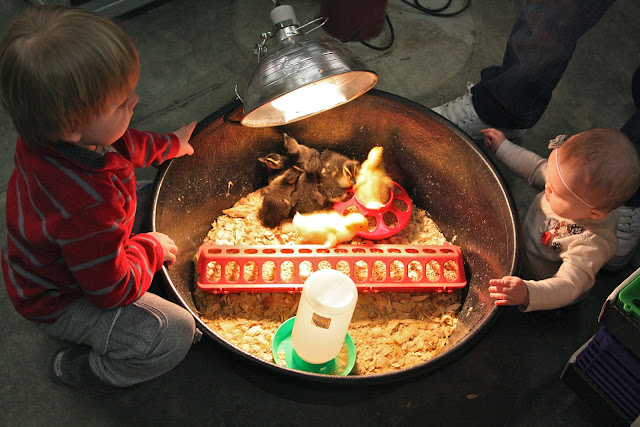 I honestly cannot think of a single better way to have spent the morning of the first day of Spring. Memories were stirred. Memories were made. And memories were intertwined with one another. And that is so my thing. 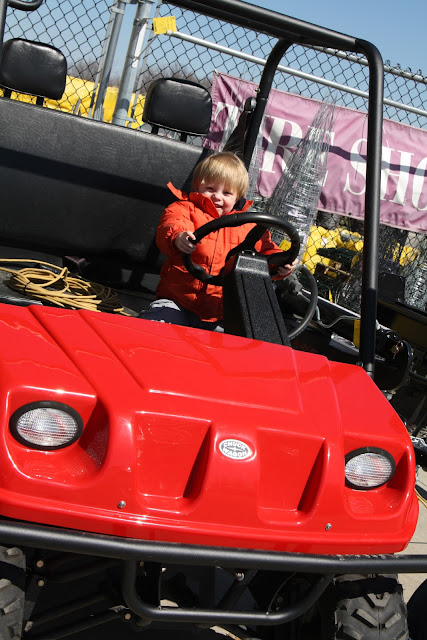 Posted by happeningsofourhome at 8:02 PM