St. Patrick's Day was just all around funny at our house this year. 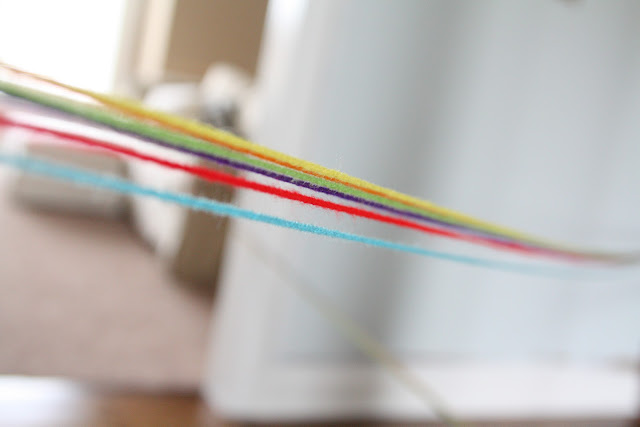 I woke up Saturday morning, eager to get the festivities rollin' for the kiddos. I started by pulling outfits of green from their closets. Nothing fancy--a jet plane shirt & Mater socks for Jett & the only green article of clothing I could find in Lulla's closet--a hand-me-down, six month sized Carter's shirt that was two sizes too small.  But hey, they were dressed {before noon} & festive & this momma was feeling accomplished.

Next, I grabbed my bag of supplies & set out to string a rainbow of yarn throughout the house #pinterestdoesitagain. {Oh boy, did I seriously just hash tag in my blog post? I swear, I am beginning to think in hash tags. #socialmediaisfryingmybrain.} A twisty, turvy, zig-zaggy rainbow that would eventually end in a pot of golden chocolate coins. 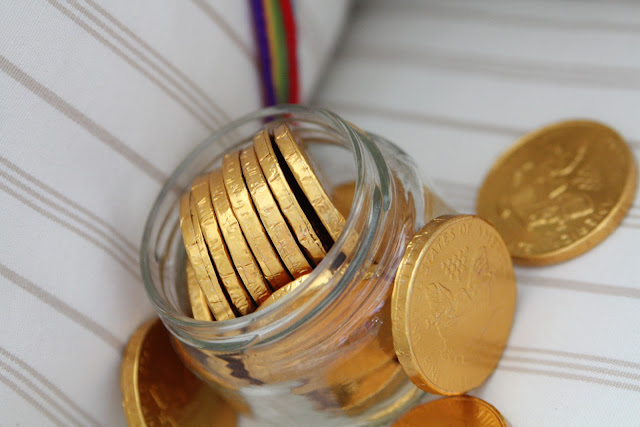 Jett's eyes lit up when he came down the stairs to find sea of colors covering the entire downstairs living area. He winded & gathered & wadded up yarn into his fist & used every bit of self-discipline he had to not simply ditch the ball of yarn & run to where he could clearly see the rainbow's end. Finally, his perseverance paid off & little man struck gold. 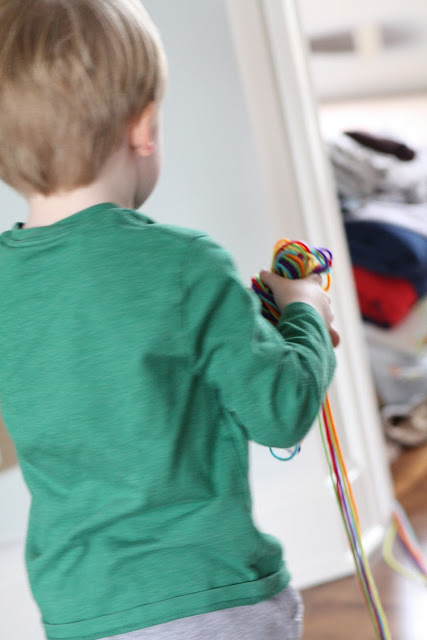 Together, Jett & Lulla sat on a rainbow & tallied up their coins. And all was swell. 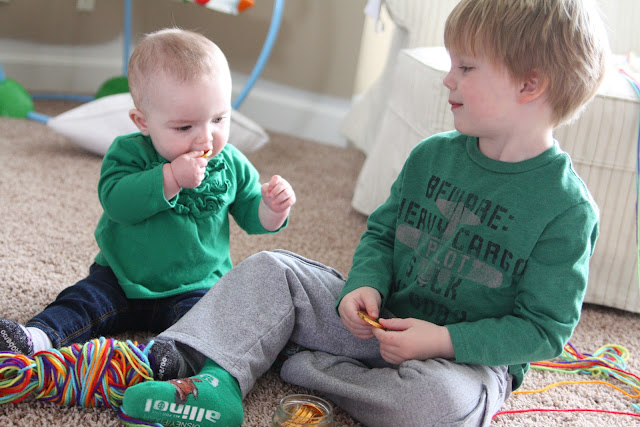 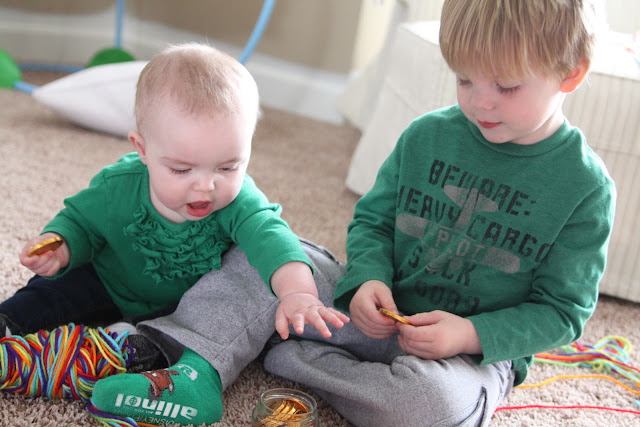 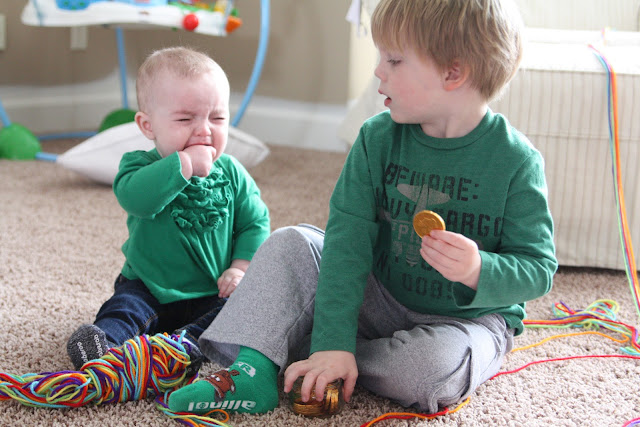 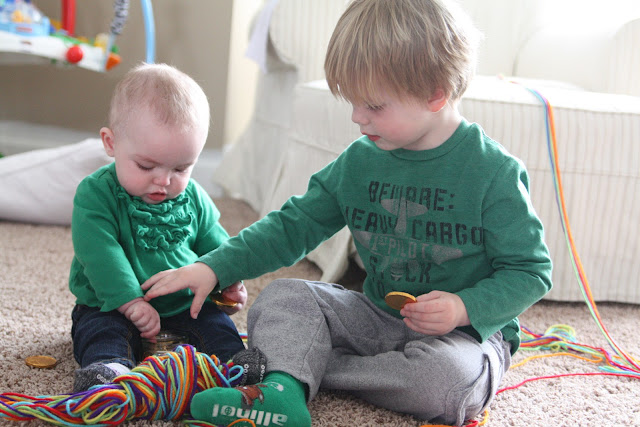 After a little coaxing, he lets her have the the whole pot. But only for a second.  Then he snatches it back. 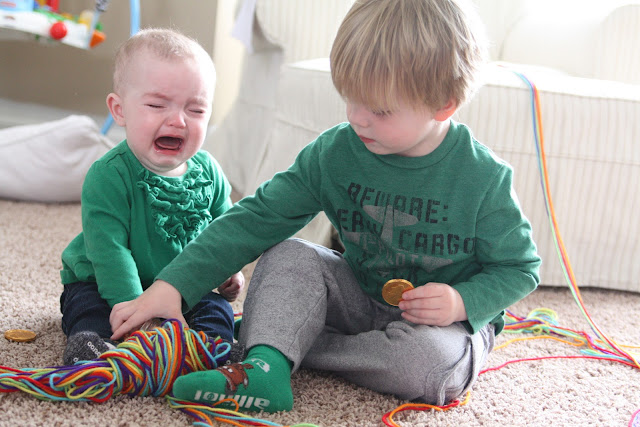 Homegirl ain't goin' down without a fight. Look at her holding on to that pot of gold. 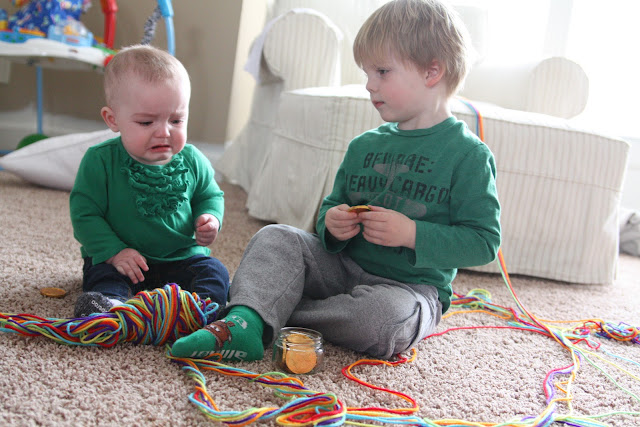 If looks could kill.

What these pictures don't show, probably because my eyes were bugging out of my head & my jaw was on the floor & I was asking my husband, "How does she know how to do THAT?!", was that when little miss Lulla Cate's hissy-fit failed to work it's charm on her big brother, she took a swing at him--swatted him good, right in the arm. Oh. boy. howdy. This girl is a handful. 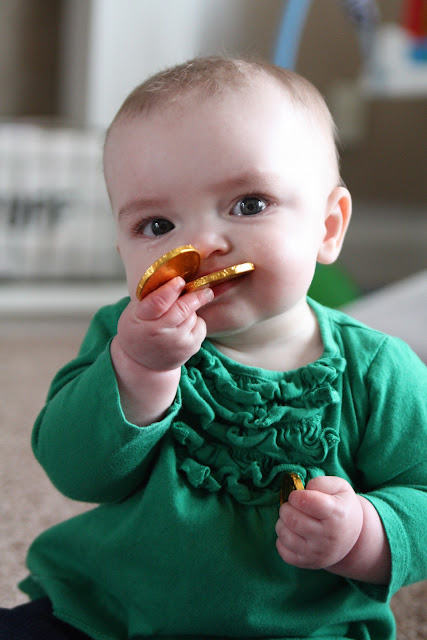 The pot o' gold tizzy concluded when we found out that Lulla didn't want the whole pot of gold-- just a fistful of it. And Jett was as happy as a little leprechaun to share that with her--after all, there was still plenty left over for him to have a chocolate coin breakfast. So there. Despite alligator tears & sibling brawls, it turned out to be a pretty good St. Patty's Day.

I came to the realization that it wasn't really St. Patrick's Day. That I had just celebrated, done the whole darn sha-bang, a day early. Oops. Hopefully the kids won't be scarred for life. 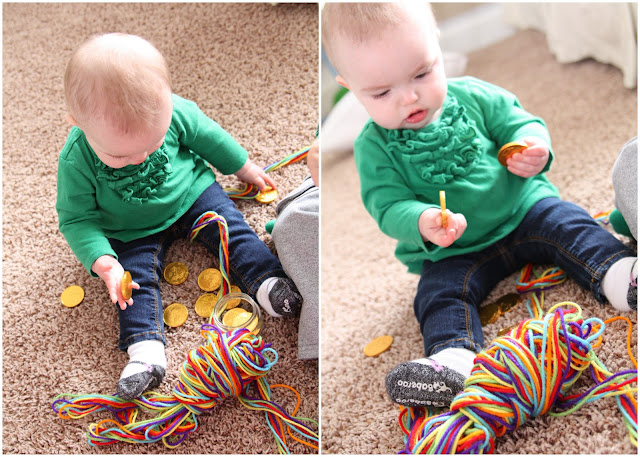 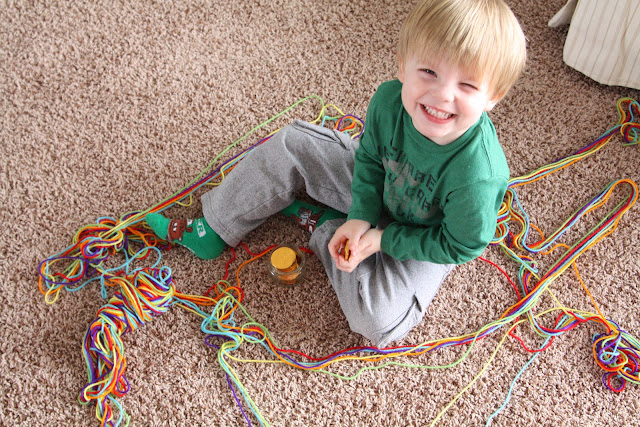 Ya see there? Now you can understand why I've not blogged in almost a month & perhaps you'll bear with me. My brain has been a fuzzy/foggy mess & I am not operating at full steam these days. I've been in a little funk over the past month-- fevers, flus, colds, house decorating drama--it's all been a little overwhelming. But I promise, I'm crawling myself out of my little funk, I'm dusting off & I'm getting on with it. More blogging to come.

Posted by happeningsofourhome at 6:49 PM