Oh, don't mind me. I'm just over here cannon-balling off my own little diving board.

That school bus that just passed by my house? Pretending I didn't see it. The chilly evenings that are dangling Fall in front of our faces? Ignoring them. The quietness of the neighborhood that has replaced the shrieks & shrills of children running through water sprinklers? Blocking it out.

I'm not ready for summer to be over. I'm just not. It seems as though it was the most fleeting summer I've ever experienced & I'm bummin' hard that it's going...going...gone.

It's been a good summer--a really good one. And though I know Autumn is just around the bend & offers every kind of good fun that I live for, I want to celebrate summer just a while longer. So if you're like me & feeling a tad gloomy over summer coming to an end as well, come along. We'll hold hands & make a big splash into deep water denial together.

Some of our summer celebrations as of late: 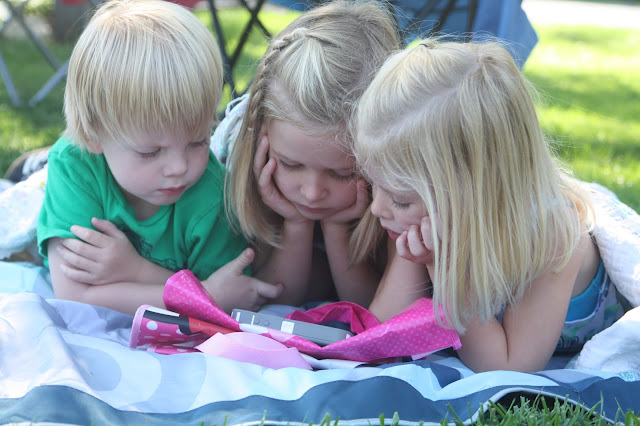 Killing time while waiting for the parade to begin. Sidenote: I overheard Jett the other day while he was playing, saying he had two girlfriends. When I chimed in & asked him who they were, he proudly announced the names of the two little blondies pictured above {who just so happen to be sisters}. Oh, boy. 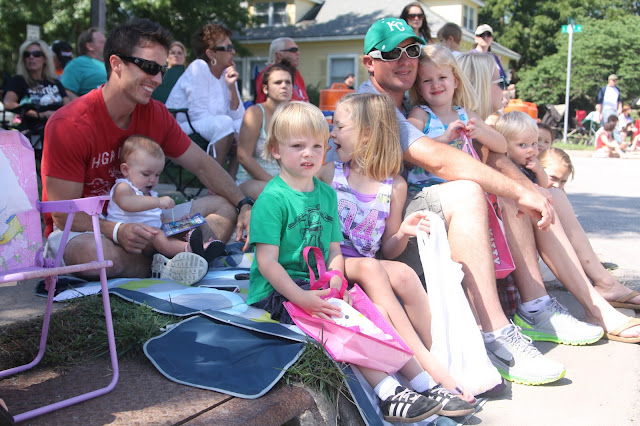 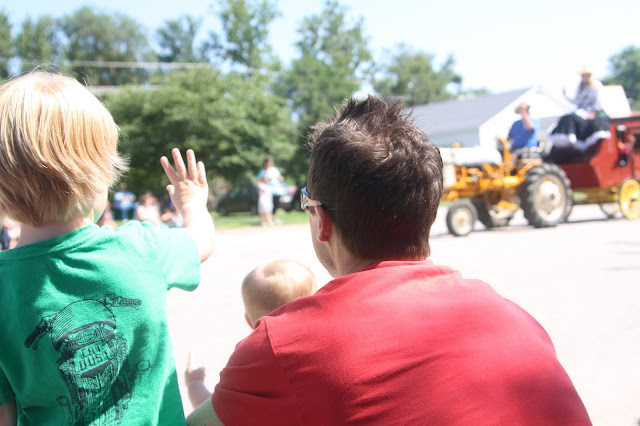 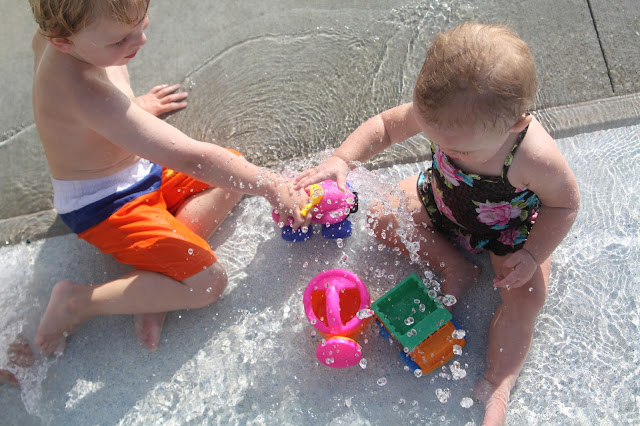 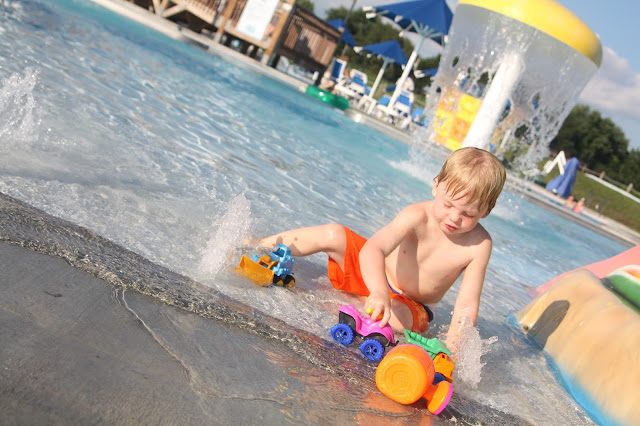 With the shortened pool hours, the crowds have scaled back & we've been able to have the pool nearly all to ourselves. 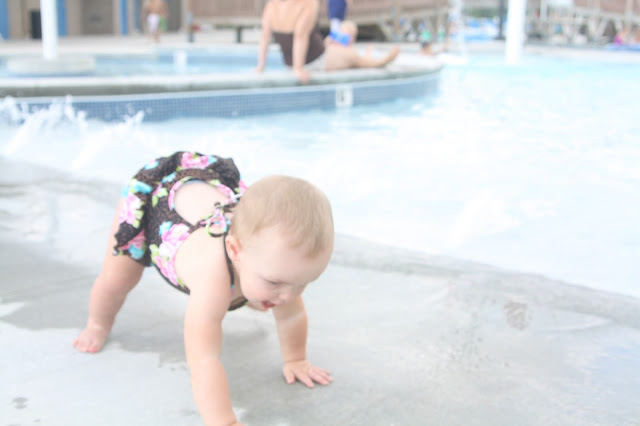 She is full on walking. But only in grass. And only on carpet. No hard surfaces. Wood floors, tile, concrete...& out comes this bear crawl.

His favorite thing to do at the pool.

Little fish swimming under the water. 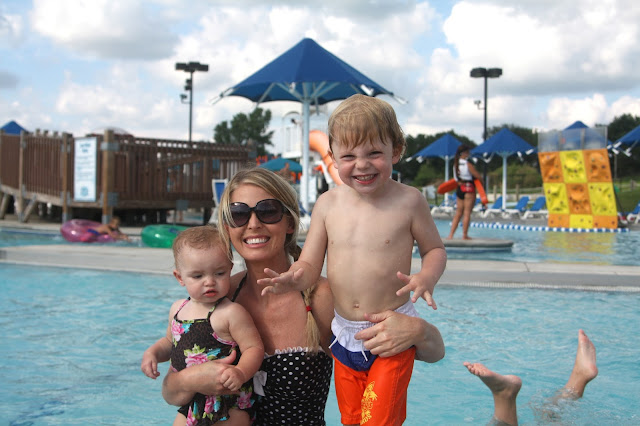 This photobomb makes me laugh. 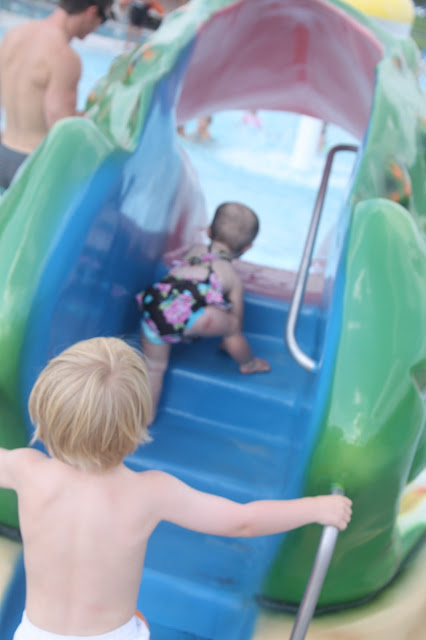 She's too little for this slide. But try telling her that. 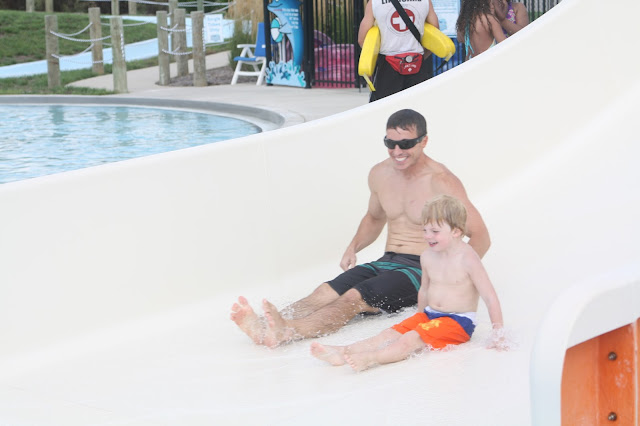 He became so brave around the water this year. 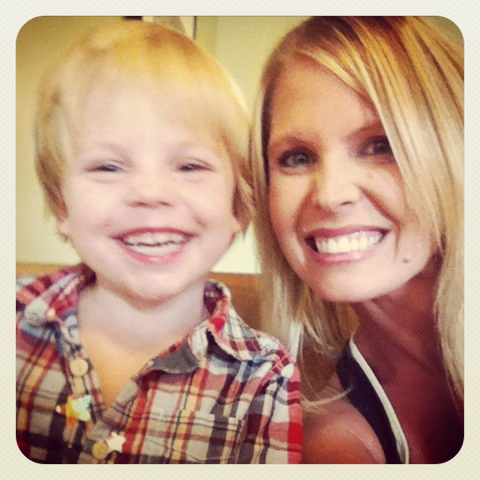 Noodles & Co. for dinner {per his request} 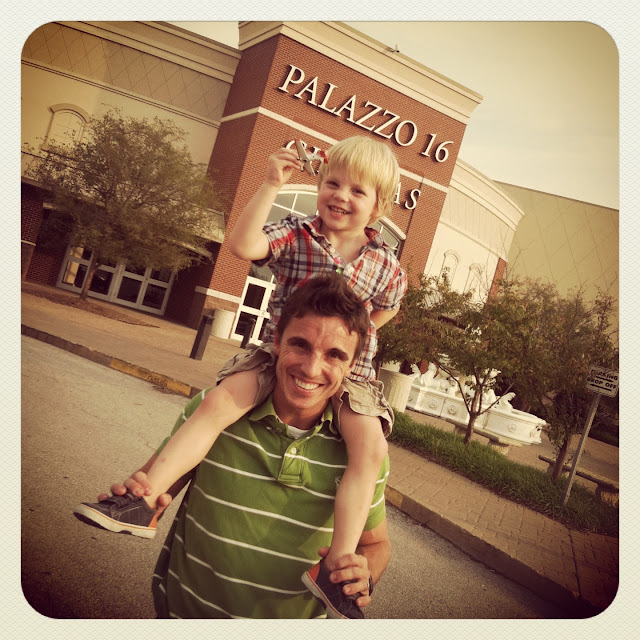 His first movie at the theatre: "Planes" 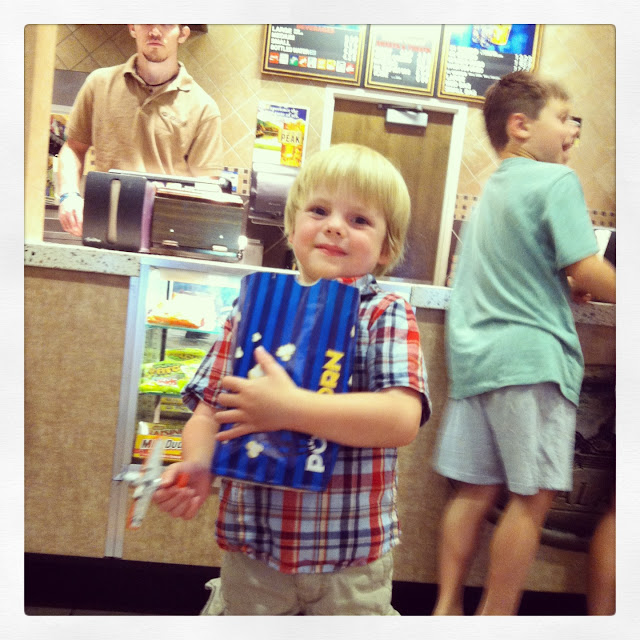 "Dusty" in one hand & popcorn in the other. All set to go! 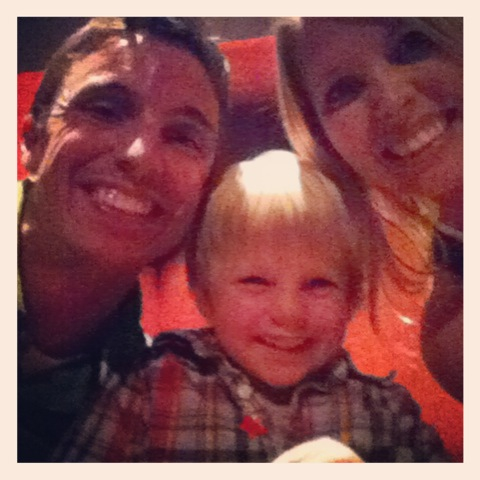 We waited a long time for this movie to come out & though there have been some mixed reviews, we thought it was incredibly cute. Jett loved it--hasn't stopped talking about it, in fact. He has started collecting the Planes figurines.  He is already asking me when we can buy the movie. He questions me on a daily basis about some of the scenes from the movie. It was a really great first movie for him. But here's the part where I'm not sure whether or not I should stamp a big, fat COMPLETE SUCCESS or EPIC FAILURE on Jett's first movie go-er experience. Let me preface this by telling you a little something about my Jett Jett. He's not a make a scene kind of kid. He has always been very aware of his surroundings & not one to draw attention to himself. He's never let a tantrum rip in the middle of a grocery store. His face turns red when a stranger speaks to him.  He's just not that kind of kid {now his sister--a whole 'nother story}. But on this particular evening, we had ourselves a scene. A big one. The moment the credits started rolling, this kid lost it.  He wailed. And sobbed. And grieved like I've never seen him grieve. In between gasps for air, he bellowed, "Don't want it be OVERRRRRR!" & this is what he repeated & continued to repeat about a thousand times...through the theatre, out the doors, through the parking lot, in the car, all the way over to Coach & Gigi's where we picked Lulla up. The tears just streamed & streamed & streamed. He cried his little heart out until his face was a blotchy, tear stained sight to see. Some moments Jared & I found it to be kind of funny & the next moment our hearts were breaking right along with him. He finally settled down on the car ride home & then proceeded to ask me every single question he could possibly conjure about planes & propellers on planes & wings on planes & antennas on planes. Everything & anything about planes, we covered it on that car ride home. It was a very sweet night & one I think we'll all remember for a long time. But you see my dilemma, right? Success or failure? I do not know.

A Camping We Did Go: 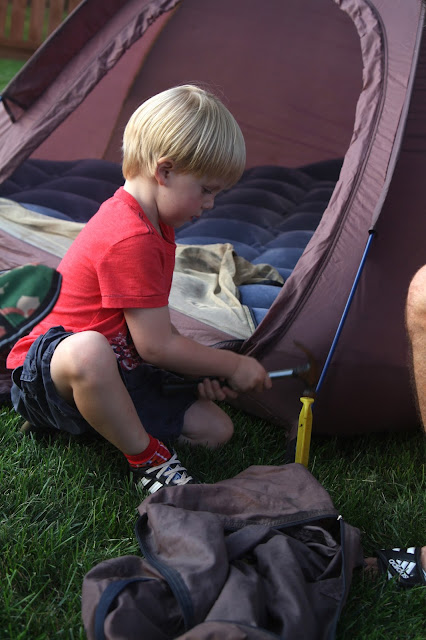 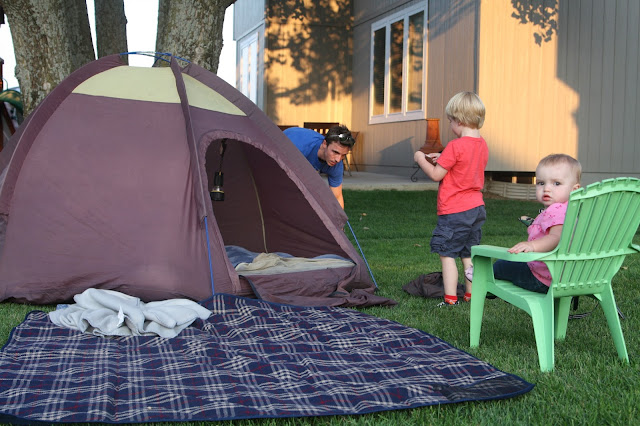 Jared camped in this tent when he was a kid & became highly offended when I said it was old & stinky. 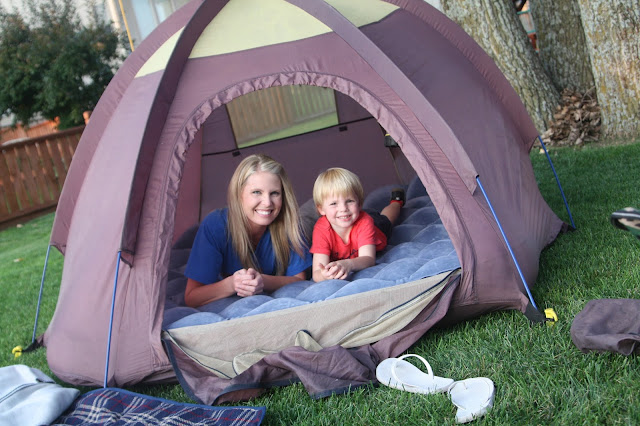 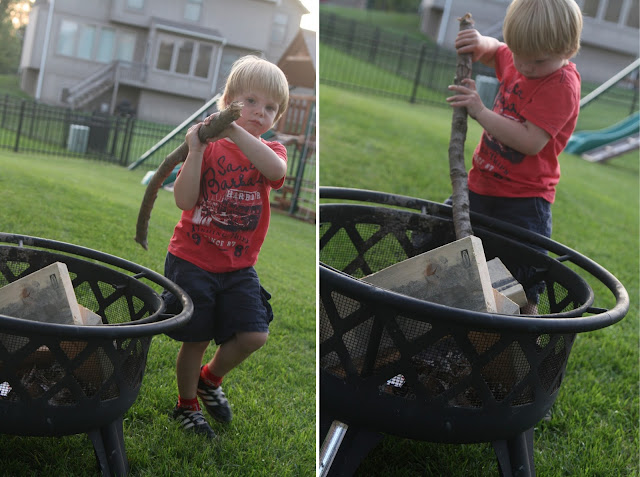 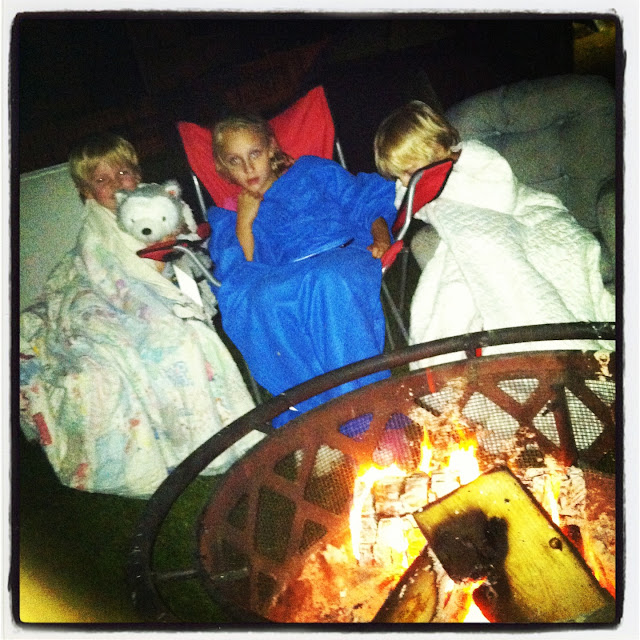 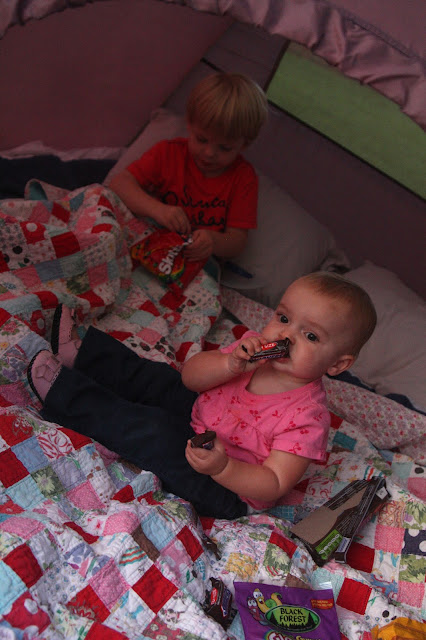 I cozied up Old Stinky the tent with warm quilts & a pile of goodies to snack on for the boys & Lulla girl & I headed in to spend the night in our own beds. We'll need a bigger, fresher smelling tent if they plan to get us girls in there for an all nighter.

Besides the sprinkler system giving the guys a wake-up call, spraying the outside of the tent at 6 a.m., the boys' first camp-out went off without a hitch. There were hotdogs & s'mores, laughter around a smoky fire & a good sleep in the great outdoors--all the things that make for a great camping trip. I do believe a real camp-out at a real campsite may be in our near future.

Just a few more summer celebrations await us & then I promise, I'll quit my whining about summer coming to a close.

Posted by happeningsofourhome at 7:19 PM